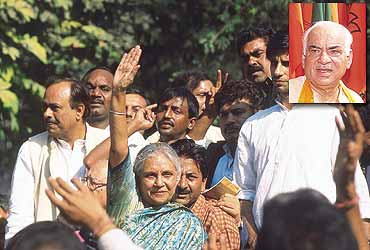 It's harder for the BJP to rely on anti-incumbency alone to defeat the Congress in Delhi. Chief minister Sheila Dixit has proved an efficient administrator. She's currently receiving kudos for the successful privatisation of power supply, the inauguration of the Metro and speedy construction of flyovers. So, instead of making governance an issue, the BJP will capitalise on the fact that it enjoys the support of the central government. Unlike in any other state, the central government can actually influence the outcome of an assembly election in Delhi.

That's where Delhi BJP chief Madan Lal Khurana comes in. He's a formidable opponent in that unlike other BJP leaders, he understands Delhi's problems, has a hold over the bureaucracy and can get the Centre to do what he wants. He has an excellent equation with Lieutenant-governor Vijai Kapoor and has his own man as dda vice-chairman. Besides, he can also rally 16.5 lakh Punjabi voters.

Even so, the tremendous boost to workers' morale courtesy Gujarat is welcome. Ironical, considering Khurana—a moderate at heart—wasn't happy with Modi's appointment as Gujarat CM. But BJP leaders in Delhi admit that pro-Hindutva voters who had been alienated from the party in recent years may now return. In fact, rumour has it that the VHP may hold a massive "Ayodhya rally" in Delhi next year to mobilise its traditional votebank. The VHP, which has an influential network of temple committees across Delhi, had deserted the party during the municipal polls. It is now more kindly disposed to the central leadership after Vajpayee hailed Modi and his Gujarat win.

However, BJP leaders feel that while a Hindutva undercurrent is inevitable and welcome, militant Hindutva could be counter-productive. Violence in the city, which has 9 lakh Muslim voters, does not go down well with the electorate. Dismissing the possibility of a "Hindutva wave" in Delhi, Khurana says, "In the next six months, I will solve Delhi's problems. We will win the elections not because voters like my face but on the basis of our work."

Another challenge for Dixit is the long, hard summer before the polls. Scarcity—whether of power, water or onions—impacts powerfully on the voters. That's what angered the BJP's traditional Baniya-Punjabi votebank—the largest chunk of 36 lakh voters—in 1998. These voters could return to the BJP. To counter that, the Congress is reportedly considering organisational changes. There's no question of changing Dixit, who's built up a positive equity with the electorate. The party also can't annoy the 15 lakh-strong Brahmin voters. However, Delhi pcc chief Subhash Chopra, a Punjabi seen as no match for Khurana, may be replaced by a Baniya.

It'll also be a united BJP which will be fighting the polls this time. Union labour minister Sahib Singh Verma is expected to rally the Jat vote in Outer Delhi, where Sajjan Kumar retains a hold but is still under the cloud of the 1984 riots. The Congress is also searching for a Gujjar leader in the absence of the late Rajesh Pilot, who could always be counted on to rally the 4.5 lakh-strong community.

Another subject no one speaks about openly is Delhi being notoriously susceptible to the foreign origin issue. Privately, Congress leaders admit that the BJP sweep of Delhi in the 1999 Lok Sabha polls owed more to Sonia's bid for prime ministership. But whether the "Sonia factor" will work in an assembly poll isn't clear.

The Heady Scent Of Royal Appeal