The CM is taking flak from all corners. A damning CBI report will hurt even more. Updates 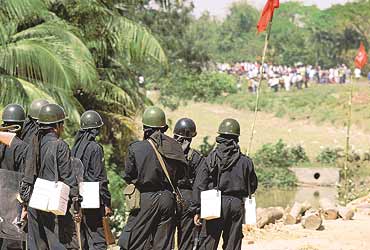 outlookindia.com
-0001-11-30T00:00:00+0553
A little over a decade ago, when Buddhadeb Bhattacharya was down and out, he penned a play, Dushamay (Bad Days). It reflected the trying times he was going through after labelling the Jyoti Basu government a "den of thieves" and walking out of the ministry. Today, Buddhadeb as West Bengal chief minister is in much deeper trouble. Whatever explanations he may give and whoever comes out in his defence, the fact is Nandigram has become the proverbial albatross round his neck.

A dark cloud now hangs over the aggressive industrialisation policy Buddhadeb was till the other day piloting, and the credibility he enjoyed till yesterday has severely eroded. In rural Bengal, people have lost faith in the government. Despite the many official explanations, they see Nandigram as an example of the state acting as autocrat, forcibly taking away farmlands and 'gifting' it to big business to build their factories and special economic zones (SEZs).

Such is the animosity that the government is scrambling to douse Nandigram-inspired bushfires all over Bengal. Rumours of land acquisition have sparked near-riots in the hinterlands. Last week, a visit by a team of officers to survey an irrigation project in North 24 Parganas bordering Calcutta triggered violence by villagers who torched the officers' vehicles and kept them hostage for a few hours, thinking they were there to identify land for acquisition. The state government has now been forced to put all land acquisitions on hold.

And that's not all. The impending CBI report on Nandigram will, say all available indicators, be severely critical of the police and may expose the role played by CPI(M) cadre in the March 14 troubles which left 14 dead and over 70 injured. A CBI source told Outlook the evidence points to the "CPI(M) deploying its musclemen to kill, injure, maim and rape the people of Nandigram". And apparently, they were supported in their efforts by the state police.

Last week, the CBI (which was handed the case by the Calcutta HC) raided a brick kiln near a spot where the CPI(M) had set up camp in late January. The raid led to the arrest of 10 men who confessed to being activists of the CPI(M) and affiliates like the DYFI. They were found to be in possession of countrymade as well as sophisticated arms, police uniforms and the cellphone numbers of top CPI(M) leaders like health minister Surya Kanta Mishra (who oversees party affairs in East Midnapore district where Nandigram is located) and CPI(M) local MP Lakshman Seth.

An intensive search in Nandigram has yielded live and spent bullets of prohibited bores like .315 and .38—which are not issued to the police. The 10 arrested from the kiln have confessed they were sent by CPI(M) leaders to help launch an assault on activists of the Bhumi Uched Pratirodh Committee (committee to fight land ouster), who are spearheading the protests in Nandigram.

The CBI is also coming round to the conclusion that the police firing was not justified—that it was a lapse on the part of senior officers who failed to control their men. Also, almost all the victims sustained bullet wounds above the waist, thus proving that the police fired to kill. All this, if impartially compiled and presented in the CBI's final report, may prove to be calamitous for Buddhadeb and his government. Especially damaging will be the mobile phone records of the 10 party musclemen that show they were in regular touch with key party functionaries.

Meanwhile, the spin from the CM's camp is that Buddha was misled by his senior colleagues in the party. They had apparently told him that if Nandigram wasn't brought under control, it would set a bad example. The CM trusted their judgement and gave the green signal to the police operation. Even so, the CM had made it clear that no force was to be used, which is what Buddhadeb's aides now say in his defence. Not surprisingly, no one believes them.

Former CM Jyoti Basu himself isn't very convinced about Buddhadeb's innocence. He's learnt to have told CPI(M) general secretary Prakash Karat, who called on him during a fire-fighting trip to Calcutta earlier this week, that the CM cannot shirk responsibility for the incident. Basu said that "naivete isn't an attribute that should be possessed by a person who occupies the CM's chair".

Criticism for Buddha has come from other Left quarters as well. Left allies like the CPI, RSP and the Forward Bloc too had last week threatened to walk out of the government, but have been pacified for now by the CM accepting their demands—for starters, withdrawal of police from Nandigram and an immediate halt to all land acquisitions.

Ten years ago, when Buddhadeb resigned as the information and cultural affairs minister, he found solace in Nandan—the state-owned cultural complex in Calcutta that's the hub of artists, writers and poets. He had many friends there who provided him support and succour during that time. Today, even here the condemnation is severe with daily protests and demands for his resignation.

As artist Jogen Chowdhury puts it: "For so long, we all thought Buddhadeb was a cultured, sensitive person. After Nandigram, and after we heard his defence of the police and his party cadre, we've been forced to change our opinion. We're shocked. Any sensitive person would have stepped down." Very clearly, it will take a lot of doing for Buddhadeb and the CPI(M) to recover lost ground in their bastion, West Bengal.