Health drinks have nourished Pepsi, pushed it ahead of Coke 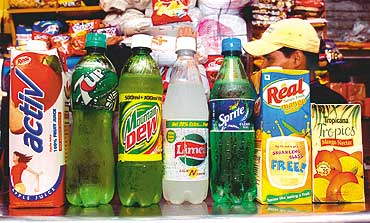 outlookindia.com
-0001-11-30T00:00:00+0553
In December 2005, for the first time in the intense, aggressive, unabated 108-year-old global cola rivalry, Pepsi overtook Coke in terms of marketshare, investor confidence and financial performance. The next month, Fortune, which in October 1996 had ridiculed Pepsi with a cover titled How Coke is Kicking Pepsi's Can, was forced to eat (or rather drink) its own words. In a sort of an apology, the magazine wrote, "Since our cover ran, Pepsi's operating margins have climbed.... Profits, effectively flat during the late 1990s, have climbed more than 100 per cent...."

The reason for this turnaround, say global experts, is because Pepsi was the first to realise that consumers would move away from fizzy colas to non-carbonated products because of health and other factors. It recognised that sales would stagnate in the former category and there was a distinct possibility of exciting growth in the health drinks segment. So, over the past few years, it introduced new products and captured marketshares in new segments. And the New York-based Pepsi raced ahead and forced the hitherto conservative and Atlanta-based Coke to follow suit. Globally, the writing on the wall is clear: the traditional rules in the ongoing cola wars have been rewritten—totally.

In India too, both Coke and Pepsi are quickly gravitating towards diversified portfolios. "We're looking at offering a total beverages solution...which would include not only carbonated drinks but also juices and health-based products," reveals Atul Singh, who heads Coca Cola India. Echoes Punita Lal, executive director (marketing), Pepsico India, who sees a huge opportunity in the health drinks segment: "Pepsi has an advantaged portfolio of non-carbonated beverages and a pipeline of innovative products."

In the coming summers, get ready for a slew of new products. After having introduced the Tropicana range of fruit drinks, Pepsi plans to activate it along with Slice, which will be introduced in a new 1.2 litre pack. It may think of bringing sports drinks like Gatorade, which has an 80 per cent share of the US market, to India. In addition, it's not difficult to imagine that Pepsi can even think of bringing in other global brands that include twister sodas, Diet Pepsi Lime and chocolate milk chillers.

Meanwhile, Coke hopes to launch Minute-Maid fortified drinks—one that lowers cholesterol and another that imparts calcium—in the Indian market. Having been criticised for not stacking its shelves with non-carbonated products, Coke will push investments in new health-positioned drinks, some of which may hit India soon. There can be a citrus-flavoured soda, a tea and a coffee drink using a new dispensing technology, a new juice drink containing plant sterols, and vitamin-enriched flavoured milk.

Three factors are forcing the cola giants to do this in India. The health drinks market is growing at a much faster 30 per cent a year compared to less than 8 per cent for carbonated ones. Just the fruit juice segment is worth Rs 1,800 crore. Agrees Sreepat Nadkarni, former VP (new beverages), Coca Cola India, "The non-carbonated category is growing extremely rapidly, especially due to the recent pesticide controversy (about carbonated drinks in '03) and the growing criticality of the health drinks segment."

In fact, in most of the non-carbonated segments, Pepsi and Coke are not the front-runners; even if they are, they are facing competition from a host of private players. For example, in the Rs 1,400-crore mineral water segment, Bisleri is the market leader and there are as many as 1,200 BIS-certified licencees. Dabur Foods' Real controls 57 per cent of the fruit juice segment, with Pepsi's Tropicana (27 per cent) far behind. In the fruit-based drinks category cola giants have a strong presence with Coke's Maaza as the leader followed by Parle's Frooti and Pepsi's Slice.

Couple this with the fact that both Coke and Pepsi haven't been doing too well in the Indian market despite being present here for over a decade. While Coke is just about breaking even, Pepsi is still incurring losses. Even the sales figures for the Rs 6,000-7,000 crore carbonated drinks aren't too encouraging. Coke closed its first quarter (ending March 31, 2006) this year with a 10 per cent decline in volumes (unit cases). This was the seventh consecutive quarter that witnessed a decline in volumes, largely due to the pesticide controversy.

Finally, like in the West, the Indian consumer is becoming health-conscious. Agrees Ramesh Chauhan, CMD, Parle-Bisleri, who sold his fizzy brands to Coke in 1993, "It's clear that health and naturally identifiable beverages work wonders in India. Products like Amul's chaas and lassi, which are available at less than Rs 10 a pack, are sold at terrific price points to target the average Indian." Predicts Raman Mangalorekar, head (consumer retail practice), AT Kearney, "They (the cola giants) have to innovate and reinvent themselves in order to survive in the business which has already changed—and will continue to do so—in favour of natural, organic and healthy foods."

Although Coke and Pepsi refused to comment on the changing consumer preferences and their respective corporate strategies, critics are quick to point out that the two MNCs are still getting it all wrong. Chauhan feels that their managements are still confused and the two firms are probably too late in diversifying into the non-cola segments. He adds that even the strategy of bringing in global brands (like Coke's Minute-Maid) is 'senseless' and 'a big gamble'. He thinks "it's also a colossal waste of existing assets as Coke has several Indian brands which it doesn't promote effectively".

Competitors also contend that successful non-alcoholic brands will have to cater to the Indian palate and taste preferences. For example, Dabur's CEO Amit Burman says companies have to launch drinks that have exclusive, closer-to-home and recognisable flavours like Real's litchi and guava drinks, or Active's cucumber and spinach ones. "This is an area where the foreign cola firms lag behind because their global portfolios of brands don't have them in the first place," he concludes.

So, is it time to write off the colas? Not really, asserts Mangalorekar. He draws an interesting parallel with the cigarette industry—"Cigarette sales continue to book huge profits even after a clear communication that they can cause death. So, the colas too will continue to be the mainstay of both Pepsi and Coke, but only if the companies continue to be seen as being socially responsible." But Nadkarni is a bit more optimistic about carbonated drinks: "They can't be written off quite so easily as their taste, aspirational values and the attached glamour can never be replicated."

Moving Dots On The Map