Everyone's tiring of 'K'. Niche and news are devouring the entertainment pie. 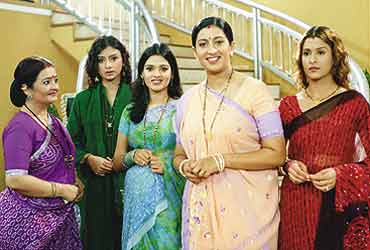 outlookindia.com
-0001-11-30T00:00:00+0553
Something unusual is happening on the telly these days. Small-screen daughters-in-law are facing stiff competition from newshounds. No wonder Smriti Irani, Tulsi on TV, is creating more waves on news channels as BJP rebel than as bahu in the once universally popular Star Plus soap Kyunki Saas Bhi Kabhi Bahu Thi.

Some call it a blip, others see it as a correction while still others believe it's a sign of a maturing TV industry. Says L.V. Krishnan, CEO, TAM Media Research, "While the overall viewership pie is growing annually at 6-10 per cent, mass entertainment channels have not been able to keep pace or even maintain shares." This is largely because they have failed to move beyond the saas-bahu formula. One channel that did try to innovate, Sony Entertainment Television, with its once-refreshing Jassi Jaisi Koi Nahin and now its popular talent hunt show Indian Idol, has seen a marginal increase in share. Says Tarun Katial, executive vice president, programming and response, Sony, "We have to expand the category by providing consumers alternate programming which is still mass in nature, otherwise we will de-grow."

Market leader Star Plus has tried to provide different fare by launching Star One. A channel that, according to Star CEO Peter Mukerjea, is like a Star World in Hindi and is targeted at the "Dil Chahta Hai crowd" which is definitely not interested in following the games of one-upmanship played out by saases and bahus every night on prime time.

Besides alienating the hip urban youth, these channels have also paled in the contest with other kinds of entertainment like lounge bars, theme parks and multiplexes. "Today there are alternate entertainment platforms that are taking away audiences from mass entertainment channels," says Siddharth Dasgupta, head of industry body FICCI's entertainment division. 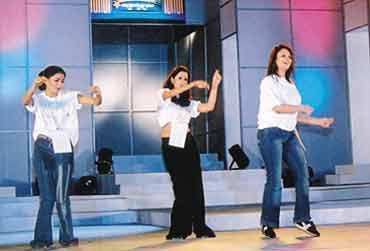 Media columnist Shailaja Bajpai feels that the writing on the wall for entertainment channels has been there for a year now. "They have got a wake-up call, they need to reinvent themselves and broadbase their programming. The viewer today has greater variety to choose from and is gradually moving away from the K-serials, especially in the metros." And even though more TV households are being added in the smaller towns, the metros still account for a majority of the viewership.

But if mass entertainment is fast losing its sheen, who is cashing in? News channels are one big gainer; so are other niche channels like kids, sports and Hindi movies. News as a genre has grown by over 4 per cent in the last two years. "Even if each genre grows by just a percentage or two, it all adds up to eat into the mass entertainment pie," explains Bajpai. And today thanks to the upgradation of TV sets, viewers receive a host of new channels. "The time spent on TV has grown and this has been taken away by the niche channels. Mass channels were always available, there is no novelty factor there," says Krishnan. And as the market matures further we will see greater segmentation and consumers can even look forward to a whole channel on fishing, gardening or even a dedicated funeral channel!

Though events like the Cricket World Cup in 2003 and the general elections this year did cause viewers to migrate to sports and news channels, media analysts don't think these events alone are responsible for the drop in the share of entertainment channels. While cricket is a seasonal thing, news is here to stay.News channels borrow successfully from other genres like sports and films and so TV news today, feel many, is more entertaining than entertainment channels. The popularity of the news channels is also evident from the fact that advertisers are putting their money behind them. If last year news channels got Rs 500 crore worth of advertising, this year the figure is expected to touch Rs 700 crore. This has led news channels to increase their advertising time from 7-8 minutes per hour to 12-14 minutes per hour.

Says Gopinath Menon, vice president, media, TBWA India, "Today there is no differentiator between Sony, Zee and Star. And news instead is becoming more of entertainment. The Shankaracharya and Ambani stories are like soaps playing on news channels. The viewer knows he can expect a new twist every day." He adds that today the young are also watching news on TV because there is a craving to be seen as well-informed and intelligent. Even the man-woman ratio that was 80:20 in favour of men has narrowed down to 60:40 with more women now watching news channels. "This is a great plus for advertisers who are targeting youth and women," says Menon.

Though worried by this drop in viewership, mass entertainment channels argue they are still the big daddies of TV. "Audiences are not running away from mass entertainment. This was just a temporary blip, we are making a comeback," asserts Ajay Vidyasagar, senior vice-president, marketing, Star India.

If mass entertainment channels want to lift the ennui, they have some serious reinvention to do. And the potential is enormous. For, 65 per cent of TV-owning households in India don't switch on their TV sets daily! A massive market waiting to be tapped.

In the US, while the popularity of drama serials is ebbing and large networks like nbc and abc are seeing a drop in ratings, reality shows, even after six years, are holding on. They're almost always among the top five TV shows. We too have begun our romance with reality shows, that too with some degree of success. The future does lie there, but only just. Indian television is still waiting for its next big idea post-KBC and the K-serials.