Exquisite murals wrapped a school in a corner of Bihar. Its colours have since spread. 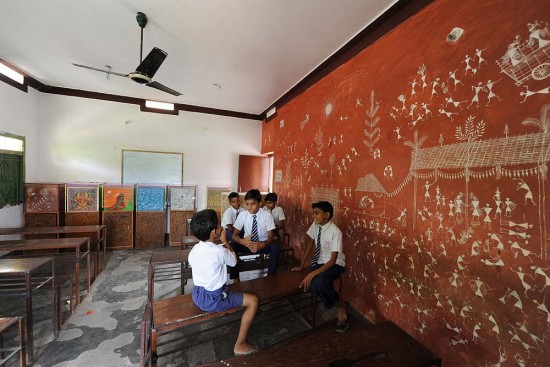 It’s a tiny school in the remote village of Sujata—named after the queen who fed Gautam Buddha milk and rice before he achieved nirvana in Bihar’s Bodhgaya district. Niranjana Public Welfare School for underprivileged children would in most reckonings have been one of the thousands of nondescript dots that populate the countryside. Except for a mini cultural movement taking shape within, and on, its walls, one which promises to sweep the whole country. It had a serendipitous start.

In 2010, a group of Japanese artists on a pilgrimage to the holiest site of Buddhism chanced upon the school building, surrounded by what they felt were the “amazing natural colours of rural India”, and decided to initiate a ‘wall art project’ there. “They were struck by the golden-brown hues that emanated from the cow-dung-plastered walls of villagers’ huts near the school, for instance, or the pristine white of rice-powder-patterns that women painted on the floors,” explains school director Devendra Pathak. “They wanted to experiment with these colours and went straight ahead.” Pathak points out that he and the other co-founders of the school—started as a non-profit tutorial for orphans and other poor children and run entirely on donations—were “only too happy” to let its premises be used for the project. “They seemed really serious and focused and we knew it could only be a good thing,” he says.