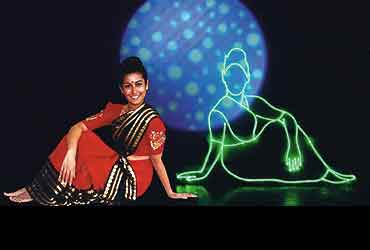 outlookindia.com
-0001-11-30T00:00:00+0553
With the late, celebrated magician P.C. Sorcar Sr for a father, wizardry runs in Manick Sorcar's blood. But unlike his father or famous brother P.C. Sorcar Jr, he doesn't swirl magic wands. Instead, his claim to fame is 'real imagery'. Teeming with everything from computer technologies, laser animation and intelligent lighting to live performances and, of course, magic, his bag of tricks has spawned successful stage shows and award-winning animation films showcasing Indian fables, art and culture. "Our tools are different," he says of his brother, "but the thrill is the same."

As also the magic. Manick is among a handful of entertainers pushing the envelope of thematic laser animation. His current passion revolves around a concoction of live action with life-size, laser-animated characters using his own proprietary technique, 'Sorcarscope'. As he readies for the October premier of his next production, Enlightenment of the Buddha, Manick explains that his technique, feted by the International Laser Display Association last year, uses a growing clutch of lasers, intelligent lighting (light fixtures with robotic dexterity), black lights (ultraviolet or infrared radiation that causes fluorescent materials to emit light), and light-emitting diodes (semiconductor diodes that convert applied voltage to light), all orchestrated by complex computer programmes. "We manipulate the laser beam as a paintbrush to create animated actions interwoven with live action and ballet," he says.

In doing so, Sorcar treads beyond conventional laser effects like beams, fans and tunnels to produce complex animated figures that can even interact with live performers. No less challenging, he adds, is directing actors to perform with intangible light beams. Denver-based Sorcar, an electrical engineer, is a rare amalgam of science and art. By day, as the chief of a lighting design firm that illumines high-end buildings, he's into stringent electrical codes and demanding customers. At night, he metamorphoses into a one-man creative enterprise, producing cartoons, animation, music and laser sequences at his home's basement studio. "It's like a hugely different Jekyll-and-Hyde scenario where I need Hyde at night to get me going as Jekyll during the day," says the veteran of a dozen animation films and as many global awards.

For someone who began by doing backdrops and lighting for his father's sell-out shows, the physics of lighting and electrical engineering took awhile in finding favour. But things became easier when he saw "the art in science and the science in art". Which is why "the use of light as a paintbrush" comes easy to this author of three university textbooks on illumination engineering. Calcutta Forever, Sorcar's maiden 8-minute Millennium Day laser animation, is still vividly remembered by the City of Joy. "It was extended to 14 performances on popular demand," he says with a smile.

What galvanised the animator in Sorcar in the 1980s was the need to keep his US-born daughters moored to India. He began by writing Bengali songs and then creating animation for it. After painstakingly hand-painting hundreds of animation frames, he got his daughters to sing and enact the songs while using the blue-room, Chroma-key technology at local studios to shoot and meld animation and live action. In the three years this took, he was down to his last penny. But the outcome, Deepa and Rupa: A Fairy Tale from India, beat Children's Workshop's Sesame Street and Hanna-Barbara's The Greatest Adventure at the New York Film Festival. Manick knew then he was on the right track.

Sorcar's films are serious, high-starred and educational and a staple of children's TV in America. The popularity can be gauged from the lengthy Q&A sessions that follow screenings at schools and libraries. Curious audiences have even urged his wife to demonstrate how the sari is draped. His films are also the subject of a bachelor's research project at Georgia's Savannah College of Art and Design. Even today, it isn't unusual for Sorcar to scribble endlessly on napkins at parties. "Ideas generate all the time," he says. "If you can make an elephant vanish by magic, it doesn't take much to make a car do so. One success opens up other possibilities."