Broom With A View Along Five Rivers 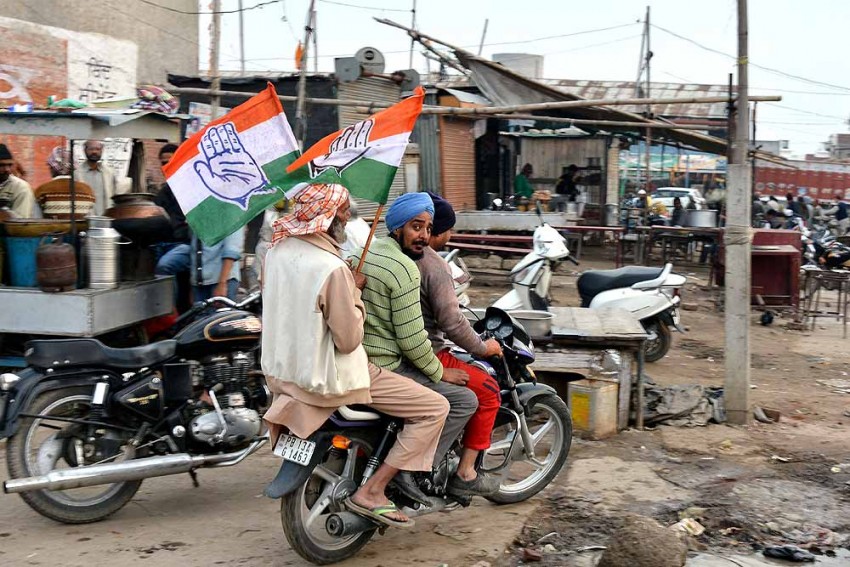 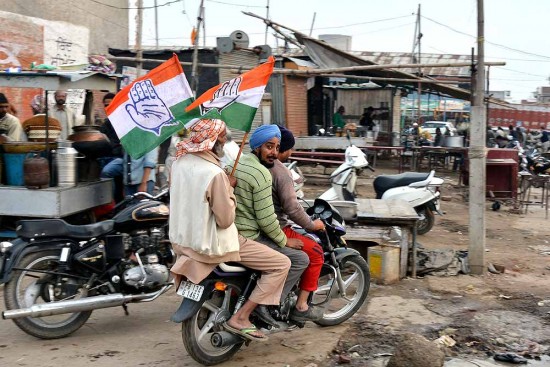 The massive crowd is perfec­tly still, rapt in attention. Bha­gwant Mann, Aam Aadmi ­Party’s Member of Parliament from Sangrur, is on stage. He is AAP’s most heavyweight campaigner for the Punjab ­assembly election, due on February 4. His ‘kikli’, or ditties, are a massive hit at rallies. When Mann sings, people in the audience turn on their mobile phone torches, making scores of pale lights glow in the twilight.

Those gathered for Mann in this Jalalabad rally have heard his kikli bef­ore. So many times, in fact, that they rem­ember it. “Kikli? (This song?)” Mann booms into his microphone and the audience shouts back, “Kalir di (It’s about a girl).” “Gaap? (Lies?)” Mann croons and the crowd responds, “Sukhbir di (They come from Sukhbir Badal).” “Smack?” he asks and they respond: “Order it from the border.”

The audience grasps Mann’s message, which is about holding Shiromani Akali Dal (SAD) leader Bikramjit Majithia res­ponsible for the state’s drug problem. Freeing Punjab of drugs is not just a key promise of his party, it is, quite literally, AAP’s rallying cry. Around this, it has built up a state-wide campaign to directly target top leaders of the SAD on all issues, from corruption to governance.

Among the AAP rank and file, there is a strong belief that a large section of voters who are keeping their cards close to the chest have already ­chosen the jhadoo.

At Majitha, half an hour from Amritsar by road, the impact of this strategy is apparent. This seat is held by Bikramjit, who is also deputy CM Sukhbir Singh Badal’s brother-in-law. “Jhandi Akali ni, vote Lalli ni (I will let the Akali banner flutter on my roof, but my vote is for Lalli),” says spare parts dealer Harpreet Singh, expressing a common sentiment in this region. Weariness has set in after 10 years under SAD rule and Harpreet, who once voted for Bikramjit, has now turned to Congress candidate SRS Lalli.

Others in Majitha are gravitating to Himmat Singh Shergill, the AAP candidate. Yet, it is the SAD pennant—scales set against a saffron background—that flutters on practically every rooftop. “Badal’s men” have put them up, residents say, so they dare not remove them. “The banner, however, doesn’t indicate whom we will vote for,” says Gurcharan Singh, a local merchant.

A pepper-bearded and moustachioed Lalli, a political powerhouse who is energetically taking on a still-youthful Bikramjit and the ‘newcomer’ from AAP, says, “I assure you, they will vote for the Congress. Shergill will not be able to make a dent here. I will win Majitha and this constituency will also have the highest polling percentage in Punjab.” 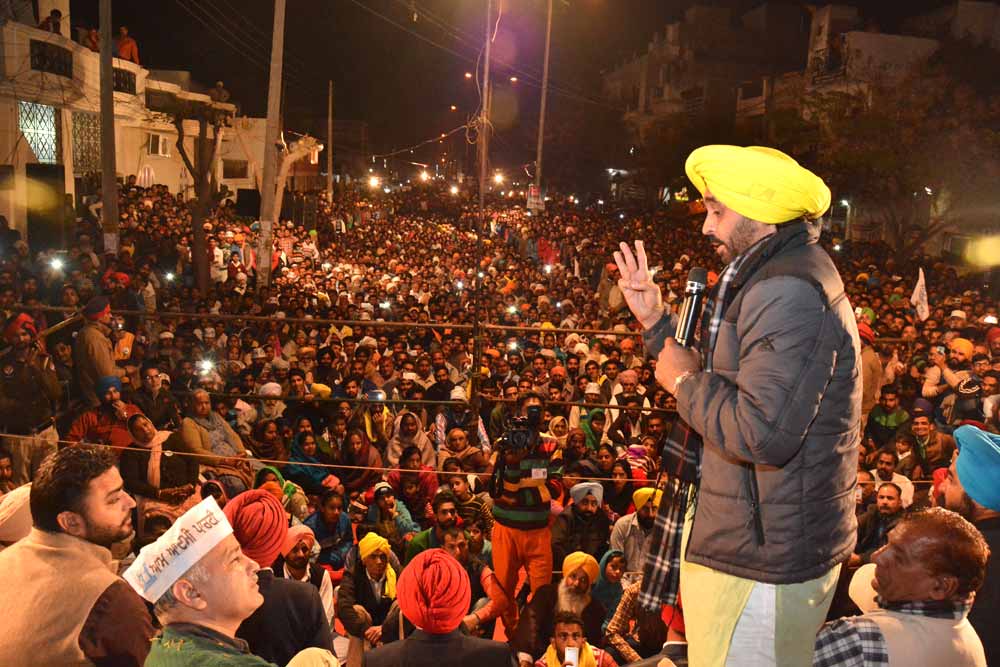 Congress leaders, Lalli tells Outlook, are “entrenched” in Punjab’s system and hence more suited to take over from the flailing SAD. He dismisses Delhi CM and AAP national convener Arvind Kejriwal as an “outsider”. As for the SAD flag fluttering all over Majithia, he chimes in cheerily, “Jhandi Akali ni, vote Congress ni.”

The charge of being “outsiders” in Punjab is one that repeatedly comes the way of AAP’s top leadership, including Kejriwal. “If AAP is an ‘outsider’ then what is Rahul Gandhi? An insider? And Sonia Gandhi? Are not AAP’s contestants and leaders from here? This charge make no sense,” says Kejriwal, who has been camping in Majitha and Amritsar as the party does last-minute push-ups for the Majha and Doaba voters. Like Lalli, Kejriwal too believes Majitha might indeed slip from Bikramjit’s hands, but he hopes it would fall for Shergill’s ardent embrace instead of the Congress’s waiting handshake.

Outside a dusty, old godown in Majitha, while Akali-branded vehicles bustle to and fro, their loudspeakers blaring, stands Manjeet Singh, a white-bearded Sikh well into his 60s. It is men and women like him, who usually voted Akali but are now shifting allegiance, that the Congress and AAP are vying for, everywhere in Punjab. “Pakoda Akali ka, chai Congress ki, vote jhadoo ka (Eat Akali snacks, drink Congress tea, vote AAP),” he says. The reason Manjeet cites for wanting to move away from the SAD—the “be-adabi” or desecration of the Sikh holy book, the Guru Granth Sahib, by unknown miscreants in different parts of the state—are not unusual either. The Sikhs have expressed outrage not just in the Majha region, but also in Patiala and Sangrur in the Malwa, Jalalabad of Fazilka district and Zira in Ferozepur district.

“The Badals punished nobody for rep­eated sacrilegious acts on the Granth Sahib. They did nothing. Moreover, they are money-minded. Parking fees are now levied even at the Harmandir Sahib (Golden Temple, Amritsar). This is unacceptable,” says Manjeet. “We voted Congress or SAD for 70 years. Now there is someone new here.” 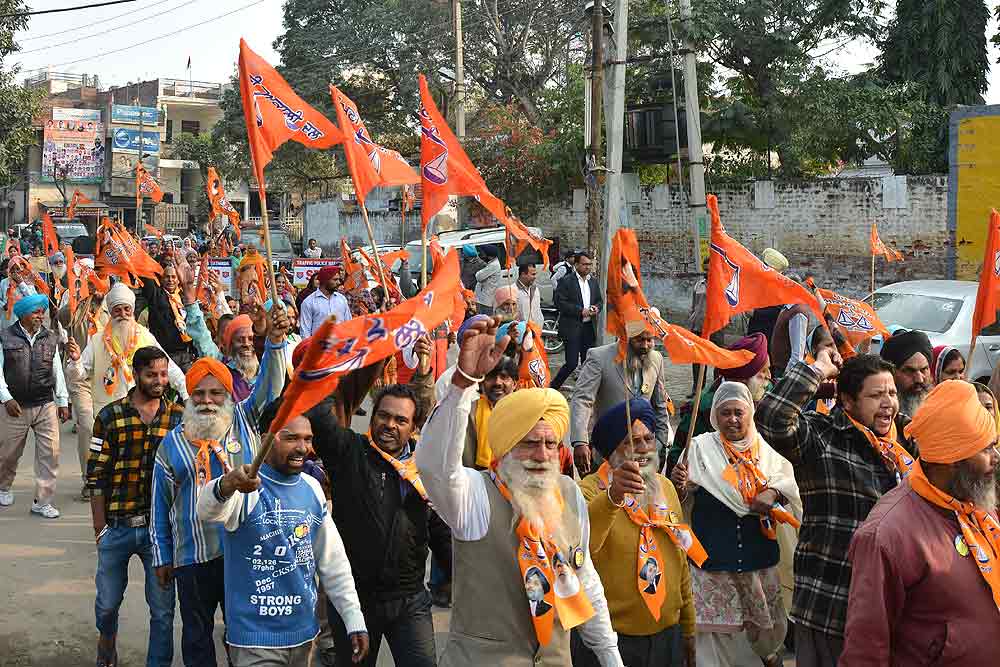 Just about a mile to the east of Majitha is another twist to the Punjab election tale. At the tiny settlement of Idgah, the rage of the 350-odd voters is directed against political outfits of all shades for their neglect of civic facilities, education and healthcare. “Hamara vote gupt hai (our vote is a secret),” say a group of residents. “You will find out only on March 11 when results are declared.” Among the AAP rank and file, there is a strong belief that all such voters, who are keeping their intentions under wraps, have already chosen the jhadoo, or broom.

If Majitha is in ferment, Amritsar is in a flap. Every street corner has, it seems, people supporting a different party—the AAP has votaries among traders in the walled city and many from the middle classes. On the whole, it is the Congress that gets talked about more. This apparently has less to do with the party’s high-profile candidate, former cricketer Navjot Singh Sidhu, than with the fact of the Congress being “entrenched” in the state’s system, as Lalli put it, offering a known alternative to those with strong anti-Badal sentiments.

“I will vote as the pradhan of my colony wants,” says Bhagwati, a middle-aged tea seller whose stall is outside a shopping mall. “If we do as he says, he will at least give us food to fill our bellies for five full days.” She is a typical Amritsari voter, who will swing wherever her ‘network’ swings. In her case, the pradhan has been leaning on ‘Panja’ (hand), the Congress’s election symbol, so far.

Bhagwati lost Rs 3,000 in the aftermath of demonetisation—a solid blow that has left her seething against the BJP and their ally, SAD. The majority of traders share this sentiment. Many feel this is reason enough to deny the vote to the old established parties—the BJP, the Congress and the Akali Dal—making AAP the natural choice.

This is what makes the average AAP volunteer believe that this election in Punjab is not a “normal” one and hope this would be an election for voters to seek a total break from their past choices. While AAP hopes this shift becomes widespread, the Congress is consolidating voters around its most popular leadership, often in urban and semi-rural constituencies.

“Jhadoo ka zor hai yahan (Here, AAP is a force to reckon with),” says Kuldeep Kaur, a resident of Chuchak village near Zira town in Firozpur district, south of Amritsar. She, too, cites the Granth’s desecration as a key grouse, but others here have more ­complaints. “Badal did only one job—drugs,” says Gursekh Singh, a farm worker. Harjinder, a ­carpenter, says, “The fight here is bet­ween Congress and the jhadoo.” Echoing the words of a senior state police CID officer, who said there were reports of “silent support” for AAP in the villages, Bohra Shah, another resident, says, “This time the mahaul (buzz) is more around Kejriwal. Politicians fool us every time. This time, we will fool them.”  Here, too, people insist the brand new SAD and Congress pennants flapping all over their homes are no indication of where their sympathies lie.

“We can’t refuse any leader, so we end up attending every party’s rallies. It means nothing. Since they started tearing down or blackening Kejriwal-jhadoo posters, we have stopped displaying them,” says Manjeet Kaur, from one of the better-off landowning households. In Punjab’s scheme of things, the coming together of the poor and rich sections of villagers in Chuchak and elsewhere indicates a possible Dalit-OBC combine taking shape.

Deeper south, still in the Majha belt, lies sleepy Jalalabad within the Fazilka assembly segment, now transformed into a nerve centre for Punjab politics, as the seat is held by Sukhbir Badal. He is being challenged by AAP’s Bhagwant Mann and another MP, Ravneet Singh Bittu of the Congress. The dominant Rai Sikhs here are watching the pre-election hubbub with wry, slightly anxious indulgence. “Oh we don’t know if jhadoo will win,” says Jagneet Singh, who runs a medical store, though he readily admits there is “more anger against the Badals” here.

At many places across Punjab, people insist that the SAD and Congress pennants flapping all over their homes are no ­indication of where their sympathies lie.

Bittu has teamed up with disgruntled SAD MP Sher Singh Gubaya. The apparent reason is the release of ‘sex tapes’ implicating Gubaya, also a Rai Sikh. This turned him and other Rais against the Badals. So he backs Bittu for these polls. “Pata nahin, jhadoo na chal jaye (I can’t be sure, but the broom might sweep us up),” says Ravneet Kaur, a housewife who attended an AAP rally led by Delhi deputy CM Manish Sisodia in Jalalabad.

Further east, in Patiala, the Malwa reg­ion’s eastern district, and in the urban areas of Sangrur, the Congress and AAP are snapping at each other’s heels. “I always voted Akali, but now I am with AAP. I got tired of the Akalis treating us as a vote-bank,” says Manjit Singh, a small shopkeeper at Patiala’s Paranda Bazaar. Overwhelmingly, all but the older generation of Badal-Akali supporters say they want to signal their disenchantment by voting “for something different”. “People didn’t have a choice before—it was either Badal or the Congress. Today, there is a new option and it wears a stamp of honesty on its forehead,” says Jaspreet, a chemist in Galbatti, a Patiala village.

The situation all parties want to avoid is a three-cornered contest, but in Majha and Malwa, where lie 90-odd of Punjab’s 117 seats, this is exactly what seems likely in urban areas. “Sikh families often vote for the Akalis out of sheer loyalty,” says Prabhdeep, a panchayat member of Bagrian in Sangru. “That is why, even though AAP was poised to win some time ago, now things are not that clear. Everyone is in the race.” There is, however, still that matter of a silent vote—who knows, on election day, who will they shout out for.