The 'greater TN' outfit is hitched up with the brigand 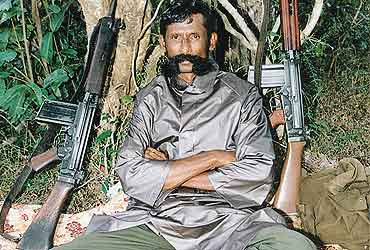 outlookindia.com
-0001-11-30T00:00:00+0553
The Tamil Nadu Liberation Army (TNLA) and the Tamil Nadu Retrieval Troops (TNRT) were among the 32 organisations banned under pota on July 16, 2002. The TNLA was founded in the mid-’80s by Tamilarasan, an engineering college dropout, who initially took up the cause of landless peasants in Tiruchi and south Arcot districts. But once he came in contact with Nagarajan, an expelled ltte hand, the goal became "the liberation of the Tamil country from the Indian Union".

The TNLA’s ‘research division’ envisages a Vishala Tamil Nadu, which borrows from the erstwhile Madras Presidency map extending from Ganjam in Orissa to parts of southern AP (Rayalaseema), parts of Karnataka (the Mysore-Mangalore region), the whole of Kerala, and from the international map the entire Eelam area of Sri Lanka, the whole of Maldives, Malayanadu (Malaysia-Singapore), Lakshadweep and Mauritius.

But that’s only on paper. In reality, all that the TNLA’s managed, with a meagre following of unemployed, disenchanted youth, is to blast rail tracks and rob banks. It effected a derailment of the Rock Fort Express on March 15, ’86, killing 25 passengers. TNLA also attempted to blast a bridge on the Coleroon river, near Tiruvaiyaru, the same year, on the eve of then PM Rajiv Gandhi’s visit. Tamilarasan was apparently stoned to death by a mob on September 1, ’87, after he robbed the State Bank of India branch. Soon, factionalism set in and the TNLA split. After Tamilarasan’s murder, one Lenin took over, pioneering attacks on police stations to loot arms. The other factions were led by Ilavarasan and Koovagam Ramasamy.

The Tamil Nadu Retrieval Troops was formed in ’91. Another group, led by Maran alias Senguttuvan, joined forest brigand Veerappan and hitched him to the Tamil-nationalist cause. One of the demands made by the brigand after he abducted Kannada actor Rajkumar was the release of five TNLA cadre from TN jails.

In 2001, the TNLA had issued an e-mail assassination threat to Tamil Nadu CM J. Jayalalitha. In June 2003, its plan to blow up railway tracks in Perambalur was foiled. Last month, TNLA leader Suba Ilavarasan was reportedly apprehended. In retaliation, the TNLA on October 1 threatened to blow up the Vaigai Express and Rock Fort Express unless the police released Ilavarasan.