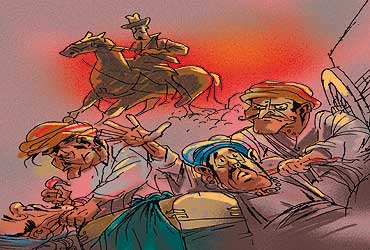 Thug—The True Story Of India
By Mike Dash
Granta Books Pages: 381; Rs 895
One of the incidental outcomes of the political furore over the beliefs of Mohammed Ali Jinnah is the revelation that India finds revisionist history disconcerting. Thanks to decades of mindless over-politicisation, Indian history tends to be written as a morality play. Medieval history is, of course, the worst sufferer but the perversion extends to the scrutiny of British rule as well. It has become drearily fashionable to view the entire colonial experience through the prism of modern-day political correctness.

A casualty of this warped thinking is the writing of history. Till the 1950s, India had a vibrant tradition of historiography that combined empirical rigour with compelling prose. The narrative tradition may seem dreadfully old-fashioned today but it captured the romance of history and made it appealing to general readers. The tradition of history-writing India inherited from the British was infinitely superior in every respect to the turgid, Marxist, post-modernist drivel being produced from today’s "detoxified" institutions.

Fortunately, there are no national barriers to the writing of history. The exhaustive archives of the East India Company and the Government of (British) India documents in Britain have ensured a steady trickle of books on Indian history that don’t suffer from the infirmities of Indian academe. In the past decade, popular writers like Patrick French, David Gilmour, Ram Guha and William Dalrymple, and historians such as Chris Bayly and Niall Ferguson, have significantly enhanced the popular understanding of facets of India’s colonial experience.

Mike Dash’s recreation of the story of thuggee and its suppression in the 1830s by a determined band of East India Company officers led by Colonel William Sleeman follows the glorious tradition of solid, empirical, narrative history. It is a book that may offend the post-colonial fundamentalists for its insistence on spelling Indian names in the archaic 19th-century way—it’s always Jubbulpore and Nerbudda, not Jabalpur and Narmada—and for its over-reliance on court proceedings and the documents of the Thuggee Department (in any case, there are no other sources). But these are niggling issues. At the end of the day, Dash has produced a history that is stylistically riveting, thorough in detail and rich in analysis. What is more, this is a book that is not aimed at specialists alone.

There are some crucial aspects of 18th century India, more particularly the Bundelkhand, Vidarbha and Awadh regions, which emerge from this story of India’s most notorious gangs of killers. First, the decline of the Mughal and the Maratha empires left India in a state of utter lawlessness. A combination of economic stagnation, demobilisation of the great armies and the absence of a strong political authority created conditions for thug gangs to claim an average of some 500 well-heeled victims a year for over a century.

Second, the phenomenon of thuggee was more than a multitude of standalone gangs. By the 1820s, it had evolved into elaborate networks of groups, each led by a jemadar and comprising anything from a dozen to 50 thugs, who went on expeditions during the winter months. Thuggery was always seasonal and during the rest of the year, the thugs worked as farmers and sepoys. Moreover, there were no permanent gangs and individual thugs, depending on their specialisation, could attach themselves to different jemadars.

Third, by the 19th century, thuggee had evolved into something like a craftsman’s guild. It had its specialisations, ranging from the stranglers, the grave-diggers, the inveiglers to the apprentices. The profession had even assumed a hereditary character, and there were elaborate codes of conduct, religious rituals that governed Hindu and Muslim thugs alike and superstitions surrounding the grisly business. Booty distribution too followed an egalitarian principle. The thugs were also subject to an unofficial tax by the local rajahs and zamindars for the privilege of operating in their territory.

Finally, although the suppression of the thug gangs by Sleeman involved the use of terror, victory was achieved through the careful use of intelligence. Sleeman used the information supplied by captured thugs to create a formidable data bank on all aspects of thuggery. His anti-thuggee campaign was, perhaps, an early example of a concerted operation against organised crime. Sleeman anticipated many of modern policing techniques. The evidence his department collected to secure conviction of captured thugs is enviable even by modern standards.

Sleeman epitomised the enlightened dimension of the colonial encounter. The British prevailed in India because officers like Sleeman understood the importance of organised knowledge as a complement to military might. ‘Thuggee’ Sleeman was one of British India’s genuine heroes.