Bring Out The Heavy Machinery

CEO Modi will be on the job from day one, say team members. A look at his possible pet projects 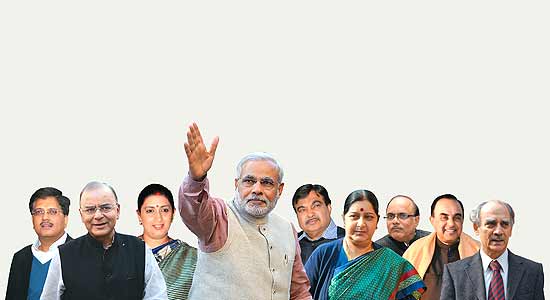 For a man who’s been asking the electorate for the past 18 months to change the fate of the country, Narendra Damodardas Modi has a plan up his sleeve. Insiders confirm that Modi already has a team in place to look at priority areas. Members of the team working on the development plan say, “Modi will work like a project manager who has a deadline to meet. Work for the 60 months of development that he is looking at will begin on day one. There is no time to waste.”

So CEO Modi has laid down five flagship projects as top priority. These would include economic, social and political projects. A team member told Outlook, “Top on Modi’s mind is providing a huge impetus to manufacturers. He wants business to grow because he is convinced the economy will grow if business is allowed to thrive.” It is with this in mind that a complete revamp in the sectors of road, railways, freight transport and ports is being plan­ned. Immediate action would be seen on the Delhi-Mumbai and Delhi-Calcutta corridors. Modi’s emphasis, sources say, will be to shift freight transport from railways to road and to reduce oil import.

Modi’s team confirms that attention will be paid to the revamp of ports, in fact a complete facelift is being planned. Team Modi is looking at possibilities of opening newer ports and competence delivery will be top focus. Modi, sources say, is also keen on turning around the coal, steel and power sectors with focus “first on solving the current mess in the coal sector and then working towards providing quality power generation”. Special attention will be paid to the Northeast.

On the social projects front, the Ganga will remain Modi’s pet project once he takes charge of the government as prime minister. Sources concede that the Ganga project has political significance for Modi which is why Team Modi has been told to have a special plan in place revolving around the river. A team member says, “Electoral dividends for Modi came from the Ganga belt of Uttar Pradesh and Bihar. Both the BJP and Modi know that if we want to keep that goodwill coming our way from that region intact, then something concrete needs to be done for that region.”

“Electoral dividends come from the Ganga belt of UP, Bihar. Something concrete is needed to keep it coming.”

No doubt, politically, the Gangetic belt is an important region for the BJP and particularly Modi, considering many party MPs come from that area. As a result, Modi has asked his team to have a three-pronged approach towards the Ganga project. In the pipeline is a massive clean-up programme for the Ganga, followed by a flood control management scheme. That done, Modi wants to put in place a water tourism economy plan around the Ganga that would help generate not just employment but even transport opportunities through the river. “We will also ensure that the river generates an economy around itself, which is why water transport for goods and water tourism on the Ganga will be emphasised upon,” a source revealed.

Sources let on that Modi has also directed his team to come up with skill development programmes for both women and youth, two sections that Modi had been rallying for and seeking support from throughout his election campaign. Skill development programmes will look at providing training in the fields of vocational, technical, rural services and even the small manufacturing sector.

Those close to Modi confirm that he would be looking at the next five years also as a time to consolidate his position politically. On the agenda therefore is an expansion plan for his party. A source says, “Contrary to popular belief, there will be no witch-hunting of opp­onents. There is a sound legal system in the country and therefore there is no need for anyone to hound an opponent, especially when Modi wants to ensure that his opponents become irrelevant...occupy little mindspace with an electorate hungry for development.”

Modi would therefore be working hard on increasing the imprint of his party in states like Tamil Nadu, Kerala, Orissa, West Bengal and Assam. A source explains, “In future elections, we don’t want to be dependent solely on the Hindi heartland for an election victory. These states then become very important bases for us and Modi is clear he wants a massive geographical expansion to ensure that.” Emphasis therefore will be laid on strengthening the BJP and its cadre and building the party separately in states where it falls short of an impressive presence. It is with this in mind that Modi is likely to pull in a lot of district-level leaders with defined participatory roles in his government.

Not just that, sources also say that Uttar Pradesh and Bihar feature big in Modi’s act­ion plan. A source says, “Politically, str­ong regional leaders outside of the BJP don’t represent an ideal situation for us. We will therefore attempt to have BJP governments even in these states in the near future.” And to achieve this, Modi’s mantra in this new stint will be to provide “bijli, sadak, paani to every household in every village”, as his aides put it. Clearly, Modi’s ambition is not a five-year run but an aspiration beyond just one term of prime ministership.