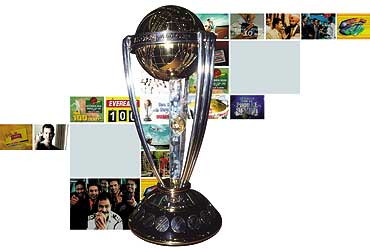 outlookindia.com
-0001-11-30T00:00:00+0553
There is complete mayhem out there. Much before the first bouncer is bowled on those lively South African pitches, Indian advertisers are bracing for a desperate run chase to get on to the World Cup cricket bandwagon. Everyone wants a slice of the pie Sony Entertainment Television's Max channel is dishing out. "If you are not talking cricket, you ain't talking," says a media planner, under pressure from his clients to buy at least a few seconds of airtime on MAX.

The hype is killing. No media planner can afford to ignore it and companies are upping their budgets by more than 25 per cent for the 45-day-long mega tournament. According to industry estimates, consumer durable majors LG and Samsung may together spend over Rs 50 crore on World Cup advertising. In fact, a marketing consultant puts the total adspend at 10 per cent of the industry's annual budget (estimated at Rs 8,000 crore). A quick calculation and you arrive at a figure that boggles the mind.

Rohit Gupta, executive vice-president (network sales), Sony Entertainment Television, is a happy man and he confirms that the moolah is pouring in. "We have beaten our own estimates. We have sold nearly 50 per cent of our inventory and there is still more than a month-and-a-half to go before the event." To give an idea, Gupta has roped in two of the four global sponsors of the World Cup, Pepsi and Hero Honda, and is negotiating with the third, LG.

In addition, Sony is wooing other big advertisers. Hindustan Lever has bought sponsorship for two of its brands, and the channel hopes to tie up with a few others by the beginning of the next year. "We think a number of other sponsors will come from the automobile and telecom sectors," says an optimistic Gupta. Once these deals are signed, Gupta's job will be to merely sell another 40-50 spots to smaller advertisers and this, he says, will just take three or four days.

But just because it seems easy, don't think Sony is selling the Cup cheap. For example, you have to dish out Rs 8-10 crore to be an associate sponsor, almost double the amount sponsors paid during the previous World Cup. And if you are buying independent spots, the price is close to $8,000 (Rs 4,00,000) for 30 seconds of airtime. Normally, for any cricket series that involves India, the going rate is between $5,000 and $6,000, but advertisers are willing to pay more because they are betting on the fact that viewership will soar during the World Cup.

In this sporting battle, the mid-sized and smaller companies, who cannot afford to spend such huge amounts on Max, could get blocked out. The reason: Max is not selling spots for individual games and expects companies to buy slots on all the 54 matches. Says Ashutosh Khanna of Grey Worldwide: "You need at least Rs 5-6 crore to get any meaningful exposure during the World Cup." Therefore, mid-sized and smaller players with ad budgets anywhere between Rs 2 and Rs 10 crore are exploring other avenues.

From World Cup countdown programmes on other channels (cheaper by 25-30 per cent) to FM, print and outdoor, these advertisers are weighing all the available alternative options to hitch their wagons to. The print media, which is going to net just about 10 per cent of the total World Cup spend, is luring advertisers with tailor-made content.For example, a Kodak could sponsor the World Cup Picture of the Day and a Yamaha could be convinced to put its brand name behind Winners of the Day. Or, they could sponsor special World Cup supplements in newspapers and magazines.

Despite the hype machine working overtime, high costs as well as several ambush marketing clauses have put a dampener of sorts on the Cup excitement. Several potential advertisers fear that the event might just become the preserve of the sponsors alone. That's because the ambush clauses put serious restrictions on other advertisers. "The ambush business is messy. We somehow managed to get through the ICC tournament in Colombo, but things are not clear for the World Cup," admits Chintamani Rao, president, Universal McCann.

In the recent past, advertisers like Britannia, Philips and HPCL have faced legal action from the ICC because the latter feels that contests offering tickets to the World Cup violate the ambush codes. Obviously, the existing sponsors have pushed the ICC to initiate these moves. The sponsors argue that the only reason they have paid huge amounts is because they were promised safeguards against such ambush. "It's all a money game. If you are paying Rs 100 for something that cost Rs 10 earlier, you would look for safeguards," says Nitin Jain of Mindshare, a media buying house.

But those left out of the sponsorship loop contend that there's a lot of ambiguity regarding the ambush clauses. So, whatever they do can be interpreted either way. Not surprisingly, there are hardly any innovative promotions on air because nobody knows what might get them into trouble with the ICC. Says a piqued advertiser, fed up with all the complicated clauses: "Thank God they are allowing the Indian viewers to see the matches."

Another concern of the advertisers is the apprehension that they could be overestimating the impact of the World Cup. "It is a high-stakes game. There are too many ifs and buts. For example, if India does not reach the Super-Six round, interest in the tournament will die out," says Indranil Datta, general manager, Zenith Media. Add to it the fact that India hasn't been playing too well in its current series with New Zealand and that it is up against strong teams like Pakistan, Australia and England in its first round group.

"Advertisers are hedging their bets on India's performance since viewership can fall by 50 per cent if India fails," says Samsika's Kapoor. Therefore, a few of them are concentrating on gains in the run-up to the Cup, when the interest levels are buoyant. For instance, global sponsors like Pepsi and LG have already created massive hype around the event and are trying to squeeze as much mileage as they can even before the matches start. And if India does get to the Super-Six round, it'll be the perfect icing on their cake. Agrees Anita Nair, VP, media, Mudra Communications: "It's a gamble, but if India does well, the advertisers will get their money's worth. "

Well, even if India fares badly, the advertisers still hope to get their money's worth. For, Max may then be forced to cut its rates and even offer slots for individual matches. That's the time when mid-sized and smaller players will queue up to buy slots, for their share of the steal for the semi-finals and the finals. Of course, Indian cricket fans will hope this is a case of wishful thinking.

Results From The Lab