Bright Spots In The Woods 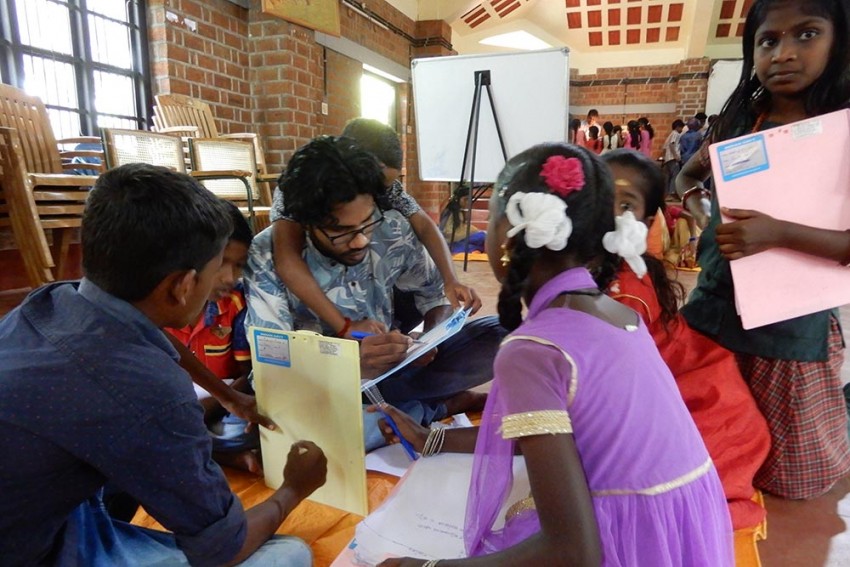 Togetherness
A maths class is on for Attappadi tribal children under Project Shine
Photograph by Minu Ittyipe
Minu Ittyipe November 09, 2017 00:00 IST Bright Spots In The Woods 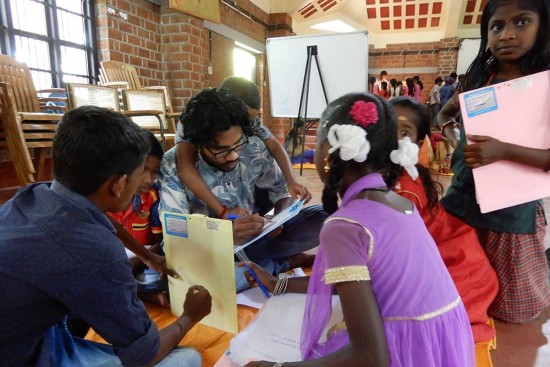 Elderly Manappe sits on the ver­andah of her home in Thekkupana hamlet, clutching a bag of beans that she has foraged in the wild terrain of her native Att­appadi tribal belt. She isn’t sure of her age. “I have no education,” she says with a resigned sigh, and gesticulates with her thumb to explain that she uses it for everything, including voting since her youth.

Times are anyway changing. Winds of learning are shaking up laidback Atta­ppadi, propelling the hilly stretch of eastern Palakkad to newer vistas. Not knowing one’s age will soon be a thing of the past. Behind Manappe’s home is a sign of it: there resides Kalliamma and Nagappan, who have three children. One of the kids, Rangappan, is 10 and attends the weekend class of Pro­ject Shine.

That is the name of a scheme training tribal chi­l­dren below the age of 12 to appear for a national-level entrance exams for admissions to Sainik and Jawa­har Navodaya Vidya­laya schools. Kalli­amma comes down from the forested hill, with a heavy bundle of firewood on her head, to greet the facilitators of Project Shine who are visiting the homes of their students. She helps out in the local anganwadi on the Western Ghats. “I get a monthly salary of Rs 3,000,” she reveals. “My two older sons are in the boarding. Rangappan is studying well.”

The other parents too applaud Project Shine. They hope it will lift their children from the age-old socio-educational mor­ass to a realm of knowledge and better life. The children’s aspirations see a huge leap: A jeep driver’s son is determined to be an army officer, while a labourer’s son aspires to be a doctor to tackle the health problems in Attappadi. Sivakami, a 10-year-old from Kooka­mpalayam, says her dream is to become a collector: “I can build houses for the poor.”

The children’s dreams were limited in June 2015 when the Centre for Advanced Research in Socio Emotional Learning (CARSEL) launched Project Shine. “They couldn’t think beyond becoming a driver or a teacher,” recalls Litty Mathew, co-fo­under of the Kochi-based organisation that strives to create emotionally literate and socially supportive communities.

Only 10% of the tribal children were initially equipped for Sainik School’s entrance test. The Mathews changed it all.

The seeds of the project were sown at Thiruvanathapuram, where Sainik Sch­ool’s 1991 batch was hosting an alumni meeting. Researcher Babu Mathew, a co-founder of CARSEL, attended it with his wife Litty, a data analyst. Someone in the group pushed the thought that it would be good to teach the tribal children of Atta­ppadi and help them get into Sainik School. Babu and Litty volunteered to give it a try. The Mathews reckoned it’d be simple: rent out a building, hire a couple of teachers and run a full-fledged tutorial with the alumni funding the project.

Thus began Babu and Litty’s many jou­rneys to Attappadi to find under-10 children to be groomed for the exam. The five trips bore no fruit. “No school, governm­ent or private, was interested in the children leaving their school to go off to a military school even if it meant welfare,” says Babu. This, despite the tribal area being ste­eped in multiple problems: malnutrition, infant dea­ths, joblessness, alcoholism.... Only in 2013 had 31 infants died in Attappadi. A massive gove­rnme­ntal int­ervention of Rs 125 crore saw the appointment of Dr Seema Bhaskar as the CEO of Nat­ional Rural Livelihood Mission. Topping the priority were food and nutrition and social development.

Even as various projects under the aegis of Kudumbashree were being rolled out full steam, then sub-collector P.B. Nooh felt it pertinent to lend the Mathews a hand when he heard about Project Shine. “Here was a couple who was confident that they could make a change in the children’s lives; I gave them permission to go to the hamlets, the government schools and speak to children and teachers,” he says. “The couple needed no financial assistance. They were committed to accomplish a tough mission. Though I was not part of Project Shine, I would often visit the children—and saw them transform.”

Finally the tenacious Mathews made a list of 24 children. To evaluate the standard of these class five students they were given a simple exam. Only some 10 per cent of the children looked somewhat equipped for the exam. The Mathews were dismayed. Nevertheless, the alumni deci­ded not to abandon Project Shine, noting the effort won’t be a waste and if it could help even one child. That was when the Mathews decided that they would make the seven-hour journey every weekend to coach the students themselves.

Lekhamol P.T., a 28-year-old guest teacher in Sholayur High School, heard about the project scouting for teachers. She joi­ned up. “We had only a few weekends before the entrance exam. Most children could not read a question paper. Our task was to make them grasp the mathematical concepts and help them make words out of letters,” says Lekhamol. “We also had to deal with their hygiene and emotional well-­being. We split them into eight subgroups, and designed activity-filled modules where each child would help the other.” 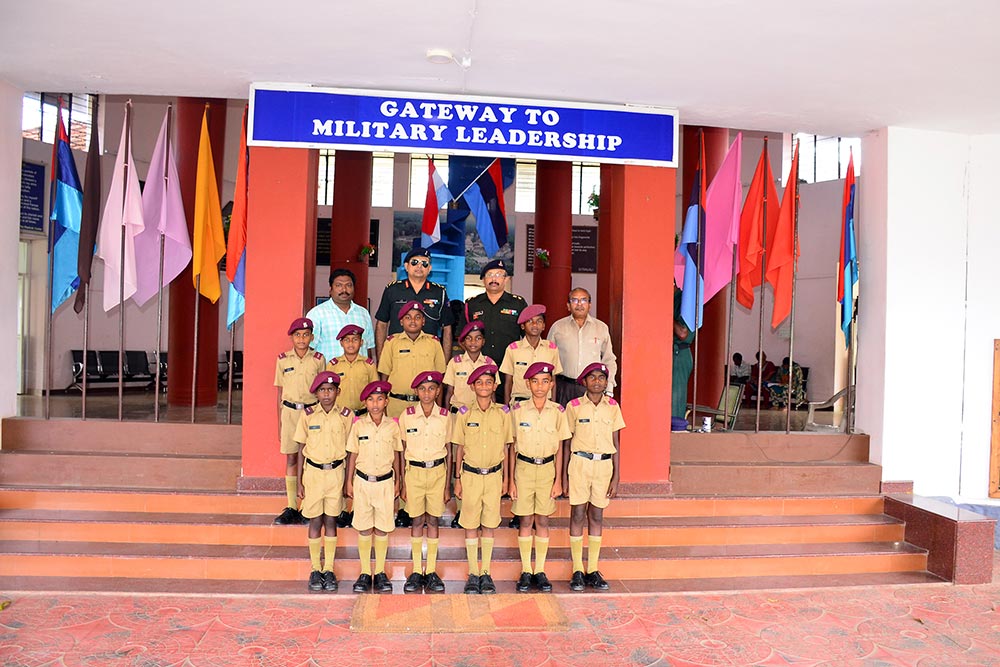 Using socio-emotional learning techniques, the Mathews got enga­ged in the learning process. To them, four areas need simultaneous development: academics, behaviour, relationship and decision-making. It is in the pre-teen years that the child begins to self-identify. “Often familial conflicts create an emotional disconnect between parents and the child,” points out Babu.

Further upstate, rugged Wayanad, too, has a large Adivasi community. The district has a Kanavu Makkal Trust, run by the tribals who studied in the Kanavu gurukul started by social activist K.J. Baby. Kanavu’s young trustee Saji Bomman had dropped out of school in 1996 when he was in class five. “I found the mainstream education very rigid. In our hamlets, we speak our own dialects; so learning Mal­ayalam is strange to us.” So, Saji joined Kan­avu Gur­ukul. “I had to relearn.” Today the set-up has 30 children. “We give them basic training in languages and maths. Then they dec­ide if they want a mainstream certification or go for skill development.”

The first batch of Project Shine children wrote their entrance test in January 2016. The exam centre was in Kozhikode. For many of the candidates, this was their first journey to the outside world. Seven children made it to Sainik School the first year. That was not the end of the story.

For the data hitherto gives a mean picture: eleven tribal children from Atta­ppadi had got into Sainik School (run by a society under the ministry of defence) in the past 50 years, but all of them failed to complete their education at the institution in Kazhakkuttam on the suburbs of the state capital. So the Mathews know it is vital to ensure the kids’ completion of the schooling. They took the seven children to their home at Piravom in Ernakulam district for three weeks to acclimatise them to boarding school rules and modern gadgets.

From helping the students grasp question papers to even taking care of their hygiene, the coaching was thorough.

The seven children were put in Rajaji house at Sainik School under house-master Mascon M. “Initially, these children had a lot adjustment problems but they have improved vastly. Most of them are brilliant in sports,” he says. “When the second batch came this year, we asked the older children to take one child under their wing and mentor them.” In 2016-2017, a hundred children were trained by Project Shine and four got into Sainik School and five (including two girls) into Navodaya Vidyalaya run by an autonomous body under the union government.

B. Shivakumar, 12, from the first Project Shine batch, has picked up medals as the best footballer and in athletics at Sainik School. Almost all the tribal children have a love for football but back home in Atta­ppadi, none of the schools has proper playgrounds. “ Attapp­adi is a treasure trove of natural sports talent,” says M.B. Rajesh, Palakkad MP. “Even without proper training, many of the tribal students win med­als at the state school meets.”

In 2016, Ramesh G.A. from the Irula tribal community in Attappadi was among the seven new facilitators to join Project Shine. A guest teacher at Agali government school, his experience with the children changed his approach to teaching. “Unlike in the regular sch­ools, here we connect with the parents every weekend. We visit them to enquire about their well-being,” he reveals. “I use stones or chairs or paper money to cre-ate a market or bank atmosphere to teach the child the concept of addition and subtraction.”

Another facilitator, Nikhil M.Z., notes that the facilitators and children sit on the floor while learning. “This year, a child named Manisha devised a method of subtraction of big numbers. So simple that I taught it to the others. We call it Manisha’s concept,” he smiles. Project Shine is training the third batch of a hundred children, who are enjoying both government and private support. Though only ten per cent manage to get into the two schools, the training at Project Shine vastly improves the social behaviour and academics of the other children.

There have been tangible changes on the ground level too. “One of my stude­nts,” says Lekhamol, “has told her mot­her to always boil water before drinking.” After the first year, the children have ­begun coming dressed in their best to the weekend classes; the older children have advised them to do so. It takes a village to raise a child—as the aphorism goes.

By Minu Ittyipe in Attappadi