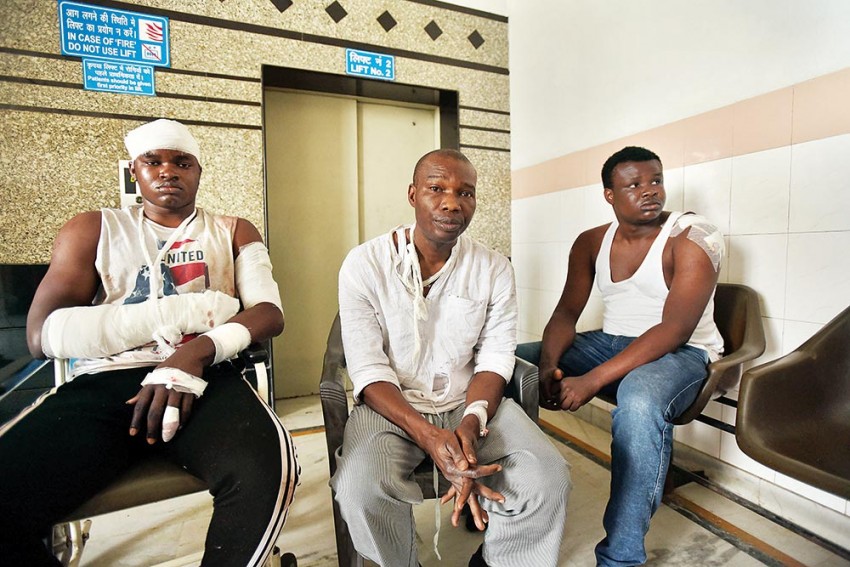 Random Targets
Nigerian nationals in a Delhi ­hospital after they were attacked by a mob
Photograph by Getty Images
Zia Haq March 31, 2017 00:00 IST Brewing Racism Blows Up 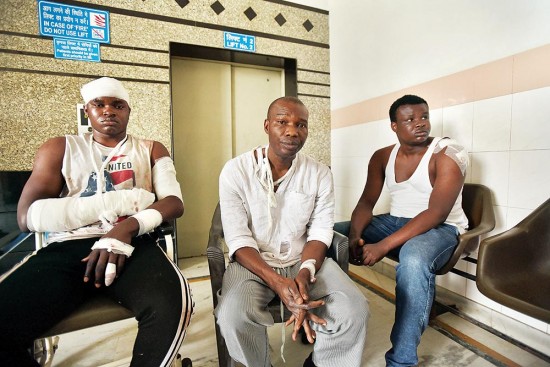 “We all bleed red, no matter your race,” says 20-year-old Nigerian national Ayesha ­Mohammed, as she reaches for a waiting taxi. She is literally fleeing her rented flat in Greater Noida’s Express Park View Apartments overlooking empty agricultural greens. Ayesha and her friend Maryam Ishak are moving to an undisclosed location in Delhi because Greater Noida is not safe for them for now. In the last few days, African nationals in the neo-city have been living in fear. Most of them have been told to stay indoors and ‘lay-low’ by concerned associations of African students in India on social media.

“I came to India because we’re told ‘Indians treat (people) well’,” says Ayesha, as her friend Maryam tries to call someone. The girls are studying computer science at Greater Noida’s Sharda University. Maryam’s call goes through. She hands over the phone to this correspondent. It’s her friend, from Delhi. The male voice from the other side mumbles out a ­request: “Can you let the girls go? And no photographs please.” The interview ends abruptly.

On Monday, a mob brutally assaulted five Nigerians at a mall. The crowd was on a protest march, after the death of 17-year-old Manish Khari. He was discovered in an ­inebriated condition by his parents just before he died of a ­cardiac arrest. Manish lived in flat B-16 of the NSG Black Cat Enc­lave. Manish’s father, Karanpal Khari, who is into real ­est­ate, blamed their Nigerian neighbours for his son’s death. The pol­ice picked up five Nig­erian nationals for questioning, but let them go because there wasn’t any evidence to link them to Manish’s death. The majority of the crowd comprised those from a particular community to which Manish belonged.

Last year, Congolese national Masunda Kitada Oliver was beaten to death in Delhi. It had sparked a diplomatic row. Then there were more reports of violence against Africans—from Delhi, Bangalore.

In the eyes of locals, Nigerians are the bad guys. “They are lawless. They are always brawling,” says Anirudh Singh, a ­security guard manning the NSG complex. Manish’s parents have left the place, he says.

On March 27, a group holding a protest after a death in Greater Noida brutally ­assaulted five Nigerian ­nationals

The word he and most locals use for Africans is ‘Habshi’, a medieval word for Abysinnians from the Persian Habashis. Habshis get drunk. “Habshis gang up. Habshis do drugs. Habshis don’t pay their bills. Habshis have wild parties,” are some of the impressions locals have of African nationals, always with that word along. In a satellite town like Greater Noida, the racism appears to be rabid, unapologetic , and made up of paranoid myths. “Habshis eat human flesh. They ate a small boy a few years ago,” says a convinced 20-year-old ­Mohit Phagna, a member of a self-styled vigilante group formed by some locals. “Once, they bit off an autorickshaw driver’s ear lobe after an argument,” adds Ramesh Singh, a village elder.

Policemen too harbour their doubts. “I’ve heard they eat ­human flesh. I don’t know if that’s true. They are always in some crime or the other,” says sub-inspector Madan Singh. ­Rahul Kumar, another policeman, agrees. “They are big time into financial frauds.” The two are part of a security detail deployed to protect Nigerians at the Nimbus apartment. But at Kasna police station, the records tell not many complaints are lodged against Nigerian nationals. And a duty officer confirmed there had never been any complaint relating to cannibalism.

“I don’t deny that youngsters bec­omes aggressive at times. That happens, right,” says 34-year-old Prince Abubacker, a Nigerian businessman in another apartment block. He denies the claims that Nigerians run drug rackets in the area.

The violence has since been brought under control. Foreign Minister Sushma Swaraj tweeted to say she called UP CM Yogi Adityanath to ensure protection. But racism has struck deep. “Why don’t they go back,” says Phagna. That’s what white supremist Americans are yelling out to Indians in the US too.

Bowing To Her Lordship, Seriously