What’s with the air in Delhi that a festival of lights plunged it into darkness? Can we read the signal in the smog? 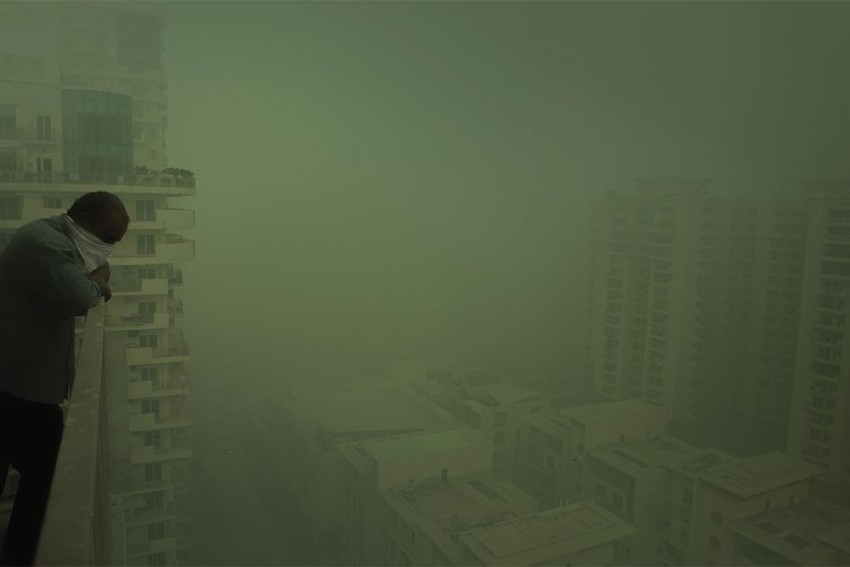 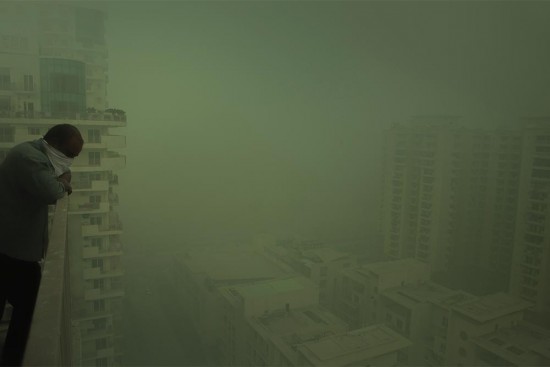 It is an emergency, and there is no other way to look at it when ­Delhi government’s health advisory this week is that we’re all grounded. “Stay indoors,” they said. No, we have not been hit by the Zika ­virus, and neither is this a Hollywood apocalypse movie. Yet for those walking around like they’re headed to a masked ball—wearing face masks that can look like anything from simple surgical masks to intense Darth Vader-­esque masks—there’s no fun at this party. In fact, it is being described quite accurately as “chilli in my eyes”.

Social media, from being awash not so long ago with tricolour filters on profile photos, now has people posting views from their windows—of nothing. And that’s not because of their preferred Facebook filter. It is because there actually is no view, ­because there is no visibility.

Diwali crackers are not the primary cause of Delhi’s ­pollution, but they bring out the worst in an ugly Delhiite, an uncaring, ­insensitive boor.

The gunfire simulation of Diwali night brought Delhi’s pollution to its climax. No, it didn’t cause the pollution, but it tipped the situation to a choking, suffocating, gas-trap. The widespread “say no to crackers” campaign doesn’t seem to have worked.

Kanwaljeet Singh, living in a posh Gurgaon locality, was out on the road on Diwali night bursting crackers way past midnight with his family in tow. “What no-crackers? It is not as if we burst crackers every day,” he says, showing no sign of guilt over his contribution to the post-festival haze. “It is just one day in a year. That surely cannot cause pollution to last a lifetime.”

He is proud of his two children, aged nine and six, for having strong immunity. “Both my children have lungs of steel,” he says. “If we keep them cocooned, they will never develop immunity. The younger one coughs once in a while during change of seasons, but she is mostly healthy.”

Singh must be among the lucky few, but the National Capital Region is just not a safe place to breathe in anymore. Everyone from the chief justice to the chaiwallah is breathing the same toxic air. It’s a class-equaliser. And yet, even as we move our attention from dengue and chikungunya to pollution, nothing is being done about this massive public health crisis. 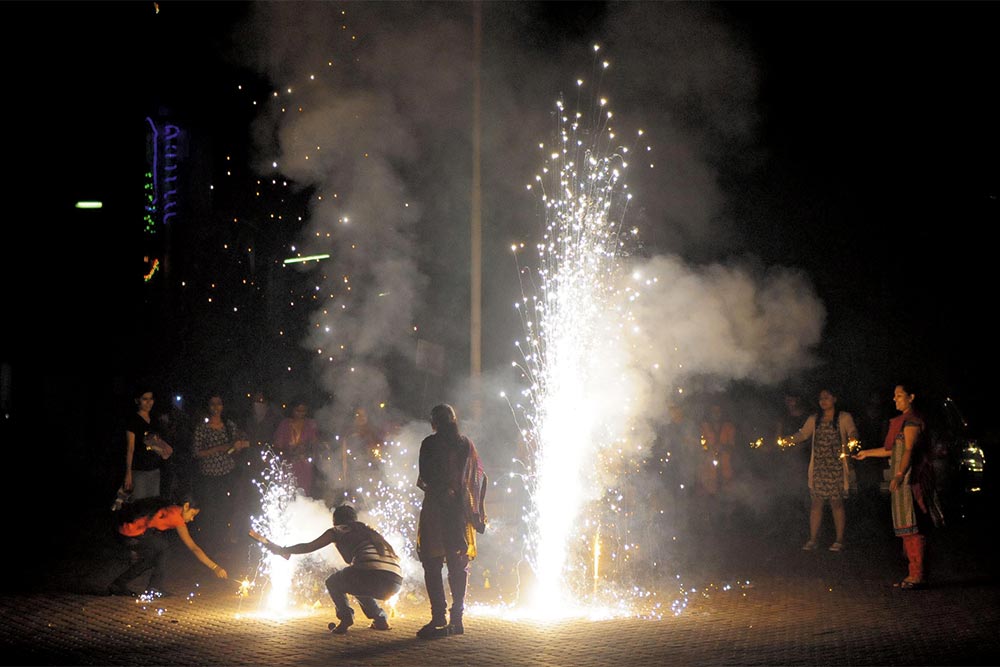 The most vulnerable to ‘death by breath’ are young children, the elderly, those whose bodies are weakened by diseases such as cancer or diabetes, besides those already suffering from respiratory problems. In young children, respiratory systems are not developed enough to withstand the onslaught of poison, while among the elderly the systems are deteriorating. In the case of those suffering from other non-respiratory diseases, the weakening of their immune system due to those conditions makes them prone to respiratory problems as well.

Sameer Kashyap, a 30-year-old in a joint family with several young children and elders, is well aware of the risks involved. He is one of those whom the no-cracker campaign see­med to have irritated. “I stopped bursting crackers two years ago, out of concern for the environment,” he says. “But I don’t like people telling me not to do things. I know what is good and bad, don’t keep pushing me. Telling us to stop crackers is like telling a diabetic he can’t have gulab jamun on Diwali.”

Kunal Vashisth, too, took this year as an exception. The 25-year-old law student says, “I hadn’t been bursting crackers for almost six years, because I didn’t want to bother the elders and dogs in my house. But this year, one of my dogs died on Diw­ali. I was depressed. So I burst a string of 5,000 crackers,” he says.

However, the pollution has taken a toll with a large number of people affected in one way or the other. For Radha Kishan, an elderly man in his 70s living in Pitampura, Diwali was no festival of lights. In fact, his weak lungs got darker. Having already suffered from asthma for about six years, the crackers hit him where it hurts. His son Rohit Chabbra is worried. “As the festival progressed, my father’s health fell,” says Chabbra. “First, his blood pressure went dangerously low. Then he was admitted to the ICU. We shifted him to the ward, but now he is back in the ICU. He is on oxygen support.” Chabbra had to take a week off from work, and the bills at the private hospital have set him back by more than Rs 1 lakh. “We need a ban on fireworks,” he says. “We need a ban on heavy and polluting vehicles also. Crackers are such a big part of Indian culture that people are not going to stop bursting them on their own. They have to be banned.”

Diwali, however, is not the cause of the more systemic pollution that north India faces. It only brings the prevailing menace to a dramatic pitch, as it finally did in the capital, triggering a shutdown of schools, industries and construction this week. A study by IIT Kanpur, commissioned by the Delhi government in 2013, lists road dust as responsible for 56 per cent of PM10 emissions and for 35 per cent of PM2.5. Vehicle emissions account for about 25 per cent of PM2.5, of which trucks—not cars or bikes—are actually the major contributors. This poses a challenge to the Delhi government’s most flamboyant attempt at controlling pollution—the Odd-Even scheme for traffic.

PM2.5 is a fine particulate matter and poses a hazard as it can enter the blood stream and get lodged in the lungs. It has been shown to cause asthma and other respiratory ailments, cardiovascular pro­blems and even cancer. Air pollution has been studied as a cause for stroke, hypertension and diabetes, and also for its effects on the brain and the foetus. A 2012 study by the Chittaranjan National Cancer Institute of Calcutta covered nearly 12,000 children in Delhi and found that every third child had reduced lung function. Their sputum contained iron-laden macrophages, indicating a pulmonary haemorrhage.

So how does one protect oneself? Face masks can only do so much. They cannot, for instance, protect you from “chilli in the eyes”. And the instruction to “stay indoors” is just not a working solution for thousands who sleep on the pavement, drive autos or sell their wares in the street. This might be why people like Chabbra want everything that pollutes to be banned, including crackers on Diwali.

The fireworks industry too doesn’t buy the blame that’s being pinned on them. K. Mari­appan, secretary of the Tamil Nadu Fireworks and Amor­ces Manufacturer’s Association, says cra­ckers cannot be responsible for the pollution. “The intense smog after Diw­ali is only a coincidence,” he says. “Our fireworks from Sivakasi are burst all over the country, but we hear these complaints only from cities like Delhi and Mumbai. So there are clearly other factors contributing to pollution there, which exist long before and after Diwali.” 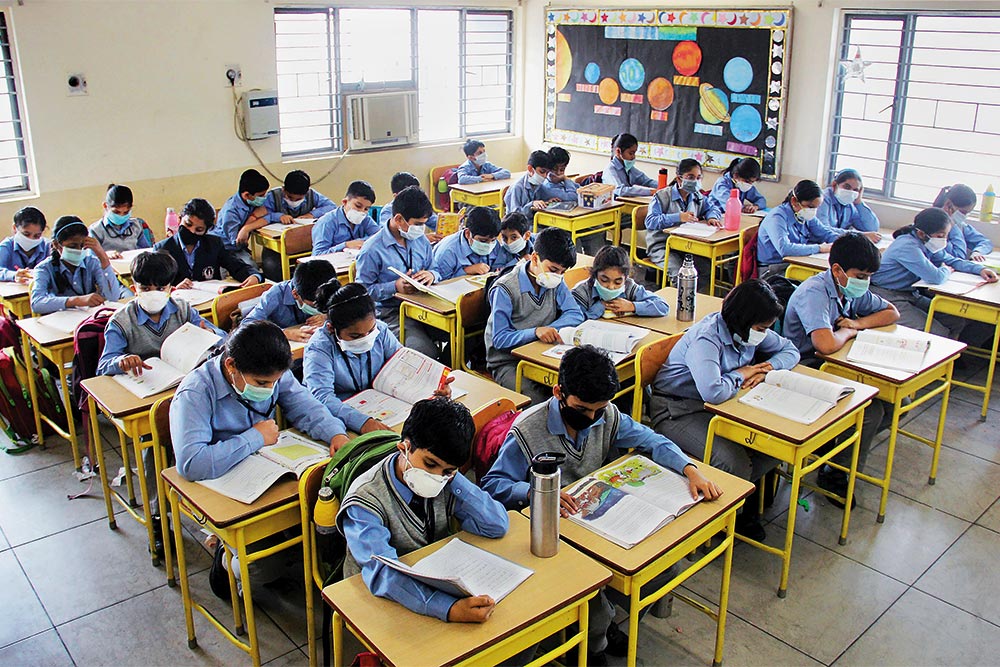 Students at a Gurgaon school, masked to stay safe

Why should we care? The cracker industry argues that a stricter control on Diwali will affect livelihood and industry. Some right-wing voices have gone so far as to say that all those opposing firecrackers are somehow anti-Hindu or anti-­Indian. But should these stakeholders give centre-stage to what concerns everyone—our health? “I won’t even consider private int­erests as a party to this conversation,” says environmentalist Vimlendu Jha, founder of Swechha, a Delhi-based NGO. “This is not a GDP discussion. This is a discussion on life and death, and we can’t allow private interests to take over.”

The inability to understand the complex science involved leads to a certain degree of complacence. “It’s not only people with asthma who are at risk here,” says Dr P.P. Bose, chest physician at National Heart Institute. “Given that a significant chunk of our population alr­eady has issues like diabetes and cancer, they are also a high-risk group for picking up respiratory problems. School children, who start early in the morning, get hit by intense pollution. In some way or the other, everyone is at risk.”

Bose is seeing many patients who he had treated a long time back returning with their problems aggravated. “When you get new patients in their 30s coming to you, it means they did not have a genetic issue, but began to develop problems because of the environment,” says Bose. Dr Anil Gomber, chairman of the Delhi chapter of the Association of Physicians of India, says, “The pattern we used to see before was of patients with chronic issues, or patients whose problems got aggravated due to the pollen season. Now we see patients whom we wouldn’t normally expect to be having respiratory issues, and we see patients coming in all through the year.”

Given that countries with pollution levels less than Delhi’s have shut down, Jha rues how late the response was for what has become an annual occurrence. Several places in Delhi register at the upper limit on pollution meters. “Pollution meters cannot take readings beyond the score of 999,” he says. “This means those areas could be ­polluted in a manner that is not even being measured. Just because the damage here is not imm­ediate, as it would be in a gas leak, we are complacent. But this is a slow death and that needs attention.”

What Delhi chief minister Arvind Kejriwal announced recently to curb pollution in the city were only temporary measures in an emergency situation. “These are not the real solutions,” Delhi’s deputy chief minister Manish Sisodia tells Outlook. “Delhi is in crisis due to vehicular pollution, illegal constructions and so on. Long-term solutions lie in steps such as regularising unauthorised colonies because once these are regularised, the systems there will also start functioning.”

On being asked what the issue of regularisation could have to do with the smog, Sisodia explains, “Dem­olition and construction of una­uthorised colonies happen sim­u­­­ltaneously in the city, producing a huge amount of dust that gets mixed with vehicular pollution and aggravates the situation.”

Illegal entry of vehicles into Delhi is another factor that contributes to the pollution in the city’s air. “The Delhi government needs at least 200 officers and 70-80 vehicles to stop this,” says Sisodia. “But what can we do when things are being stopped? The files are lying in the lieutenant-governor’s office. To regularise colonies, the Delhi government, MCD and DDA have to work in tandem. Colonies where boundaries have been marked need to be regularised by MCD and then DDA can change the land use.”

Taking on the menace of pollution, clearly, calls for interventions at various levels and involve coordination among a number of agencies. “There is a multiplicity of authorities in Delhi but no one is willing to take up res­ponsibility,” says Sisodia. “It is only the elected government that is struggling to put things in place for a better Delhi.”