Not one for the great outdoors? Take in the sights from your living room 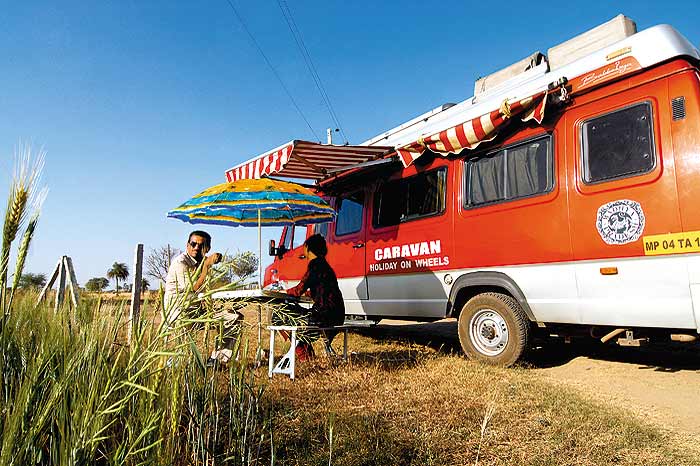 ‘MP ajab hai, sabse gajab hai’ sings R.P. Sharma’s phone as we call to confirm when he’s picking us up. Booked on a caravan trip from Bhopal to Udaygiri, Sanchi and back, this early morning reminder of the Madhya Pradesh tourism tagline sounds charming, though a trifle gratuitous. Sharmaji is at the wheel and in the hotel parking lot well before time, catching a quick read of the day’s news.

Pleasantries exchanged with him and his assistant, Mukesh, we take our seats, with plenty of room to spare, in the red refurbished Force van. It is quite the head-turner on the streets of Bhopal—passers-by take their time over the lettering on its side, ‘Holiday on Wheels’; boys pedalling their carts let their eyes dart to the windows for a peek inside. Some, though, give it no more than a passing glance. They have obviously seen one of these before. The state’s tourism department stepped on the gas to get caravan tourism running two years ago, and now has these mobile hotel rooms operating in three circuits: Bhopal, Jabalpur and Indore. From Jabalpur, you could take the caravan on a nature trail up to the forest reserves of Bandhavgarh and Kanha, while the Indore route joins the dots between Ujjain, Omkareshwar, Maheshwar and Mandu. Daytrippers from Bhopal can take a crash course in history with a tour of Bhojpur and Bhimbetka, and even spend the night in a designated caravan park. The lush hill station of Pachmarhi also figures frequently on itineraries (www.mptourism.com/web/pdf/caravan.pdf).

That flood of information bursts forth from Sharmaji, who rattles it off with the authority of one who can render Google redundant on the subject. It’s already his fifth trip this month (and we are only two weeks into March), he offers, and he has been driving caravans around for holidaying families and friends since vacations on wheels first rolled out on MP’s streets.

Twenty minutes down the Bhopal-Vidisha road, the city bows out. Ochre wheat fields punctuated by huts and heaps of dung cakes, and daubed with an occasional scarlet splash of palash, fuse into a single moving image framed by our curtained windows. A view that follows us right through the journey. 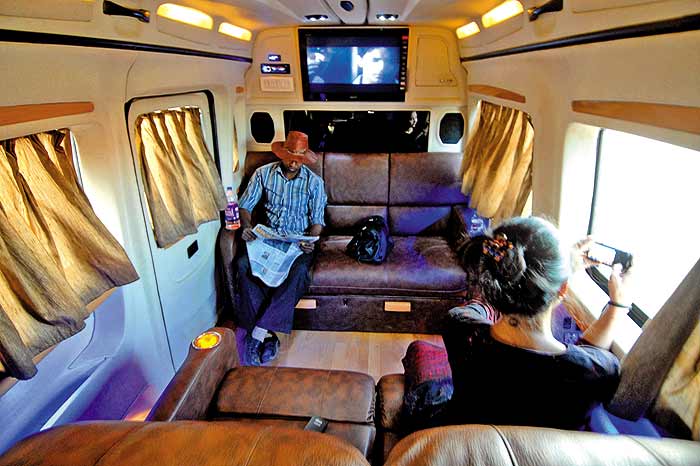 Some 30-odd kilometres from the city centre, the caravan rolls to a stop by a sign: “Tropic of Cancer”. Like all scrawlable surfaces in India, this signage too has had its share of “Amit”, “Chotu” and “Vikram” inscriptions, each tripper attempting to preserve for posterity his little roadside tryst with geography. We keep ours, minus the scribble, and climb back into the caravan, which is to be the focus of our attention till we reach our first stop, the Udaygiri caves at Vidisha.

The one thing that requires some effort is to keep your balance as you saunter from your seat to the inbuilt loo, fridge and microwave.

Our caravan, with its plush, state-of-the-art interiors that can light up like a fancy theatre at sundown, is centuries removed from the nomadic, rustic connotations inherent to its name. On its wood-finish floor sit three plump brown faux-leather sofas, two of which can morph into a double bed with some buttons and a key. If the vistas outside get monotonous, you can switch your eyes over to two LCD TVs, playing DVDs of Love Sex Aur Dhoka, Well Done Abba, and, well, Road Movie. Our mobile home for the day also has a mini fridge (though it contains nothing to chill except water) and a microwave. There is a tiny, functional washroom at the back of the trailer, with a motorised switch to get the water flowing. At the other end of the van, another button lets you roll up a dark glass partition to shut out the driver’s compartment.

Amidst the ease of all those one-touch operations, the one thing that requires some effort is to keep your balance as you saunter from your couch to the loo, fridge or microwave and back (opportunity for much hilarity amongst kids there). Indeed, a family or a small group of friends would not mind making this their cosy, jerky home away from home for a few fun days.
By the time we get to the sandstone rock-cut sanctuaries of Udaygiri, the air-conditioner is buzzing, and Sharmaji’s sunglasses are in place. Yes, the mid-March sun is already blazing, though noon is still over an hour away. Parking our red beast near a lake facing the caves, we stand before an imposing sculpture of Vishnu in the Varaha avatar—our introduction to this 3rd and 4th century AD document of Gupta art. No ancient paintings here like you’d find in Bhimbetka, but the 20 caves nestling in the massive rock faces are worth a visit.

Sanchi, our next pitstop, is a bumpy half-hour ride away. From the parking lot of this World Heritage Site, the slow crawl of tourists up the bougainvillea-lined walkway to the Great Stupa offers a favourable comparison with the single-minded march of army ants. We troop on, likewise, behind them, circumambulating stupas, monasteries, gateways, temples and pillars. From atop the Great Stupa, carpets of crops in yellow and green, as far as the eye can see, make for a stunning vista. Look carefully, and you could catch a train chugging silently in the distance, its noisy rattle carried by the winds.

Back in the caravan again, Mukesh politely enquires about our gastronomic plans. Would we like to wait till we reach Halali Dam, with its “bahut badiya” MP tourism lodge and restaurant? Yes, please. And so we are off again, sinking back into the sofas, the thought of rippling dam water particularly appealing in the dry heat and dust of the heart of India.

Built on the Halali river, the dam is a soothing stretch of blue with colourful paddleboats anchored near its edge. At the attached hotel, lunch is a simple, flavourful meal of butter-drenched tawa roti, kadhai paneer, dal, raita and gulab jamun. Hunger pangs quelled, we’re ready for the final leg of the journey back to Bhopal. Only, we couldn’t quite call time on the trip without having the caravan’s red-and-white canopy—a veritable holidayers’ flag—pulled out over our heads. We do just that, sitting on a table-chair set, complete with a patio umbrella that had, hitherto, lain folded inconspicuously under our seats. Around us sway tall, green stalks of wheat, while the waning sun glints off the glass edges of our caravan. How would one best describe a holiday built on days like this? A moveable feast, maybe?

They Weren’t Even Cubs