Surprising positives and a few silences mark Modi’s US visit 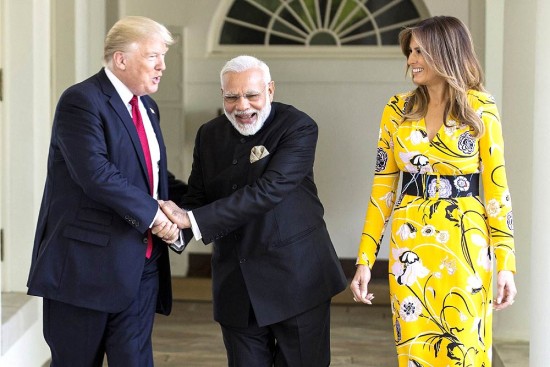 Both in tone and substance, Prime Minister Modi’s US visit has gone off better than exp­ected. The atmospherics have been good, with protocol exceeding gestures such as Melania Trump joining the President to receive him at the White House adding to the warmth of the welcome. Trump set aside considerable time to engage with Modi, with a reception and dinner at the White House, apart from a one-on-one meeting and delegation level talks. This was important, as it gave an opportunity to the two leaders to size each other up better and strike a personal rapport—a major objective for India. Disregarding the composition of the Indian delegation, the US side fielded an exceptionally high-level team for the talks with Vice-President Pence, Secretary of State Tillerson and Defence Secretary Mattis (even though these two had met Modi separately), Commerce Secretary Ross and Treasury Secretary Mnuchin present. This indicated that the US side wanted full-scale talks. It will be useful for the future that all key decision makers in the new US administration have had full exposure to exchanges on various issues.

Just before Modi’s arrival, the US designated Hizb chief Syed Salahuddin as a ‘specially designated global terrorist’. This step was clearly under discussion, but the timing of the announcement highlighted this political gesture to India on the terrorism issue and conveyed a discomfiting signal to Pakistan. The Hizb-ul-Mujahideen (HuM) cla­ims to be a Kashmiri resistance movement, as distinct from Pakistani jehadi organisations operating against India. By designating its chief as a terrorist, the US has eroded the political legitimacy of HuM and Pakistan will henceforth be seen as sheltering another international terrorist. Pakis­tan has come under similar pressure before, as the LeT, JeM, the JuD and its chief Hafeez Saeed have all been designated as terrorist outfits or individuals by the US and the UN, but it is inured to it and continues to support them. Salahuddin’s designation may not materially change Pakistan’s rogue conduct, but it delegitimises nonetheless the Kashmiri cause and marks a shift in US position on Kashmiri resistance to India’s sovereignty over J&K.