Yes, the biggies have delivered. But a caveat—the sector as a whole is a mixed bag. 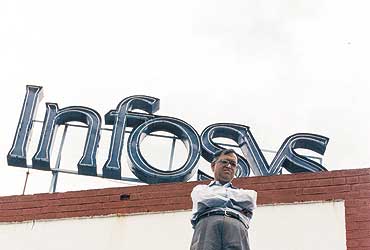 outlookindia.com
-0001-11-30T00:00:00+0553
It's the season of good cheer after a long spell of gloom. Indian software companies are ushering in the festive season in the right spirit with announcements of robust revenue growth for the second quarter of fiscal 2003. Leading the pack are the big-ticket firms, Infosys Technologies—with revenues of Rs 879.57 crore during Q2, 2003—and Wipro—posting revenues of Rs 679 crore in the global IT services and Rs 42 crore in IT-enabled services (ITES) in the same quarter.

These firms are mirroring a trend that indicates a gradual resurgence in the fortune of IT companies, who have battled a widespread slowdown in the global tech sector, through 2001-02. Now, it looks like the good times may just be around the corner. Says Avinash Vashistha, co-founder and MD, neo IT, a consulting firm, "Offshore projects (work contracted by global clients to development centres based in India) provide clients with net savings of 20 to 50 per cent in IT spends at a time when their budgets are shrinking. So the question is not whether they will outsource but when. It's a windfall for Indian companies, who are best positioned to leverage this trend."

But if one believes this logic, it would be jumping the gun a bit. That's because, alongside the Infosyses and the Wipros are firms such as Mascot Systems, HCL Infosystems and Satyam Computers that have not done so well in the last quarter. All the latter firms have posted minor to major declines in net profits, even as revenues in the first two cases have risen. Clearly, they are facing tremendous pressure on margins and profitability. So, as a senior IT manager explains, "The men are getting separated from the boys in the Indian IT sector."

Before we figure out why that's happening, let's look at the new window of opportunity that has opened up for some of Indian IT players. According to Nasscom, this is a second wave opportunity that is unfurling for software outfits. The software industry association estimates show a growth of 62 per cent in exports system integration services, 70 per cent in software outsourcing and package implementation, and 4.8 per cent in R&D services. At the same time, revenue from ITES is due to touch $21 billion by 2008.

Even in the US, which contributes to the bulk of software projects grabbed by Indian companies, IT spends are on the rise. And expected to grow further this year. There are other positive indicators too. Hirings have started and volumes are growing. In the past quarter, Infosys added 2,065 employees and others too took on additional employees. At the same time, Wipro has seen the addition of 17 Fortune 1000 clients while in revenue terms, it witnessed a 12 per cent growth last quarter. Finally, the cost of a typical software project sourced offshore today is $20 million as against a past average of between $1 million and $5 million. Adds Sunil Mehta, vice-president, Nasscom, "The pricing model has also changed to more fixed-price projects with higher margins from the old norm of retainer fees."

But what has changed is that Indian companies can no longer position themselves as partial solutions providers. The days of basic programming and grunge coding work are over. Customers now evaluate offshore contractors on their ability to offer lower costs and more importantly, a time-to-market advantage. Says V. Srishar, CEO, CRV Consultants, "Speed, efficiency and an understanding of the business cycle are crucial." Holding on to customers to build a long-term relationship is now the name of the game. Explains S. Gopalakrishnan, coo and deputy MD, Infosys, "We have focused on broadening our portfolio of services providing end-to-end solutions and deepening our relationship with customers."

Obviously, in such a scenario, small- and mid-size firms tend to be left behind.Unlike the boom times, they find it difficult to get new clients or new projects. That's reflected in their financials too. But, in an era where brand recall is proving to be the winner for large firms and project sizes have grown, their smaller counterparts are opting for a novel approach to survive—and thrive. The latter are opting for the consortium route, where they join hands with the bigger ones, to bid for projects. Says Padmaja Krishnan, VP, HCL Perot Systems, "Right now, it's the economies of scale that matter most."

Going Dutch could then prove to be a way out for them. Says Vishnu Dusad, MD, Nucleus Software, "The consortium approach is a growing trend and will not flatten in the next three to five years." Consider the case of Hexaware, a tier-II company that bagged an ITES deal in tandem with the tier-I HCL Technologies—a deal that was engineered by neo IT. Concurs J. Shankar, corporate treasurer, Wipro, "We could even see mergers between the smaller companies since it allows them to increase their leveraging abilities."

Still, the gap between the leaders in the sector and the mid-size companies is expected to grow. This is the reason why industry-watchers like crv's Sridhar caution that "despite the healthy revenues in the last two quarters, the IT sector still needs to build end-to-end domain capabilities and revisit their existing business models for this to be a sustainable wave". For instance, growth in the future is pegged to come in from traditional manufacturing sectors, where software providers can work with managers in specific domain areas and not just with the cios or the IT executives.

Says Arjun Malhotra, chairman, Techspan, "A good example is Schlumberger (an oil industry services major) providing software services to the oil industry and any of the Indian software majors saying they have an oil and energy vertical." The difference in rates that a customer will then pay is the reflection of the value he places on such expertise. In the variable-cost model for a software services project, the cost of the engineer is 30-40 per cent of the selling price and it's the management of infrastructure and management costs that provide the ability to make the 25-30 per cent margins that drive the specific success stories.

Expanding into newer areas could also prove to be a boon. Listen to R. Mohan, ceo, Hinduja TMT: "Adding on ITES, both voice-based and data processing, has helped companies to retain customers." At his company itself, the focus on ITES has helped revenues to grow to Rs 28 crore in the first half (ended September 30) this fiscal, up from Rs 13 crore in the corresponding period the previous year. Even MphasiS BFL is busy reinvesting cash surpluses from IT services into the fast-track bpo (business process outsourcing) business. Says Jeroen Tas, president and coo, MphasiS, "Hyper growth in the next two years will come from ITES while software services will offer opportunities to leverage proven capabilities."

Firms like Hinduja TMT are also exploring a pricing model "where customers pay as they use and not upfront for a software project". In this model, an offshore vendor designs the solutions, implements and maintains it at the client location, backing it with transaction services. The client does not pay for the design upfront but coughs up money every time the solution is used, thereby maximising the offshore contractor's need to offer workable solutions. It's a risk-and-reward gamble that a fair number of mid-size firms are exploring in this competitive scenario. "Pay-per-use can well be the overriding model for the future. Finally, viability will be based on managing the risk that it offers," explains Tas.

In this slightly gung-ho environment, where the excitement levels seem to be increasing each passing day, new markets in Europe and Australia too are beckoning Indian companies.As these markets lag behind the US in terms of opportunities by about three to five years, they make for fertile hunting grounds even for smaller outfits that are showcasing their services there. Says Ravindra S. Datar, senior analyst, Gartner India Research & Advisory Services, "Some of the big deals in banking and telecom sectors are examples of the huge potential that even the Indian domestic market can offer to IT companies." Clearly, for an industry poised for a return to the glory days of the '90s, the world is now its oyster.

However, the glory will be restricted to firms that cut short the learning curve and gear up to meet the new challenges. For those who still get bogged by down by past mindsets, exit may well be the only option. In fact, the growth posted by some of the bigger companies may be coming at the expense of the smaller players, who are slowly getting nudged out of the business. So, don't yet start writing out that success story. Wait for at least a few more quarters to figure out just who will survive and who will die. The Indian software story is not over yet.