The Samba-ists are a refreshing change, but don't hold your breath waiting for a rub-off on local lads 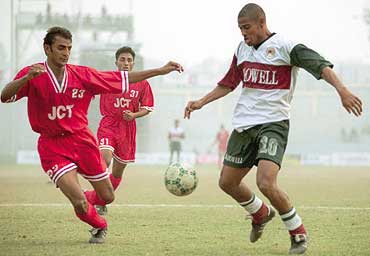 outlookindia.com
-0001-11-30T00:00:00+0553
On a cold wet Sunday afternoon—as the current edition of the once-popular Durand Cup meanders on in a near-empty Ambedkar Stadium in Delhi—two former India stars ponder their responsibilities. Huddled in a corner of a sofa is a frowning Mohammed Habib, Indian soccer legend and now coach with Calcutta's Mohammedan Sporting, whom the All India Football Federation (aiff) has requested to spot talent for the annual Arjuna Awards. The last time a footballer managed one was three years ago. But the sheer poverty of calibre on view leaves the veteran in a piquant spot—if he had his way, his choice would be not any of the local boys peddling their wares but one from among the freshly-imported crop of Brazilians! They simply stood out, despite their domestic colours.

In a similar predicament is Subhas Bhowmick, former India centre-forward and now East Bengal coach. His chief worry is—his team has no reliable scorer, save for a new Brazilian recruit.

Brazilians? A Rio carnival in India? A Houdini trick to infuse life and joy back into a rigor mortis-stricken game? Is India finally waking up to the realities of world football, adopting trends seen in Japan's popular J-League or Malaysia's M-League where they import thoroughbred footballers hoping for a rub-off on the locals?

Nothing of the sort. Yet, it's a whiff of fresh air in the mind-prison that is Indian soccer. The endless free fall in performances has forced clubs to resort to desperate resuscitation measures, and what better than a dose of samba—i.e., stars from that repository of soccer magic, Brazil. A tinge of professionalism, fostered by the Kuala Lumpur-based Asian Football Confederation, has ensured that clubs, instead of merely hiring student-footballers from Africa, are turning to Brazil via valid fifa agents.

This is not to say a discarded Romario from Brazil's Vasco da Gama or a veteran Dunga from Japan's Jubilo Iwata is headed here. What's happening is that several relatively young players from Brazil are joining Indian clubs for a dual purpose. First, Indian clubs offer comparatively good money (judged against the players' experience) and second, Indian clubs play relatively safe soccer, compared to the rough-house standards in the European leagues, thus reducing chances of career-threatening injuries.

It's almost like earning while vacationing. The best of the current lot—as many as seven Brazilian players and a coach have been here since last year—is undoubtedly Jose Ramirez Baretto, a nippy frontliner who joined Mohun Bagan after a two-year stint with Kawasaki Frontiers, a popular J-league club. "A footballer's job is to score or defend. I am just doing my duty," says the soft-spoken Baretto, whose skills are presumably attributable to the legs of god (he has the words "Jesus my Saviour" scripted on his jersey, in English and Bengali). Seconds later, the 23-year-old sensation, whose role models are Frenchman Zinedine Zidane ("for being a total footballer") and countryman Romario ("for scoring goals at will"), adds in halting English: "My visit to India was more spiritual than anything else. I wanted to be in Mother Teresa's land for some time. As for standards, soccer's the same everywhere. My playing in India does not mean I am losing out on standards. Indian soccer gives me the respite I need before I take the final plunge. It could be any of the pro leagues. But my ultimate dream is to play for Brazil." Says his Bagan teammate and fellow-Brazilian Amouri D'Silva: "We have got this peculiar responsibility. One (Baretto) has to score and one (himself) defend. So far, it's working fine."

Though it hasn't been made public, Barreto's annual fee is unofficially pegged at between Rs 35-40 lakh. Amouri earns perhaps half that. Bagan officials admit the money involved could ensure as many as four Indian players, but the club has little choice."What do you want us to do, let the two boys leave and die ourselves?" asks one official indignantly. Says aiff secretary Alberto Colaco: "I only wish we had at least one Baretto in the Indian side."

Sports cognoscenti agree. The departure of Bhaichung Bhutia to the English league second division and the dwindling performance-graph of stars like I.M. Vijayan and Jo Paul Ancheri has left Indian clubs with virtually no option but to depend on international life-support to keep themselves going. "There's hardly any alternative. The fact is that the country does not have a single charismatic footballer. The star or glamour value is all with the foreigners, especially the Brazilians," remarks veteran soccer writer Novy Kapadia. Rupak Saha, sports editor of leading Bengali daily Ananda Bazar Patrika, is in complete agreement: "What is the performance of the Indians? Why should there be a song and dance about them?"

Probably the Brazilians knew it as well. Today, clubs don't have to make much of an effort to lasso in players from Brazil. Surf the Net, especially websites of Goan clubs, and it's all there before you—name, age, performance, recommendations and even video clips. Sample this one from the signboard of the Dempo Sports Club website (Dempo was the first Indian club to hire a Brazilian coach, Francisco Gonsalves, and players way back in 1997-98): "I am the manager of FC Amadense (Brazilian team) and would like to offer Brazilian players. Also, I would like to represent any Indian team in Brazil for business—Marcos Gusmao, Brazil."

Another Goan club, Vasco da Gama, has signed on Brazilians Marcos Alexandro do Carvalho Pereira and Rui Wanderlei Weis this year, both from Cene in Mato Grosso du Sul, to fortify an attack that was largely unproductive last season. And the results are already there. With five goals, Weis is the second highest scorer in the ongoing National League.

Again, for many Brazilians, it is not always an issue of finding space in a club where standards are superlative. "There are Brazilians in Thailand, Singapore, Myanmar and several other nations where standards haven't touched the moon. These are professional contracts signed for very, very special reasons," says East Bengal's frontliner Jose Carlos da Silva, whose previous assignments were with Sao Paulo's Santo Andre Club, Mexico's Martes Morelos and Winnerway of China.

So where does this leave the homegrown variety? Experts claim the average standard of the Indian footballer is so sharply below international class that even planning any improvement does not make sense. And as for the positive rub-off from the Brazilians, there's only some bizarre side-effects to show. In a recent National Football League match, two East Bengal players came out with shaved heads and white boots. "But shaved heads and white boots don't make them David Beckham," quips Kapadia. "Their side lost 0-4 to Salgaocar." It seems the samba magic in India, at least for now, rests solely in the hands—or rather at the feet—of the foreigners.