Bowl Him A Chinaman

And the Doklam impasse drags on. To resolve it, India will have to forge a new diplomatic flexibility. 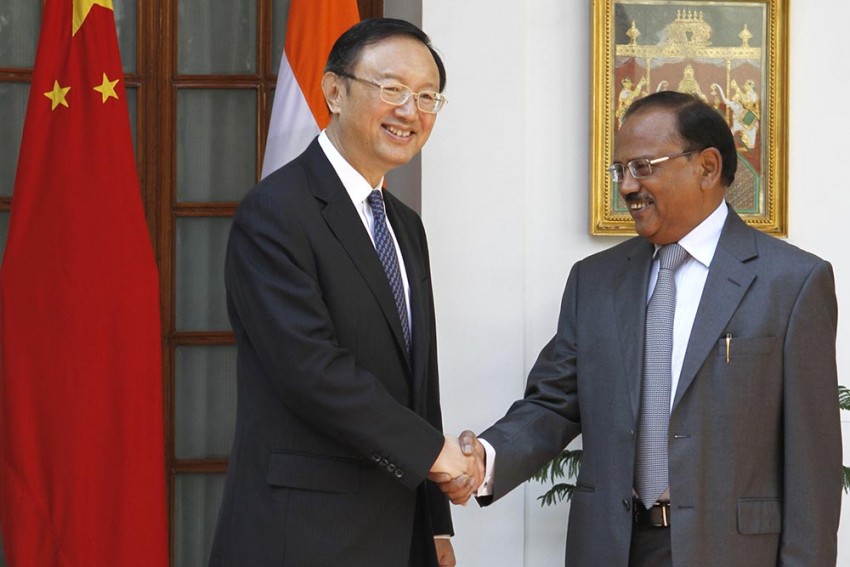 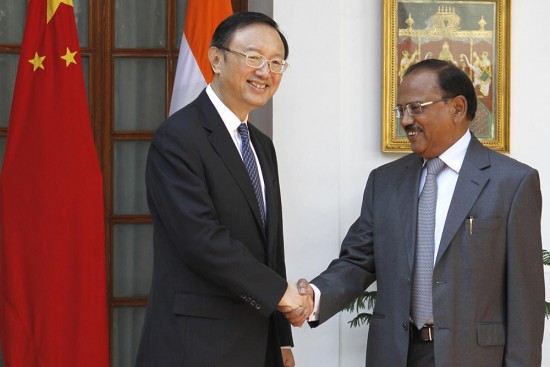 This crisis, metaphorically speaking, will not be ‘over by Christ­mas’. The optimism about an early resolution of the Doklam standoff is fast receding. The evo­lving reality of the ground situation in the high altitude plateau adj­oining Sikkim is now forcing Chinese and Indian leaders to accept that their res­pective troops deployed at the China-India-Bhutan trijunction are in for a long haul that could even stretch into the winter months and beyond.

If options are to be weighed, a protracted, and uneventful, impasse certainly seems to be a better one than a war between the two nuclear-armed neighbours, as hardliners in China had—perhaps wishfully—predicted since the Doklam issue came into public light more than a month back.

Lest speculations and analyses about the crisis go the bellicose way, the Union Ministry of External Affairs spokesman Gopal Baglay reminded mediapersons about a consensus agreed upon by India and China during the Shanghai Coop­eration Organisation meeting in Astana last June, that “differences between them should be addressed in a manner that they don’t become disputes”.

There is a consensus that India-China will not allow differences to turn into disputes, says MEA’s Gopal Baglay.

As Indian National Security Advisor Ajit Doval met his Chinese counterpart, State Councillor Yang Jeichi, on the sidelines of the two-day BRICS-NSA meeting in Bei­­jing (on July 27-28), the possibility that dip­­l­om­acy, rather than a milit­ary line, should be pur­­­­s­­ued to break the logjam, seems to have brightened.

Doval, along with his counterparts from BRICS countries, is scheduled to call on Chinese President Xi Jinping. But that will be more in the nature of a courtesy call. However, his meeting with Jeichi is the highest-level eng­agement between the two sides since the Doklam standoff.

Prime Minister Narendra Modi and Xi Jinping had briefly met on the G-20 Summit sidelines in Hamburg on July 7, but they had spoken mainly about the progress of BRICS, not the seething crisis in Doklam. The Doval-Yang meeting, however, is specifically to discuss ways to break the impasse and gathers significance since both are also “Special Representatives” of their respective governments on the boundary question.

Though both sides are stressing on a peaceful resolution to Dok­lam, neither is willing to budge from their stated position. India’s stand was articulated by its foreign minister, Sushma Swaraj, when she emphasised that the resolution to the standoff lies in the simultaneous withdrawal of soldiers by the two sides from the area under dispute. But the Chinese are not willing to concede  even this one inch. Foreign minister Wang Yi stressed rec­ently that India must “conscienti­ously” withdraw its soldiers from the area since it has admitted that it “int­ruded” into Chinese land.

While the status of the Doklam plateau and where the trijunction should be located are disputed, India admits that it had to step into Bhu­tanese territory (not Chinese, as claimed by Beijing) to stop the unilateral att­empt by China to build a road and change the status quo at Doko-La.

But if a formula for defusing the tension was agreed upon between the two sides after the Doval-Yang meeting in Beijing, the details, for obvious reasons, were not made public. The absence of any official statement coming from either China or India has led to speculations as to how the standoff can be broken.

Fortunately, an opportunity for a thaw lies in wait. The forthcoming BRICS Summit will be held in Xiamen in China’s Fujian province in early Sep­tember and therefore, some sections in South Block believe that the Beijing leadership might work overtime to break the impasse at Doklam by then. Since PM Modi is among the leaders scheduled to attend the summit, there is a view that no Doklam cloud should hang over the deliberations—to strengthen the outfit and its leadership role in res­haping the world order—amongst BRICS members.

Others believe that both China and India have agreed to segregate their cooperation in BRICS from the Doklam impasse. Perhaps, that could be the reason why Modi and Xi did not raise the standoff when they met in Hamburg. This argument gains credence by the fact that bef­ore Doval, three other Indian ministers had been to China in connection with the forthcoming BRICS Summit. This clearly indicates that India, like China, is perfectly comfortable with separating the BRICS and Doklam issues, provided it does not deteriorate into an armed confrontation.

However, apart from the BRICS, the 19th Party Congress of the Com­munist Party of China also begins from October. Many observers see this as a more imp­ortant event for President Xi as several members of the seven-member Polit­buro’s standing committee would step down. If Xi has to get his way and bring in leaders he trusts to fill up these crucial vacancies, over-riding candidates of other factional heads, he will have to ens­ure his position in the party is unassailable. The Doklam standoff with India can come in the way of burnishing that image of President Xi, also the CPC general secretary. By starting a war, China cannot force India to vacate its position in Doklam. However, an agreement can work to settle the issue more amicably.

But, if a simultaneous withdrawal of Indian and Chinese troops, as had been the practice during similar standoffs along the Line of Actual Control, is not possible in the case of Doko-La, as China insists that the dispute is not in territory claimed by India (it says Indian soldiers crossed the “already delimited” India-China boundary), what indeed can be the way out? To satisfy the Chinese, India can be the first to withdraw its troops. But this can only happen after China gives a specific assurance that it will not resume road construction activities and unilaterally try to alter the status quo at Doko-La.

The Doklam standoff itself was not made in a season; there’s more context to it than is being appreciated. “The underlying causes of the current round of hostilities, which broke out last month in the tri-junction of Sikkim, Tibet and Bhutan, where China was building a road, run much deeper and are rooted in the deeper churning in the region as a result of the simultaneous rise of two great and proud peoples,” says John Garver, emeritus professor of international affairs at Georgia Institute of Technology, Atlanta. 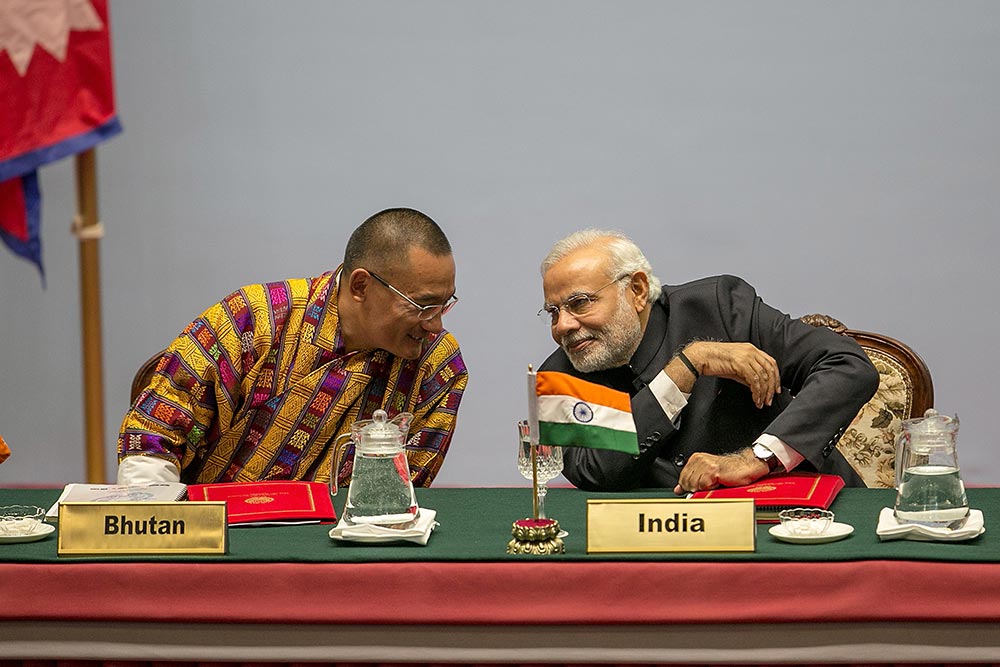 Garver, a veteran watcher of Sino-Ind­ian rivalry, argues in an opinion piece in the South China Morning Post that what is happening in Dok­lam should be viewed as an att­empt to establish which of the two—China or India—is the paramo­unt power in the South Asia-Indian Ocean Rim (SA-IOR) region. Garver tells Outlook, “I believe China’s strategy is to win without fighting. To build gradually a position of overwhelming strength, compelling India to recognise the untenability of try­­­ing to contain China. For example, by building roads to the Siliguri Corridor, und­oing India’s special relations with Bhutan, ext­ending rail to Kathmandu, anti-­access submarines to Pakistan etc. I seriously doubt the United States, let alone Japan, actually entering a China-India conflict. They will maintain a pro-­India neutrality only. This is the point underlined in commentaries in the Chi­nese media as well. The bottomline of the Chinese view is clear: India is unable to contain China in South Asia and India ultimately recognises and accepts this reality.”

But whether this gets settled through a war or other non-military means rem­ains a worry in many quarters, especially among people in the high Himalayan nations—Nepal and Bhutan.

“We have to see the Doklam incident as indicative of the tendency of big countries to intervene in the affairs of small countries,” Gopal Khanal, a foreign policy advisor of former Nepali PM K.P. Sharma Oli was quoted in The Wire as saying.

Nepal’s geography, like that of Bhutan, places it between the two Asian giants and it finds many developments in Sino-Indian relations affecting it adversely. Khanal argued how jealously India had guarded its turf in this Himalayan reg­ion since the time of Jawaharlal Nehru and tried to block the entry of any other big power. “With China also looking to spread its influence in South Asia, and given India’s anxieties over China’s acti­vism, the two countries are bound to clash sometimes,” he added.

Others, like former Indian diplomat P. Stopdan points out that the real problem lies in India’s Bhutan policy. Refer­ring to PM Modi’s visit to Thimphu in 2014, Stopdan wrote in a column that it was dominated by economic themes, including the need to develop Bhutan’s rich natural resources and hyd­­­ropower potential for mutual benefit. “But deep down he was painfully aware of the palpable signs of China stepping up contacts with Bhutan.”

India’s attempt to keep China from establishing diplomatic relations with Bhutan may not be tenable for long.

Stopdan argued that “bef­ore Modi came to power, Beijing had done sufficient ground work to cut India’s ‘sacred bond’ with Bhutan and create a string of political electrons along the Himalayan reg­ion from Arunachal, Sikkim, Nepal to Ladakh.” He also referred to the 2013 bilateral crisis between New Delhi and Thimphu that led India to stop gas and petroleum supplies to Bhutan, to teach it a lesson for trying to pursue an independent foreign policy by sidestepping India concerns. Most Indians, say Sto­pdan, were jolted by the crisis that erupted in the summer of 2013 and put India’s “carefully nurtured and fostered” relations with Bhutan under great str­ain. The former diplomat stresses that over the years, the ‘sacred bond’ with Bhutan has been disastrously allowed to erode. The Himalayan state was merely an object of strategic play against China, where a carrot-and-stick appro­ach bec­a­me a major rule in India’s playbook. This approach was not sustainable; nor was it a sign of prudent foreign policy.

Historian Srinath Rag-h­a­van says that India’s approach to the Him­a­layan nations were based on both the policy it inh­erited from the British, as also by developments in China, especially after the takeover of Tibet by the Communists in 1950. While it continued to be wary of other major powers meddling in the region, India did champion democratic forces—for example, in Nepal, where it actively worked to strengthen democracy, and subsequently in Bhutan as well. How­ever, its attempt to keep China out, esp­ecially in the present context of Beijing’s attempt to establish direct diplomatic relations with Thimphu, may not be tenable for long. Bhutan is the only country in South Asia with which China does not have any diplomatic relations.

“India’s political and security interests, if they are to remain the same, can only be ensured if India helps initiate the change and cooperate actively with Bhutan to deal with the changing scenario,” stresses Raghavan.

As key members in the Indian establishment look for ways to avoid other Doklam-like situations in the future to effectively deal with an assertive China, they will also have to factor in new dev­elopments in the strategically important Himalayan region. For a start, India can learn not to cavil when countries like Bhutan decide to pursue an independent foreign policy.

A New Ring Of Catchers