Bounty At The Brunton

All the good things that the Raj left behind. 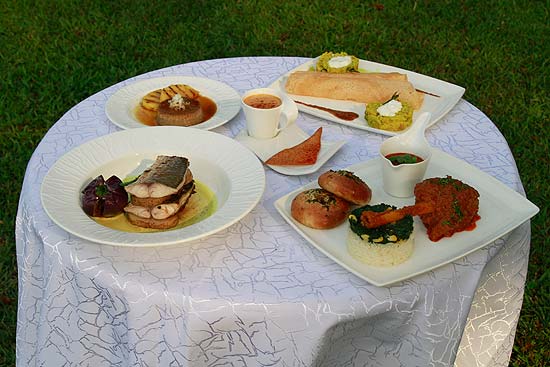 Brunton’s Boatyard, the iconic hotel on the waterfront at Fort Kochi, is made up of all the good things that the Raj left behind.

The chhota peg, for instance, the cloth punkahs hanging from the ceiling of the broad varnished wooden open corridor; the entrance circled with oil portraits of those men of fortune—the Jews, the Dutch, the Portuguese, the Scots and the native prin­ces who coexisted with them.

As you walk up the stairs to the History Restaurant (as this part of the Boatyard is called) you actually feel you are in a timber-roofed ship sailing out to sea. The diners are made up of people who could be the exact replicas of those downstairs. Except, of course, they have brought their ancient wives with them and seem to be wearing modern clothes.

At the History Restaurant you don’t just experience the past, you have it served on a plate. The chhota peg consists of a shot glass of ginger wine. You take small sips, while deciding whether to go Anglo-Indian, Syrian, Jewish, Dutch, Portuguese or Fish Moillee, plain and simple Kochi style.

“I am a traditionalist when making my dishes,” explains Chef Ajeeth Janardhan, “but a modernist when presenting them.”

His dishes remain true to his claim. We try the crab soup and that favourite of Anglo-Indian ladies who lived in hill-stations with small yapping dogs by their feet—the mince cutlet, or breaded croquette. It comes in a bullet shape in a pool of dark juices, with diced beetroot by the side. We try the main dishes consisting of a railway mutton curry. With its bone sticking out like a miniature cannon, it celebrates an army captain who went to the kitchen pantry in the train because he had scalded his mouth eating railway mutton curry and barked ‘Koi Hai?’ The train’s cook added a dash of coconut milk and the railway mutton curry marched its way into culinary history. The fish is a Jew town specialty. It sits encrusted with shallots on a platter with a fat purple aubergine like a Jewish mother by its side, brandishing a fried okra and fistful of potatoes.

When we step outside, the night seems spangled with flying fish. A street vendor is tossing fluorescent balls of coloured lights into the air and watching them trace patterns in the velvety darkness of a Kerala sky.