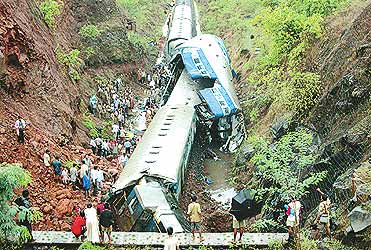 outlookindia.com
-0001-11-30T00:00:00+0553
Is rail travel safe? And is enough being done to ensure accident-free travel? Safety has become a growing concern among passengers, what with the spate of accidents in the last few months. Last week, the risk was further reinforced with yet another derailment. This time it was the Karwar-Mumbai holiday special that went off the tracks leaving 51 passengers dead and dozens seriously injured. The accident, attributed by rail authorities to "natural causes", happened when a boulder rolled on to the track in Maharashtra's Sindhudurg district.

While accidents like these are usually glossed over or passed off as human error, the latest tragedy on the Konkan Railway, one of the country's most modern rail networks, has caused more than a flutter. The reaction of the semi-autonomous Konkan Railway Corporation Limited (KRCL), which until now has had an accident-free record since coming into existence in 1990, was contrary to what Railways HQ in Delhi was putting out. "The derailment took place in an area regarded as non-vulnerable...so we had not done boulder netting. This accident was not supposed to happen," said Vaishali Patange, PRO, KRCL.

Meanwhile, KRCL managing director B. Rajaram was touting some home truths. According to him, about 200 kilometres of the rail route falls under an instability zone. The structures (where the derailment took place), thought to be stable by geologists and engineers, was actually highly unstable. "This type of disaster was unforeseen in conventional engineering wisdom. The KRCL will now use unconventional methods," Rajaram said. This includes modified anti-collision devices.

Such realisation, regrettably, has come late in the day. The Konkan Railway had initially blamed the locals, claiming safety nets installed to prevent boulders from falling on the tracks had been removed. They alleged that nets were stolen in the past. (Now there is also a move to replace existing nylon nets with safety nets reinforced with steel borders.)

The terrain, of course, is a factor. The Konkan route has 760 kilometres of rail (one track in some areas) running through some very difficult terrain—hills, ghats and soft soil connecting Maharashtra, Goa, Karnataka and Kerala. With 2,000 bridges and 92 tunnels, the project is one of the biggest and most challenging ones undertaken in the country.

In the aftermath of the mishap, buck passing continued unabated. Railway officials in Delhi even questioned the Konkan Railway thesis that boulders fell on the tracks. "How is it then that the engine passed on smoothly while the bogies were derailed?," questions one Railway Board official. According to him, they had been receiving reports of late about how the KRCL was cutting corners on passenger safety to maximise revenues. The report of the Railway Safety commissioner should be out soon and is expected to highlight what went wrong.

The latest derailment has brought the safety question back into focus. Since January this year, three major accidents have taken place, the others involving the Secunderabad-Manmad Express and the Mumbai-Amritsar Golden Temple Express. In between, there were more derailments—the Magadh Express near Buxar in Bihar in May and the Mathura-bound Gokul Express near Sonai in UP on June 13. June 23 was in fact a particularly bad day with two accidents happening—the Delhi-Malda Farakka Express derailed in Munger district, Bihar, and a goods train went off the tracks near Hapur station in UP.

Railway officials admit privately that accidents cannot be stopped, mostly because of the non-professional attitude of the rank and file. Also, maintenance standards have gone down over the years. In the white paper on Safety in Indian Railways, Union minister Nitish Kumar admitted he is helpless: "Safety costs the sky if one seeks absolute safety...the risks levels have to be brought down to zero, an impossible task in the transport sector."

The Railways has created a Rs 17,000 crore five-year non-lapsable special railway safety fund for modernisation of fixed infrastructure. A passenger now pays a safety surcharge ranging from Re 1 to Rs 100 depending on the class he travels in. The question is, what is he getting out of it? If the recent accidents are anything to go by, passenger safety needs far more attention than it is getting now.