The nemesis of many influential and lawless Americans, Preet Bharara writes about his absolute fealty to justice with passionate conviction 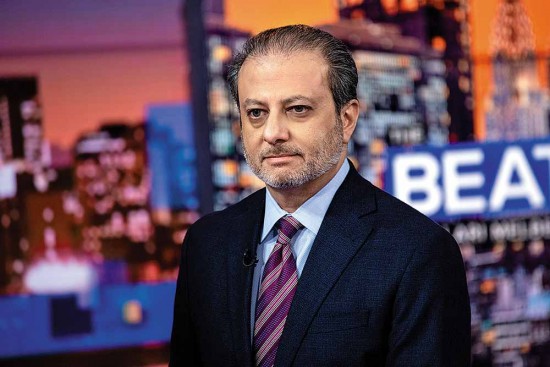 India-born Preet Bharara first shot into fame in 2009 when, within months of taking over as US Attorney for the New York Southern District, he decided to prosecute Raj Rajaratnam, the man­­ager of a seven-billion-dollar hedge fund, on securities-fraud cha­rges. In a press conference, Bharara claimed he had unearthed the biggest insider trading fraud in US history, which would serve as a “wake-up call for Wall Street”. In following years, Bharara prosecuted an impressive list of America’s powerful, till he was summarily fired by Donald Trump in 2017. He decided to wear his dismissal as a badge of honour, turn to academics and write the memoirs of his tenure as US Attorney to tell people how, for eight years, he was “doing justice”.

Bharara divides his book into four parts and, like an enthusiastic prosecutor, titles each of them on the various stages of a criminal case. Running into 323 pages, they are ‘Inquiry’, ‘Accu­sation’, ‘Judgment’ and ‘Punishment’. Each begins with an introduction, followed by various chapters through which runs a common thread of tho­ught—“law is an amazing tool, but it has limits. Good people, on the other hand, don’t have limits”. This is Bharara’s dominant thesis. To justify it, he writes about the wide variety of cases he handled as a US attorney and punctuates his stories with the perils faced by his office. Bharara prides himself in always having upheld prosecutorial ethics, applauds colleagues, expo­unds principles of criminal jurisprudence, questions judgments and bemoans acts of vengeance against religious minorities. In a chapter curiously titled ‘Bollywood’, he explains how he was accused of deliberately going after the Indian-American community to please his ‘white masters’. His justified anger is writ large as he details a 2013 case where an Indian diplomat was arrested by the state department for underpaying her domestic help. The arrest, he says, “caused an international incident” and, in India, “BJP…shrewdly seized upon this supposed Western insult to Indian sovereignty and caused a crisis for the Congress Party”. He laments how “an avalanche of vitriol and bile” descended on him just because he was Indian-born, even though he came to know of the case only a day before the arrest. Bharara defended his case, and perhaps because he was personally accused, defended it “loudly”.