Lit up by the artistic genius of Allah Baksh, enhanced by Bhalla’s brilliant exposition, this volume of miniatures of the Mewari Gita is a sight to behold 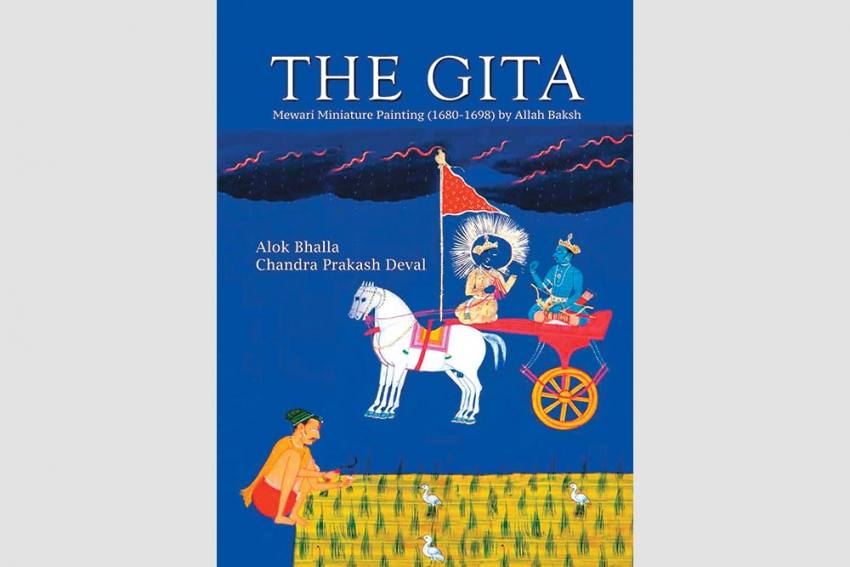 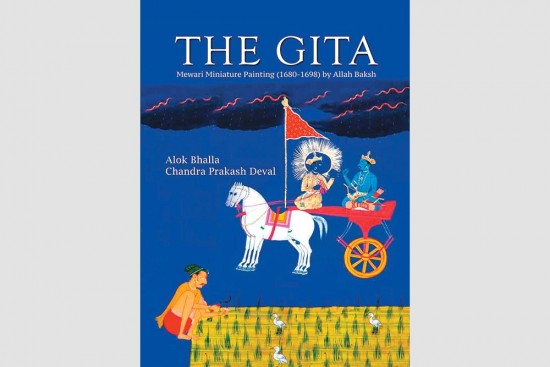 The Gita revealed in Mew­ari miniature painting by Allah Baksh is a prized legacy, with an inspiring commentary by Alok Bhalla, a cognoscente of art and literature. Rajasthani writer Chandra Pra­kash Deval has also made a valuable contribution by translating the Gita verses inscribed in Mew­ari on the painting folios into Hindi that directly echoes the reg­ional counterpart in its colloquialism and directness.

Only 500 of the 700 paintings that comprise the Gita folio have been conserved in the Gover­nment Museum of City Palace of Udaipur. The Gita paintings are part of a larger series of about 4,000 Mahabharata paintings commissioned by Maharana Jai­singh of Mewar. They are unique in Indian miniature art because they illustrate the entire philosophical text of the Bhagavad Gita. The extraordinary talent of Allah Baksh unfolds through his rich depiction of the abstract ideas that are an inherent part of this metaphysical poem. It is touching that Allah Baksh’s name appears only once in the entire folio and relating his humility, Alok Bhalla gives us a clue to what he considers to be the essential message of the Gita—the beauty and endurance of the human soul.

Bhalla’s interpretation of Baksh’s paintings—an illumination on the Gita verses—is a highly poetic proclamation of someone who puts himself in the shoes of Arjuna, who is despondent not because of lack of courage, but bec­ause he values humans. The Mewari Gita is a simple prose version of the original Sanskrit and is scripted in black ink on a yellow ochre band on the upper part of each painting. Bhalla remarks that the colloquialism of Mewari prose version establishes a space of intimacy, reassurance, and an ease in this dialogue between Arjuna, the man and Krishna, the god in his earthly guise. He does not rebuke Arjuna for his doubts, despair or confusion but patiently invites him to listen so he can help Arjuna to be firm in the mind.

Alok Bhalla records each painting with such passion that he almost becomes one with the artist’s consciousness and his creative imagination. No nuance of colour, no special turn of line, no imagery, no symbolism can escape his eye when he reads a painting. And, besides recording the illustration in words which exactly match the pictorial imagery, Bhalla offers a unique insight into the mystical song of the Gita by gently leaving aside heavyweight religious paraphernalia. In fact, such an aesthetic and humane perspective on Krishna’s song has not been attempted before.

It is best to quote Bhalla’s exposition of one painting as an example to reveal the sublime beauty of his words and that of the painting under his gaze. The famous verse 47 of Chapter 2, where Krishna tells Arjuna that human beings have the right only for action and not to the fruit of the action. Here is Bhalla’s description: “The sophistication of the painting complements the verse’s importance. At first, the dark background, relieved by blue and ochre bands, seems to dominate. Soon, one notices how crowded the painting is with rituals which Krishna has rejected because they are not disinterested acts. Three priests, dressed in gold, perform a traditional Vedic fire-ritual. One supplicant feeds the fire in a stone brazier with clarified butter, while the other two make sacrificial offerings of grain and seeds. Golden vessels near the fire catch the reflection of the red flames. Indeed, gold (and its sacred equivalents, ochre and vermilion) weaves a fine filigreed harmony through all the figures and objects in the dark space....”

Just as Allah Baksh contemplates on every verse of the Gita and illustrates in his paintings a reflection of life on earth with its secular diversity, Bhalla, through astute perception of his paintings, affirms that though the great war lurks behind, yet the earth’s forbearance, nature’s generosity, sky’s grace and the patience of trees and animals show man to find a way to live in a noble manner. Allah Baksh’s Gita, acc­ording to him, is “not merely an addition to an esoteric philosophic library; neither is it an advocate of man’s fearful surrender to an overpowering divinity; nor is it an endorsement of a warrior’s ethic. It is, instead, a call to a life wisely lived”. In all, the book is a rare piece of art, aesthetics, literature, philosophy and wisdom, and the rare collection of paintings that is included in the text is a gift that will be cherished for many generations.