Our Rashtra Mata In Heaven

Dasgupta expatiates on the great Hindu reawakening that lay at the roots of the freedom struggle. The Hindu right is thus seen through cultural nationalism. 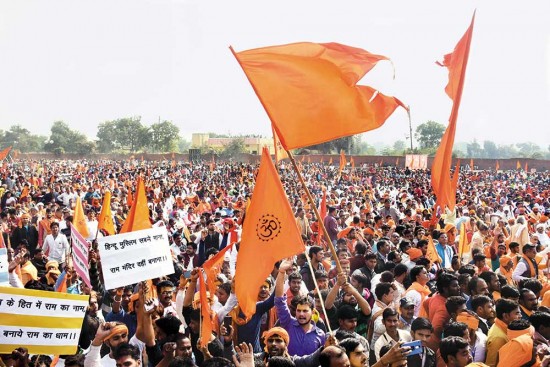 What the emergence of Narendra Modi in the political centrestage has done is to redefine Indian polity, and reclaim that core aspect of Indian nationhood which in many ways had inspired India’s global importance and identity in the last three centuries. From the fringes and sidelines to the mainstream, the growth of the Hindu nat­ionalist political movement has transformed and channelled Indian national discourse, making relevant the hitherto ignored or taboo strands of the Indian freedom movement.

India was awaking from a thousand years of slumber, as Swami Vivekananda had observed in the late nineteenth century. In fact, it is not an exaggeration to say that Swami Vivekananda was the fat­her of modern Indian renaissance. The freedom moment gradually came to focus on the immediate aspect of throwing out the British. But it simultaneously triggered an unresolved national churning in India after the British left. The Congress under Jawaharlal Nehru got the first chance to shape India after 1947. But the teachings and aspirations of an awakened India, as scripted by Vivekananda, Bal Gangadhar Tilak, Lala Lajpat Rai, Ban­kim­­chandra Chattopadhyay, Sri Auro­­bi­ndo, Veer Savarkar, Keshav Bali­ram Hedgewar, Guru Golwalkar, Syama Pra­sad Mookerjee and Sardar Patel did not find political expression till the eighties in a decisive manner. Swapan writes “I bel­ieve it is important to understand the phenomenon not only from the perspective of its critics but also in terms of how it perceives itself. There has, for example, been an accusation that Hindu nationalism is singularly detached from the freedom struggle”.  Cultural nationalism—that undeniable spur to the freedom struggle--was the base of this alternative political philosophy which Swapan Dasgupta in his new book has chosen to call “the Indian Right”.