In this excerpt from his new book, Manu S. Pillai recounts how the British, through deceit and ill will, tried to unseat the ruler of Baroda. When their plot was picked apart by the maharaja’s British lawyer, they fell back on outright racism to have their way.

On the morning of November 9, 1874, an Englishman called Robert Phayre suddenly felt an attack of nausea in princely Baroda. The middle-aged Colonel Phayre was British Resident at the Maratha court here and had been somewhat under the weather for several days prior. That morning, though, was different. He had, as usual, returned from his walk and taken a few sips of the pummelo sherbet his servants always kept ready. Sitting down to write a letter, however, a ‘sudden squeamishness’ possessed him. Deciding it was the juice, he threw out the rest, only to notice something odd. ‘As I was replacing the tumbler on the washhand stand,’ Phayre recalled, ‘I saw a dark sediment collected at the bottom.’ Holding it closer to the eye, ‘the thought occurred at once to my mind that it was poison’. He sent off the substance for analysis, and telegrammed his superiors: ‘Bold attempt to poison me this day has been providentially frustrated.’ Interestin­gly, despite the gravity of the claim, when the local maharajah came to see him hours later, the Resident kept mum; it was days before the incident was broached, news having reached the palace through other channels. In his official commiseration, the ruler expressed horror at this plot by ‘some bad man’ to liquidate the Resident. ‘If it becomes necessary for you to obtain my assistance in proving the criminal’s guilt,’ the maharajah offered, ‘the same will be given.’

Unfortunately for Malhar Rao Gaekwad of Baroda (1831–82), in Phayre’s mind the ‘criminal’ was none other than the maharajah himself. Ever since his arrival in the principality, the colonel had found himself unable to get along with its ruler. Neither was, to be fair, a particularly placatory type. Described as an ‘overbearing, irascible British official . . . dreaded and detested by all Indians’, Phayre had left his last posting in a muddle. The maharajah, meanwhile, was textbook dubious. A little over a decade ago, when his brother sat on the throne, he was locked up for conspiring to murder him. His sibling’s death, however, res­tored Malhar Rao to liberty, and succeeding to power, he showed ‘a most sweeping and vindictive character’. The minister who had investigated the murder conspiracy, for example, was left to rot in prison, where he died mysteriously. So, too, Malhar Rao developed a habit of seizing women he liked and forcing them into palace service: as The Hitechhu reported, girls were ‘taken like pigeons’ and subjected to ‘filthy violations’. Then there was the matter of his newest wife, ‘Luxmeebaee’, who was first the ruler’s mistress, marrying him while alre­ady pregnant; when the maharajah expressed a desire to proclaim his son by her as heir, Phayre demurred. Furious, Malhar Rao apparently issued orders that anybody who did not refer to his wife as the ‘Chotee Rani’ (junior queen) was liable for a fine of fifteen rupees. Baroda was a case study in what the British deemed misgovernment. Residents ventured the occasional menacing ‘advice’ but wrote much of this off as typical oriental conduct.

It was in this disturbed context, then, that Phayre discovered diamond dust and arsenic in his sherbet that November morning in 1874. And from his perspective, there was reason to suspect the ruler. On the one hand was the maharajah’s continued umbrage at the delay in recognising his son as heir to the throne. British inquiries revealed that the baby’s mother was once ‘employed as a cooly [sic] in Surat’ before she was taken to the palace; but though she was of inferior caste and pregnant at the time of her wedding, given that Malhar Rao had acknowledged the child as his, there was no way to withhold recognition. Then there was political animosity. A week before the poisoning, on the same day that the maharajah fired off a volley of complaints against the Resident to the viceroy, the latter too submitted a 174-point ‘progress report’ that showed Baroda as doomed. 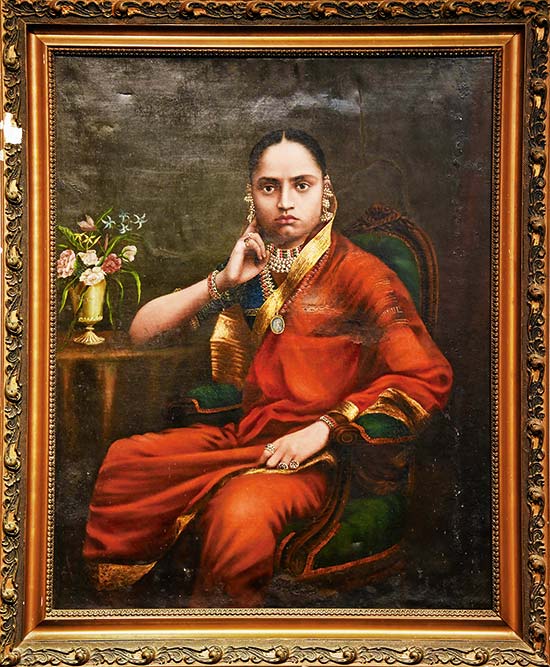 A portrait of Maharani Jamnabai, the widow of Maharaja Khanderao Gaekwad, the brother of Malhar Rao

After seeking legal opinion in Bombay and Calcutta, then, the viceroy decided there was a prima facie case against Malhar Rao. From here on, things moved fast. By January 1875, troops were landed, the maharajah was placed under house arrest, and the government  was assumed by the Raj. Though Malhar Rao, by the viceroy’s own acknowledgement, had not had a chance to put up a defence, examine witnesses or explain his version, the British opted to pre-emptively seize power till he was cleared. ‘This action,’ the viceroy explained, ‘was not based on considerations of law. It was an act of State, carried out by the Paramount Power.’ Elements in the press too had paved the way for this. As an editor put it, ‘The only way to clear the Vessel of Baroda is, to throw over-board its cargo of Rogues.’

But trying a maharajah was no easy business: he could not be dragged before a British court, nor was a public inquiry fitted to his dignity. Still, in the end, an inquiry was less embarrassing. Notwithstanding Malhar Rao’s reputation, this too, in native circles, caused protests—insulting one of the country’s princes was seen as an assault on Indians as a people. Did this dangerous precedent mean, additionally, that other thrones too were not secure? Among the general public agitation grew; it was, we read, ‘not limited to processions to the temples and prayers’ but also ‘modernised by the educated natives into the form of public meetings and memorials to’ the viceroy. In Poona, thus, the Sarvajanik Sabha called for a fundraising campaign for the ruler’s defence. Under pressure, therefore, the British were forced into a ‘gesture of equality’: of six commissioners chosen for the inquiry, three were Indians: the Maratha king of Gwalior, the Jaipur maharajah and Sir Dinkar Rao, north India’s leading statesman. In the meantime, Malhar Rao too, hoping to fight fire with fire, imported the British barrister William Ballantine to argue his case. The choice was strategic, for, as Judith Rowbotham tells, while this genius was a spectacular misogynist, the one thing he was not, by contemporary standards, was a racist. Ballantine, who till then had had no idea even of Baroda’s existence, decided to do what he did best—try and win. For he, too, was aware that this was more than just a court battle. The contest, it seemed, was between nat­ive prestige and British supremacy.

On February 23, 1875 proceedings opened in Baroda. To begin with, the language chosen was English, which put not only the maharajah but also Dinkar Rao at a disadvantage, as neither spoke it with ease. Bombay’s advocate-general presented the case against Malhar Rao: his bribery of Residency employees, the poisoning of November as merely the last in a series of attempts and the confession of even the royal secretary. But Ballantine proved a formidable cross-examiner. The servant who had served the pummelo juice, for instance, despite claiming to have been bribed, had not actually received any money. When grilled, the man mumbled that since he had failed at the task of murdering Phayre, his conscience did not allow him to accept remuneration. More stinging was the barrister’s attack on Phayre. Days after doctors generically confirmed that the sediment in his tumbler was poison, Phayre cited ‘secret and confidential’ information specifying it as ‘1. Common arsenic; 2. Finely powdered diamond dust; 3. Copper’. This was linked to an alleged purchase of diamonds by Malhar Rao, thus connecting the substance to the prince. But Ballantine was curious: from whom had Phayre received such precise intelligence? Here Phayre stumbled. Vaguely stating that he had very many sources, he claimed he could not recall ‘which particular person’ conveyed these details. Smelling blood, Ballantine wondered how on such a grave matter Phayre had forgotten the origin of critical information. When after sustained cross-examination a name was at last revealed, it happened to be that of one Bhau Punekar, ‘notoriously the bitterest enemy of the Gaekwar . . . who had been for years fostering charges against him’. Who, demanded Malhar Rao’s lawyer then, was to say that it was not Punekar himself who had framed the ruler? After all, given their mutual hatred of the maharajah, Punekar enj­oyed ‘complete access’ to the Resident and, conveniently, happened to also be present that fateful morning. Could he have added the poison to Phayre’s drink? Moreover, the man from whom the diamonds were allegedly purchased by the maharajah also declared that he was coerced into stating so. Why, even the ruler’s secretary who had confessed did so after having been kept under arrest, and then given a deal. One by one, flaws began to appear in the prosecution’s evidence, with the press adding to the shame. The Daily Telegraph wrote, for instance, how ‘the meanest pickpocket would not be convicted on the evidence upon which it was sought to deprive a Sovereign of his throne’. Even The Times of India, as pro-British a paper as could be, thought the evidence ‘worthless’. The British commissioners, however, ignored these inconvenient revelations. After all, it was common sense that natives were ‘instinctively untruthful’ and ‘incompetent witnesses’, so small quibbles were not allowed to get in the way. The whole trial was fast becoming a farce that said more about the hold of racial stereotypes than cool and calm modern justice.

On March 17, 1875 public proceedings closed. Soon after, the viceroy informed London that while the white commissioners found the maharajah guilty, their brown colleagues felt the opposite—poisoning was indeed attempted, but Malhar Rao had not convincingly been linked to it. It was here, finally, that British duplicity discarded its lofty veneer. For, while the natives were theoretically equal members on the commission, their English peers alone guided the government. The maharajah’s ‘previous character’ left no doubt, as far as the Raj was concerned, that he was guilty. To restore him to the throne would be a ‘miscarriage of justice’, besides also being ‘a fatal political error’ that could ‘seriously weaken the authority of the British Government’. In fact, it was baldly admitted that ‘we did not consider that the circumstance of an equal division of opinion rendered it obligatory upon the Government of India to give the accused party the benefit of the doubt’. London, however, still had a fraction of ethical concern left. They agreed that the maharajah had to be deposed because he was a confirmed disaster, but his removal was to be ‘upon general grounds’ and not his all­eged culpability in the crime. And so it was that in the viceroy’s order of April 19, Malhar Rao and his son by that ‘cooly’ wife—to kill two birds with one stone—were stripped of claims to the throne, due to the father’s ‘gross misgovernment’, his ‘incapacity to carry into effect the necessary reforms’ and—in what was a convenient trump card—for the ‘interests of the people of Baroda’.

It was three days after the orders arrived that Malhar Rao was informed of his fate. ‘His Highness,’ we read, ‘wept and entreated, but fin­ally submitted.’ On a special train, he was bundled away in the dead of the night to Madras, where he was to spend the rest of his days.