How The West Was Lost 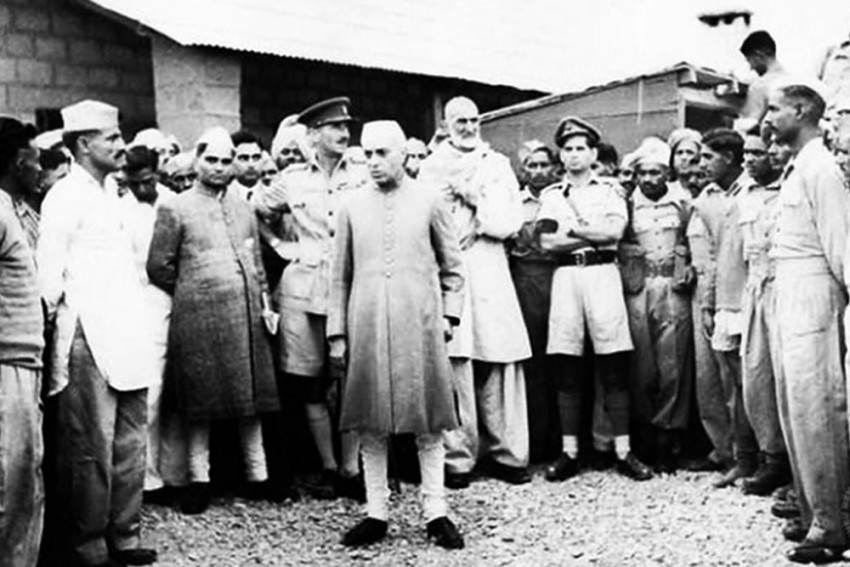 Pandit Nehru with Badshah Khan and others during his ill-fated NWFP trip in 1946
Shakti Sinha October 02, 2019 00:00 IST How The West Was Lost 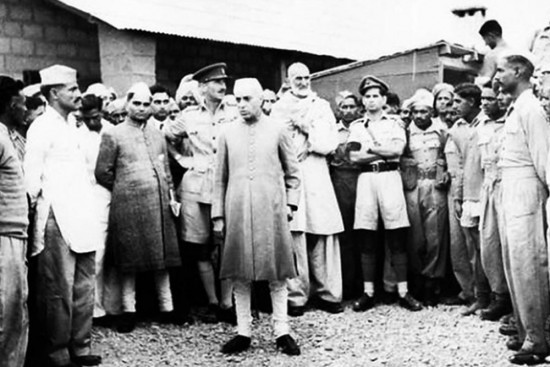 The story of the Partition of India never seems to go away. Just when you think that the last word has been written, lost opportunities rued and villains identified, comes along a new book. Not all books add to the substantial body of knowledge that exists or introduce insights that set scholars thinking. Raghvendra Singh’s India's Lost Frontier: The Story of the North-West Frontier of Pakistan attempts to do this. Most books on Partition look at roles of different actors, actions that made Partition inevitable, the avoidable mistakes of key players that facilitated communal division, specific inci­tements to violence that would provoke ferocious reactions.

So why another book, I asked myself as I picked this up. However, after reading it carefully, I was convinced that this was a story that needed to be told, and it’s told here competently. This is not to suggest that the book is flawless in both content and presentation. But more of that later. The question to ask is what makes this book different and therefore readable.

The story of the Partition of Punjab and Bengal and its horrendous, attendant vio­lence is seeped into our collective consciousness. The Partition Museum at Amritsar brings out the human element powerfully, though a similar effort for Bengal is missing. Two scholarly works in the last decade that questioned conventional narratives were by Venkat Dhuli­pala (Creating a New Medina: State Power, Islam and the Quest for Pakistan in Late Colonial North India) and Ishtiaq Ahmed (The Punjab Bloodied, Partitioned and Cleansed). The first exposed the myth that the demand for Pakistan was just a bargaining plea, that Jinnah just wanted a better deal for Muslims of India and the Congress mishandled it. Ahmed’s book is the first to look at a province in such great detail, using eyewitness accounts and off­icial records to show how ethnic cleansing was done with such efficient ruthlessness.

India’s Lost Frontier does a yeoman’s service by looking at the developments in the North-West Frontier Province (NWFP, now Khyber Pakhtunkhwa province of Pakistan) in detail. This he does by first giving a chronological sequ­ence of events in the crucial 1946-47 per­iod. In fact, Singh’s historical account begins from Alexander’s incursions, following it up with the Mauryas, Ghenghis Khan, Timur Lang, the Mughals, Nadir Shah’s invasion, Ahmad Shah Abdali, the rise of the British Raj, their ill-fated att­empts to directly rule Afghanistan to the rise of the modern Afghan State under Amir Abdul Rehman (1880-1901), the ceding of Afghan territory to the British after the Second Afghan War, to the forcible displacement of the Taliban in 2001 and its subsequent regrouping. It is not often realised that there are more Pashtuns (or Pakhtuns) in Pakistan than in Afghanistan, and that Karachi and Peshawar have more Pashtun residents than Kabul.

The origins of the chaos that the British, with Jinnah, created in NWFP goes back to the ceding of areas by Amir Abdul Rehman to the Raj under the Treaty of Gandamak.

The origins of the chaos and violence that the British, with help from Jinnah, created in the NWFP in 1946-47 go back to the many deals that the Raj and Amir Abdul Rehman entered into over the 1879-1893 period, culminating in the agreement that established the 2,600-kilo­metre ‘border’ between the two. Sir Mortimer Durand was the foreign secretary of the British Raj who signed the agreement with the Amir. Singh rai­ses the key issues whether Abdul Rehman negotiated the deal under duress and whether the Durand Line was, in fact, meant to be a border at all? Amir Abdul Rehman was politically weak, trying to consolidate his rule bolstered by British subsidies and the supply of arms. He came to occupy the throne after formally ceding Quetta, Pishin, Sibi, Khurran and Khyber, traditional Pashtun areas, to the British under the Treaty of Gandamak. Later he was to concede much more. In one way, Ranjit Singh and his general Hari Singh Nalwa, had shown the way by marching on to Kabul and seizing and retaining control of the Afghan summer capital of Peshawar and other Pashtun areas. As the author establishes convincingly, what both sides were doing was est­ablishing a broad border ‘region’ where the British had hegemony but not sovereignty. The Afghan state kept up its annual payment of subsidies to the ‘maliks’, traditional elders of sub-clans.

The frontier had two regions, differen­tly administered. The first was the ‘settled’ areas which became NWFP. The other, detached from it, were the ‘tribal’ areas or ‘agencies’, which later evolved into the seven Federally Administered Tribal Areas (FATA) of Khyber, Khur­ram, Ora­kzai, Bajaur, Momand, and the two Waz­iristans (North and South). The normal laws of British India, like the Criminal Procedure Code, penal laws and administrative laws (municipal, land management etc) were not applied to these areas. Instead, even after the progressive extension of suffrage to all citizens of Pakistan, the rights of citizenship were denied to its residents. Instead, the representative of the crown (later of Pakistan), known as the political agent, exercised powers of life and death, including imposing group fines for individual transgression. Even the right of judicial remedy was denied. These tribal agencies formed the first line of defence, acting as buffer to its Indian empire, was part of the Raj’s policy in countering the Russian threat towards India during the Great Game.

The Muslim League failed to make any headway in the NWFP. The contrived fear of Hindu domination putting Mus­l­ims at threat had little purchase in Bengal, Punjab, Sindh or the NWFP. Thanks to the efforts of Khan Abdul Ghaffar Khan, popularly known as Bachha (Badshah) Khan and his non-vio­lent movement of Khudai Khid­matgars, the Congress not only bested the Muslim League in the 1946 elections, but actually won more Muslim seats than in the 1937 elections and formed a majority government under Khan Saheb, Badshah Khan’s elder brother. The British, having decided on Partition, now got into the act and wor­ked to man­oeuvre the situation to Pakistan’s adv­antage. Unfortunately, the Congress leadership played into the hands of the British and Jinnah.

Wanting to dismiss the Congress ministry in the NWFP, the British devised a referendum for the Pashtuns—a bid to retain leverage here to service the US in the Cold War.

As part of the transition to Indepen­dence, an interim government had been formed at the Centre, with Nehru as the member for foreign affairs. His portfolio included the tribal areas. Overruling the British governor of the province, Olaf Carole, Nehru decided to tour these areas with Dr Khan Bahadur and Badshah Khan. Carole objected to the political nature of the trip, forgetting that the int­erim government was itself political. Officials of the Raj, mostly Muslims, wor­ked with Muslim League sympathisers in some of the agencies to attack Nehru’s convoy at different pla­ces, block roads and fire upon it. The idea was to show that the Congress had lost ground.

This was true to some extent, as the eff­ects of Jinnah’s Direct Action Day in Calcutta on August 16, 1946, which commenced with League wor­kers launching horrific communal riots. In a backlash, riots spread to Bihar and elsewhere, furthering the communal divide. NWFP could not remain immune to it.

As Singh shows, the efforts of the Raj now shifted to getting the Khan Saheb ministry somehow dismissed, though it retained its majority in the provincial ass­embly. Treating a Congress ministry in an overwhelming Muslim majority state as an anomaly, the Raj then devised the need for a referendum to asc­ertain Pash­t­­uns’ wishes. The Muslim League had contes­ted the 1946 elections on the sole platform of Pakistan—it won only 17 of the 39 Mus­­lim seats; the Cong­ress won 19 Mus­lim seats and with other general seats had a comfortable majority. In the referendum, the popular choices of an independent Pashtunistan or merger with Afghanistan was not on the cards; the only options were India or Pakistan. The Khan brothers’ plea that if the two wings of Pakistan could be separated by a 1,000-plus km of India, NWFP should rem­­ain a part of India, found no takers. Surprisingly, Nehru went along with this distortion of first agreeing to a referendum and then disallowing the choice of freedom to an area whose inclusion wit­hin India was legally dubious, with the British even conceding that the Afghan state had a stake in these areas. The Con­gress boycotted the referendum, recog­n­ising that the pitch had been tilted against them. NWFP voted to join Pak­is­tan. Why did the British want this outcome? The Cold War had commenced and a weakened Britain wanted to retain leverage in the soft under-belly of the Soviet Union to offer to their American allies, so as to ret­ain their utility. They succeeded brilliantly, even if the human costs the Pashtuns continue to pay is staggering.

The story is not over yet, as Pakistan has denied some of its residents full citizenship rights. Though FATA agencies have been merged with Khyber Pakhtunkhwa and has elected MPs, two of them are in detention for protesting forced disappea­rances and the use of force by the army. The non-violent Pashtun movement, the Pashteen Tahaffuz Movement (PTM), has shaken the foundations of Pakistani rule, proving right what the 16th century Pashto poet, Kaushal Khan Khattar, had war­ned—that an undigested bone swal­lowed whole could hurt the stomach.

The book could have done with better editing. Since the story is told through the lens of different individuals, there is avoidable repetition, and even contradiction. Some of the footnotes give biographical details of important act­ors who have already been mentioned extensively. It also seems that the chapters have been written separately. These are some shortcomings that mar this very readable, insightful book.

It’s a must-read for anybody wanting to know why India does not border Afghanistan. Hopefully, it would inspire more scholars to look at local histories, not just grand narratives.

From Roar To A Mew, Will Mamata Banerjee's Tactics To Guard Trinamool's Dark Secrets Work?