Most of the criticism of EVMs appears to stem from a knee-jerk mistrust of technology. The authors have studied and analysed EVMs across India first-hand for years, ever since they were first introduced; and feel completely confident that they are tamper- and hack-proof, and cite their reasons for it. 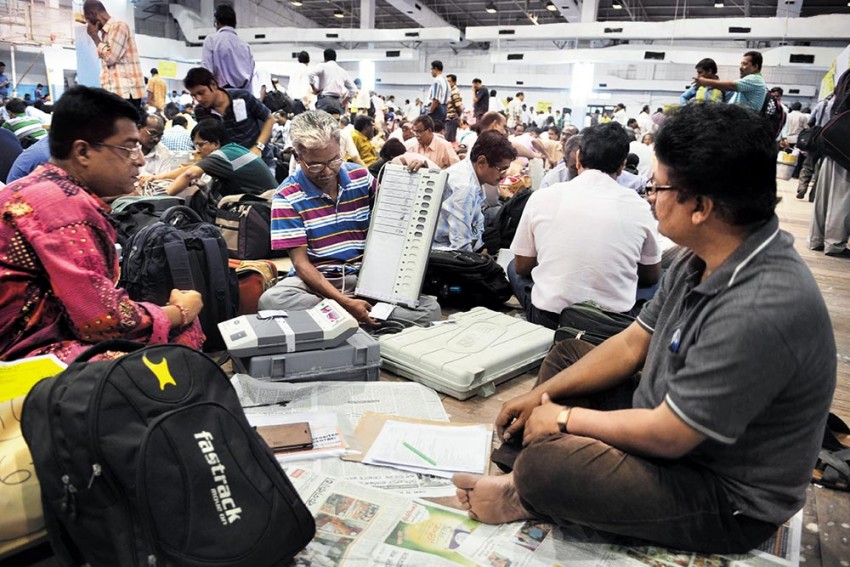 Before D-Day
Officials readying EVMs and other material before an election in Calcutta
Photograph by Getty Images
Prannoy Roy and Dorab Sopariwala March 07, 2019 00:00 IST 'EVMs Are Tamper, Hack-Proof': Exclusive Extracts From 'THE VERDICT' By Prannoy Roy 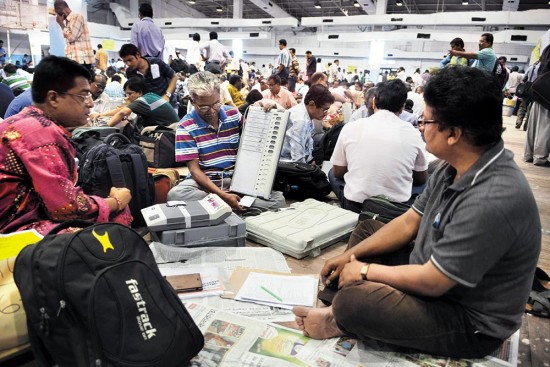 India’s pioneering psephologists Dr Prannoy Roy and Dorab R. Sopariwala provide some revelations in their latest book, The Verdict, and say that EVMs have put an end to booth-capturing,  are hack and tamper-proof and give reasons for their belief.

We are now firmly in the era of India’s innovative electronic voting machines (EVMs). First introduced way back in 1982 and 1983 as a test, they are now used universally in Indian elections.

India’s electronic voting machines are unique—and ideal for Indian voting conditions. First, and most impo­rtant, Indian EVMs are not connected to the internet or to any wider cloud or network. They are stand-alone machines that have no Wi-Fi or Bluetooth capabilities. (This is a major difference between India’s EVMs and those voting booths in the USA that have electronic voting, where connection to the internet can leave them vulnerable to hacking). To cast a vote in an Indian EVM simply means pressing a button—there is, of course, one button against each candidate, name and party symbol—and the votes cast are stored inside each EVM. Party symbols are used rather than party names, to take acco­unt of illiteracy.

The only way to access the number of votes stored in each EVM is to break open the seal which keeps each EVM secure. The seal can only be broken by an Election Commission official in the presence of representatives of all the candidates—and with all parties looking on, hawk-eyed. If any EVM’s seal is found already broken, the Election Commission announces repolling in the relevant polling booths. In any case, it is virtually impossible to secretly break the seal of any EVM, as every move an EVM makes, from being set up in a polling station on voting day, through to being transported at the end of voting into a locked room, and then to finally being moved to the counting centre only on counting day, is watched and the process guarded by representatives of all parties.

There has been a great deal of criticism of EVMs—inevitably from the party (or parties) that has (or have) lost an election. Most of the criticism of EVMs appears to stem from a knee-jerk mistrust of technology.

Distrust of voting systems happens all over the world. In the 2016 British referendum on leaving the European Union, for instance, campaigners for ‘Leave Europe’ expected to lose in the contest by paper ballot. So in the run-up to polling day, they promoted the widespread conspiracy theory that pencils were being handed out at polling stations so that millions of votes could be erased by the government, and for that reason, they promoted the hashtag ‘#UsePens’ on social media, encouraging voters to bring their own pens to stop their vote from being erased. This was, of course, ridiculous. And when the ‘Leave’ campaign unexpectedly won, nothing more was said about ‘#UsePens’.

The authors have studied and analysed EVMs across India first-hand for years, ever since they were first introduced; and we feel completely confident that they are tamper- and hack-proof, for the following reasons:

So why can’t the same thing happen with EVMs? Couldn’t gangs use strong-arm methods to capture them as well, and just keep pressing their party’s button on the machine, before going on to the next polling station? After all, surely pressing buttons is even easier than stamping ballot pap­e­­rs? The reason to be sceptical is that each EVM can record a button being pressed only after every twelve seconds. If buttons are pressed more often, the EVM will not register any vote. In any booth-capture situation, it would take nearly three-and-a-half hours to press the buttons 1,000 times (the typical number of votes for any EVM), and even that assumes the buttons would be pressed rapidly, every twelve seconds exactly. EVMs are simply not a feasible or efficient way of carrying out electoral fraud.

EVMs are also more environment-­friendly—they have saved almost a quarter of a million trees from being cut down for the paper needed for ballots in recent Lok Sabha elections, not to mention state assembly and other elections. A rough estimate of the number of trees that have been cut down for Lok Sabha elections alone between 1952 and 1998 (when EVMs began to be widely used) totals about a million. It would have got worse beca­use for every Lok Sabha election today, about a billion ballot papers would need to be cut, printed and kept ready.

The original EVMs did not need any paper at all. However, because of the constant clamour against EVMs, mainly by the losing parties, the Election Commission was forced to make alterat­ions to the EVMs, despite their already being secure. The Election Commission introduced a ‘paper trail’ for every button pressed and vote cast: a ‘touch and feel’ analogue evidence of exactly the same digital event. Every EVM now has a second machine atta­ched which is effectively a printer. Except, this printer (called by the awful name VVPAT, which stands for Voter-Verified Paper Audit Trail) is sealed, and has a small window behind which a slip of paper passes for ten seconds, before it falls into a sealed container at the base of the VVPAT (printer).

The small glass window is at the front of the VVPAT, through which voters can ‘see’ the party that they have just voted for, as a confirmation that the EVM has recorded their vote correctly. The nearly billion slips of paper thus generated are seldom, if ever, looked at—o­­­nly when there’s a dispute is the sealed printer opened and the slips counted.

While the VVPATs have lessened the relentless attack on EVMs, blaming them for an election loss is, unfortunately, still par for the course. As a consequence of the barrage of such att­acks at press conferences and across the media, there is sadly little doubt that the voters’ trust in EVMs has suffered, for the wrong reasons.

In conclusion, we believe that EVMs have been and still are one of the finest innovations for Indian elections. In fact, perhaps demo­cracies all across the world could learn some lessons from Indian EVMs: their remoteness from the internet to prevent tampering and their ease of use for illiterate voters are major advantages. If the USA had adopted Indian EVMs, they would have come a long way from ‘pregnant chads’ and ‘hanging chads’—and who knows, Al Gore may have been president!

Specifically, in India’s context, the end of the old scourge of booth-capturing is one of the greatest developments in the maturing of Indian democracy. Unfortunately, it cannot be attributed to an improvement in law and order, or to there being fewer strong-arm tactics used today. Instead, booth-capturing ended primarily because of EVMs. We have no hesitation in concluding that India should not only trust EVMs but should be proud of the innovation and the digital design.

Should opinion polls be trusted?

There are likely to be over 100 polls of different types and sizes in the run-up to the 2019 Lok Sabha elections. Should their forecasts be trusted? The evidence of opinion polling in India, 833 polls over the last forty years, suggests that we should trust our polls, at least most of them. The record shows that most polls get the winner right but are often way off the mark when it comes to forecasting the exact number of seats.

In fact, with the exception of one outlier election, polls have got an impressive 97 per cent strike rate in predicting the winner for Lok Sabha elections. The one time every single poll got its forecast wrong was in the ‘India Shining’ election in 2004 when they said Atal Behari Vajpayee would be re-elected as prime minister and he lost.

A corollary to the end of the pure anti-incumbency era is that in the current fifty:fifty phase of our democracy, the voter has a message for all elected governments: perform or perish.

The voters’ yardstick for ‘performance’ is whether economic growth translates into genuine development on the ground, in their lives and their constituencies.

So elections today are not won simply by flamboyance. The most successful chief ministers over the last twenty years, with high re-election rates, have been low-key, result-oriented leaders like Shivraj Chouhan, Naveen Patnaik, Raman Singh, Manik Sarkar and Sheila Dikshit. All at least three-time winners. Oratory also works as long as it is combined with development as in the case of Narendra Modi when he was chief minister of Gujarat.

In India, Women Are A Distinct And Independent Vote Bank: Exclusive Extract from 'THE VERDICT' by Prannoy Roy