Bonds Behind The Veil 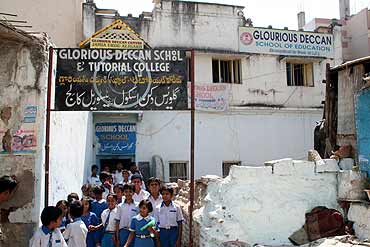 outlookindia.com
-0001-11-30T00:00:00+0553
It was in the bylanes of Dabeerpura, in Hyderabad’s old city, that Rehana Sultana nursed the dream of educating women in her area and helping them become economically independent. Head of the department of women’s education, Maulana Azad National Urdu University, she has been taking up the cudgels against unfair talaqs, contract marriages and fighting for the Muslim girl child’s right to education.

A law graduate, Rehana set up the Glorious Deccan School in Dabeerpura in the ’80s. Her motive was to ensure no girl child in the area dropped out of school. "I noticed several girls drop out because their mothers are not educated." To bring the mothers into the fold, Rehana also began adult education classes. The idea worked. Today, out of a total of 400 students, some 300 are girls. Besides, batches of 80-odd women attend adult education classes. And for girls who cannot afford education, Rehana gets her NRI friends and philanthropists to help.

Her drive against contract marriages of minor Muslim girls with Arab sheikhs began in 1997 with the case of 14-year-old Massarath Sultana. Massarath was married to three sheikhs in three months. When her father forced her to marry the fourth time, she approached the local police. But the cops refused to file a case. That was when Rehana stepped in. Her sources ferreted out the qazi and broker responsible for the ‘marriages’ and she got a DCP to file a case. She later sponsored Massarath’s education till 2002.

Rehana also offers legal counselling in cases of dowry harassment, divorce and child custody. She talks of a Muslim mother losing the custody of her 9-year-old girl simply because she remarried after her husband deserted her. "To the court, it does not matter that the father too has remarried. And how can a 9-year-old suddenly be deported to a father she has never seen? This is not justice," says Rehana.

A discerning change is evident in the area—more girls want to pursue higher education. "What’s more heartening is to see mothers taking their girls to hospitals or banks and ensuring equal rights for their daughters," says she. To an outsider, the dingy lanes of the old city might look the same as a decade ago, but to Rehana it has changed. When a 16-year-old student Sameena says she will be pursuing an engineering degree despite her parents’ wishes to marry her off, Rehana knows her efforts have paid off.