Indian boxers are a sight to behold in the Women’s World Championships. These four will go the farthest. 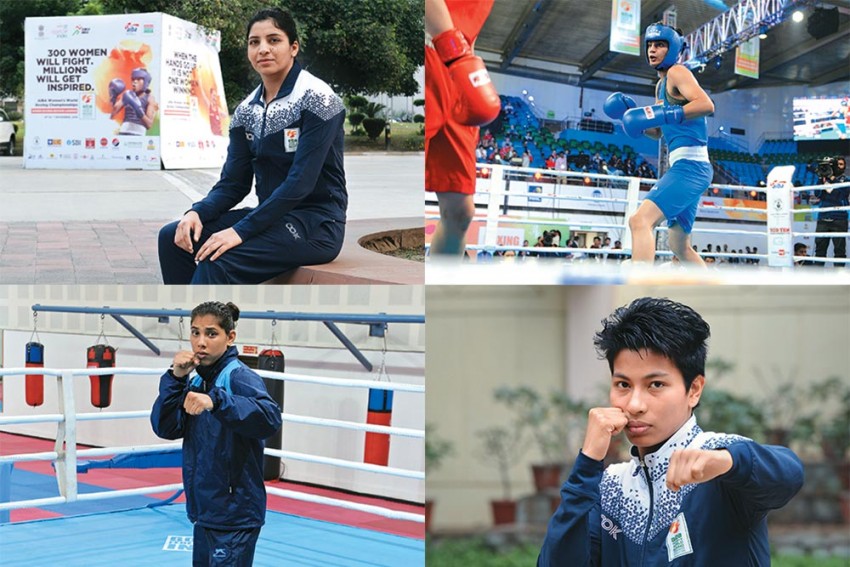 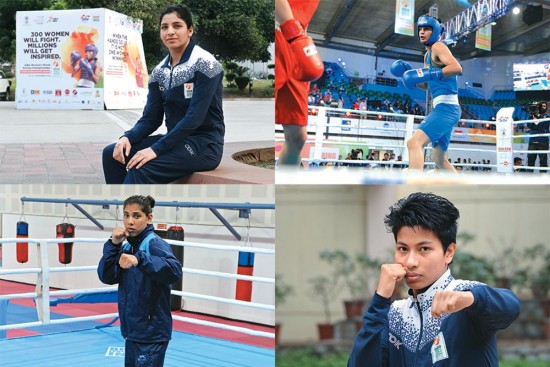 The ascent of Indian women to the topmost echelons of world spo­­rts as potent threats to the old elite—stealing a medal here, causing an upset there, the occasional world record—is pow­­­ered as much by boxing as any other sport. This was borne out at the ongoing AIBA Women’s World Championships in New Delhi (Nov 15-24), where eight of the 10 Indian boxers, including the totemic M.C. Mary Kom, punched their way to the upper reaches of the tournament. That shows the class of Indians in the ring. Four of the eight pugilists stand out and have a bright fut­ure: Simranjit Kaur Baath (light welterweight, 64kg), Sonia Chahal (featherweight, 57kg), Man­­i­­sha Moun (bantamweight, 54kg), and Lovlina Bor­­gohain (welterweight, 69kg). The fearless foursome pack a mean punch.

A common thread  running through them is that all four come from villages—of Punjab, Haryana and Assam—where facilities are grossly inadequate. But they are resilient and bloody-minded in their pursuit of excellence. Even as they make a mark in New Delhi, they have an appr­oaching target: the 2020 Oly­mpic Games. A few of them will soon cha­­nge their weight categories in an effort to qualify for the Olympics, as competition in Tokyo will be held only in five categories.

A total of 277 boxers from 62 nations are competing in ten weight categories at the K.D. Jadhav Indoor Hall inside Indira Gan­­dhi Stadium. Apart from Mary Kom, stalwarts like Mira Potkonen of Finland and Thailand’s Peamwilai Laopeam are among the other well-known boxers competing for ultimate glory. 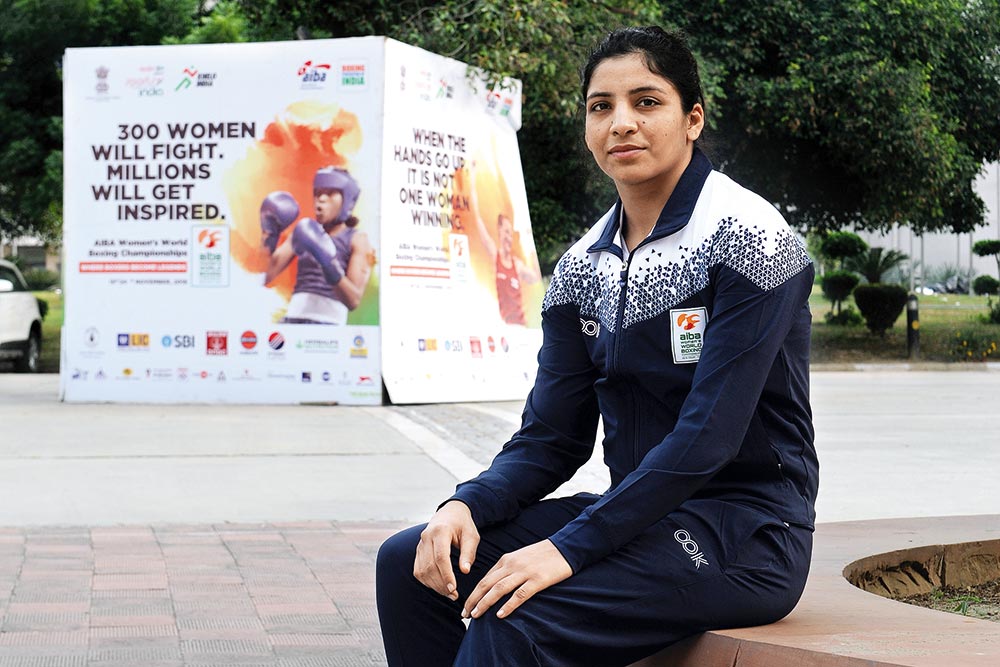 She is an expert at skills that are poles apart--drawing and boxing. Had she not excelled as a boxer, Simranjit would have probably made a name as an artist. She has been fond of coloured pencils since childhood, and now uses black pencils for most of her sketches, some of which are stored in her mobile phone; the rest are at her home in Chakar village in Ludhiana. “I am an introvert. So, when my mood is off, I sketch and it refreshes me,” a candid Simranjit tells Outlook.

But once Simranjit puts on her boxing gloves and steps into the ring, she is completely transformed. The delicately honed fingers that skilfully ply pencils are knotted in fists that bring mayhem. The opponents she sends spinning to the canvas or reeling on to the ropes would testify to that. The 5.54 ft-tall boxer’s dexterity was in view on her way to the semi-finals of the World Championships.

Her tactic of ‘long distance’—in other words, she keeps her opp­onents at an arm’s length, before dealing a decisive knockout blow—is coupled with a ‘timing punch’. Her extended left hand is used to confuse the opponent, while the right hand lands a telling counterpunch to score points. “Her coordination, especially inside the ring, is very good, and so is her punching skill,” says Shiv Singh, India’s chief coach.

Boxing, too, came naturally to Simranjit—her eldest sister Amandeep was a boxer. Her two brothers have also been boxers. She initially trained at Sher-e-Punjab Sports Academy in Chakar after Balwant Singh Sandhu spotted her talent at school and took her under his wings. Simranjit was on her way.

Simranjit’s dream is to compete at the 2020 Olympics. But since the 64kg category is not part of Olympic programme, she plans to change her category to 60kg. She follows legendary American boxer Roy Jones and particularly likes his flow and movement in the ring. “One reason for following him is that his stance is similar to mine,” says the girl who repeatedly watches the stylish boxer’s matches on YouTube. 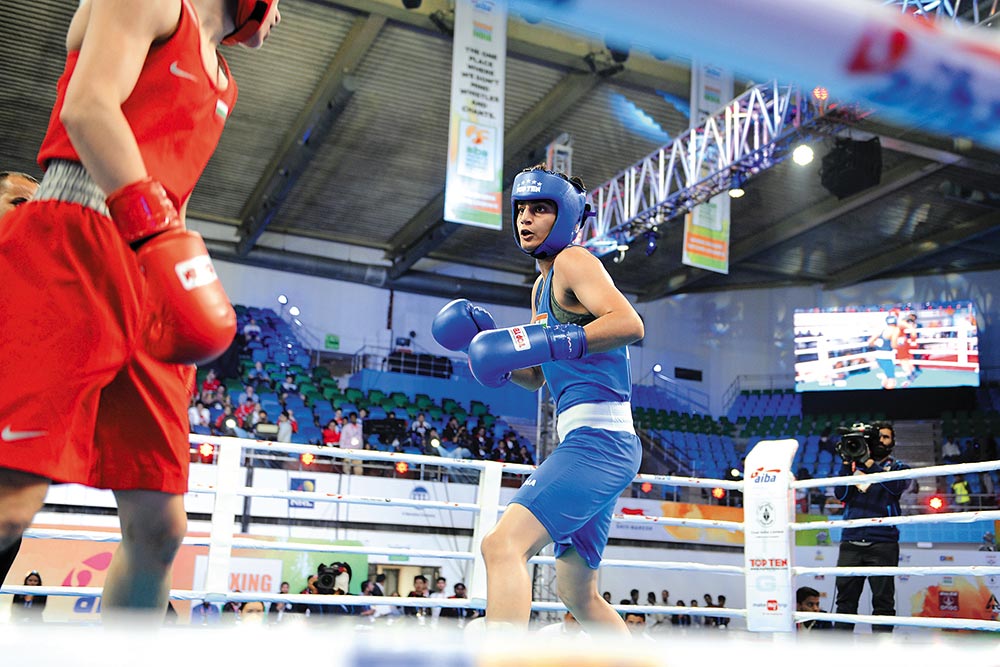 The Adarsh Senior Secondary School in village Bound Kalan in Haryana’s Dadri district has made a significant contribution to Indian boxing. It counts world-class pugilists among its alumni, and Sonia Chahal is the latest torch-bearer. The cherubic, lanky boxer, with a boy crop hairstyle, is adept at hiding her intensity in the ring. Just look at her match against 2014 world champion, Bulgarian Petrova Stanimira, whom she pummelled into submission at the pre-quarters before entering the semi-finals.

“I loved sports. My physical education teacher told me that boxing was my best bet. Those captivating welcome functions were a motivation. One day, I simply went and knocked at Kavita didi’s house. I didn’t know her. Her parents took me to the Bhiwani Boxing Club, run by reno­wned coach Jagdish Singh sir,” she recalls. It was 2011. “My father is a farmer and mother a housewife. I’m the first sportsperson from my family. Neetu didi supported and helped me a lot,” she informs proudly about her boxing idol.

Apart from her upset win over Stanimira, Sonia reckons her biggest win was the one over Pwilao Basumatary, the 2011 World Youth Championships bronze winner, last year. She also won the bronze medal at Ahmet Comert Women’s Tournament in Istanbul this year.

The World Championships is the first major competition for Sonia, but the 5.57 ft-tall, wiry boxer has left an impression with her resilience. “She is one of the most intelligent boxers that I’ve trained. She plays with a cool mind. But she needs to put on some weight. I’m trying that for a couple of years. But she doesn’t have much app­etite,”  says Jagdish Singh, who has also coached Vijender Singh. A BA final student of Mahila Mahavidyalaya, Sonia is on her way to fulfil her potential. 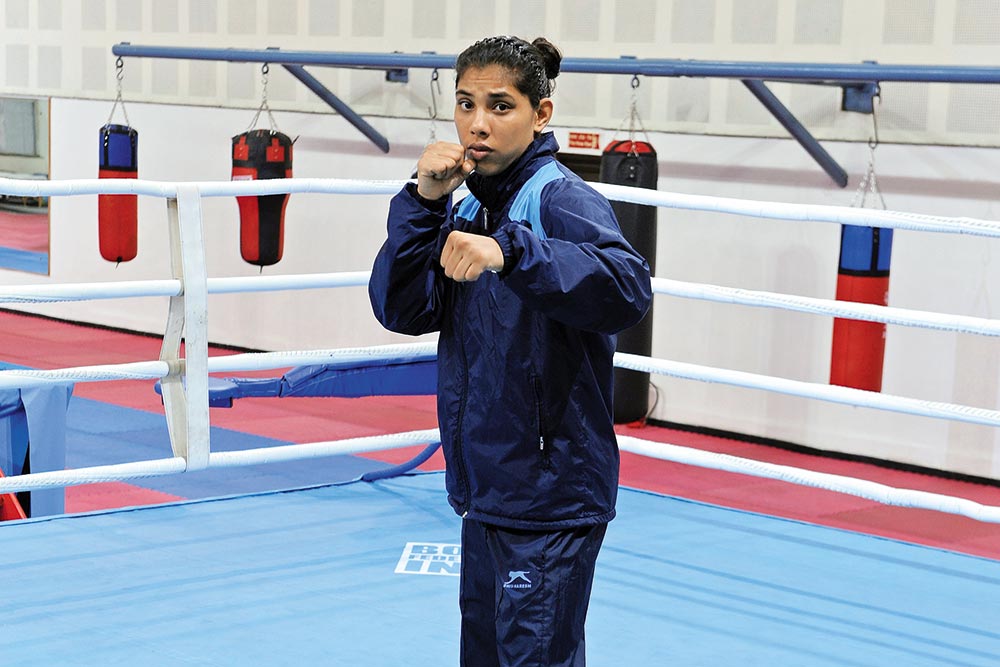 For a long time, Manisha’s father, a tractor mechanic, was oblivious to the fcat that his daughter was a budding sportsperson. Manisha had taken into confidence her indulgent mother. “Father would leave the house early, carrying his lunch with him. He would return only in the evening. In bet­ween, I would play volleyball, which I left for boxing in 2010,” Manisha tells Outlook. Much later, she says with a smile, someone told him about her early exploits in the boxing ring. “When he came to know about it, he beat me up more than once. But I kept at it.” That, anyway, couldn’t have been hidden for long, as she had to walk down the five kilometres to RKSD Post Graduate College in Kaithal, Haryana, and back every day.

“My initiation into sports began when my neighbours, who were volleyball players, asked my mother to let me play. But since there was no volleyball coach at college, I switched to boxing. I was the lone female boxer there,” she informs. Playing sports also meant giving up on favourite childhood act­ivities—playing marbles on the streets and fighting with boys. With her father away on work, her mother was the rock in her life. “Even today, father might not know which class I am in,” says the BA final year student with a hearty chuckle.

Like Simranjit, Manisha uses the ‘long distance strategy’ to good effect, focussing on timing her punches to perfection. She has a strong hook, particularly the one delivered with her right hand. She is now working to improve her strength. Her nimble footwork in the ring is partly due to her love for dance—she is a fan of Sapna Chaudhary, Haryana’s famous dancer. Manisha has trained her sight at the 2020 Olympics and plans to switch back to 57kg soon. 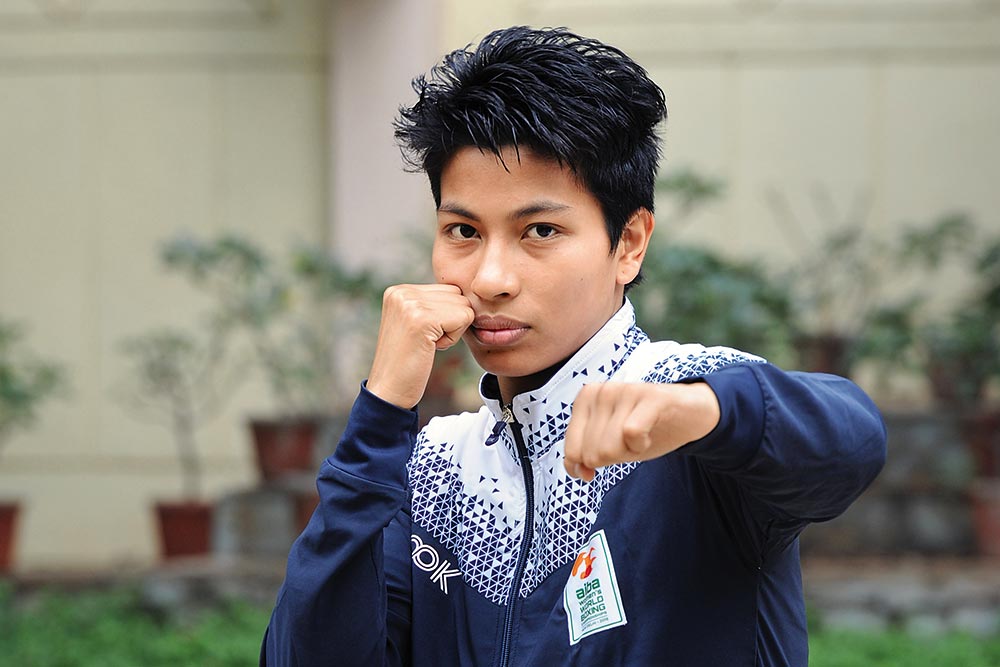 She is entranced by the legendary Muhammad Ali’s footwork, particularly that famous shuffle—so much so that she tries to copy the late triple world heavyweight boxer’s movements in the ring. For all her current expertise in boxing, in school Lovlina practised muay thai—or kick-boxing—that is also fought inside a ring. But when she was 14, a Sports Authority of India boxing coach visited Barpathar Girls’ School in Golaghat, Assam, and identified her as a potential champion. With her parents supporting her, Lovlina switched to boxing. “I was in Class IX when the SAI coach picked me. But I continued to practise kick-boxing, and started boxing in 2012. Earlier, I was in the 75kg class, but later switched to 69kg,” she says. Like other self-respecting boxers, she dreams about qualifying for the 2020 Olympic Games.

Lovlina took a big stride when she beat Panama’s Atheyna Bylon, who has won four American titles this year, with a unanimous verdict at the pre-quarters of the World Championships in New Delhi. The boxer from Golaghat is supremely fit, with good motor ability, which encompasses endurance, strength, coordination, tactics, and technique. But she needs ‘bout maturity’, as chief coach Shiv Singh points out. “She will have to win by hook or by crook. Like a batsman needs to use his mind to score 18 runs off the final three balls, she will have to do the same,” he points out. Lovlina’s left hand is stronger, and she keeps a distance from her opp­onent to ‘disturb’ her. Standing at 5.8 ft, she has a distinct height adv­a­ntage too. “My idol is Muh­am­mad Ali. I like his footwork a lot and, of cou­rse, his shuffle. I try to copy his footwork and a little bit of his shuffle,” she says shyly.

This year has proved to be a fec­und one. Lovlina won the 69kg gold at the Indian Open Tou­r­n­ament, finished second in two events, and third in another one. But she picks her semi-final win over against Mongo­l­ian Erden­et­uya Enkh­baatar in Ulan Bator as the most memor­able. “That was one of the most sati­­sfying wins of my car­eer,” she says. Now, she has one goal. “More than me, my father wants me to box at the Olympics,” she inf­orms.

A Storm With Tusks