The Baleno RS is a belated attempt at doing justice to the name of Maruti, the son of the wind god 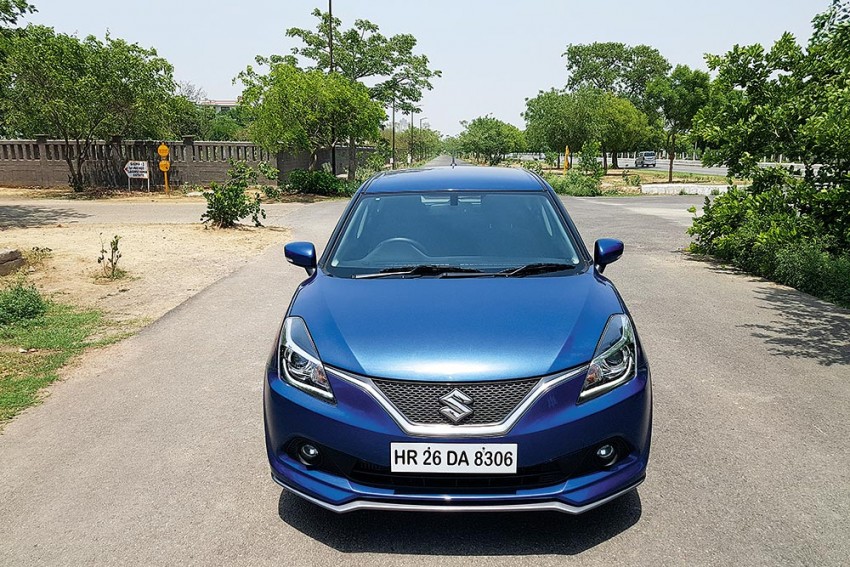 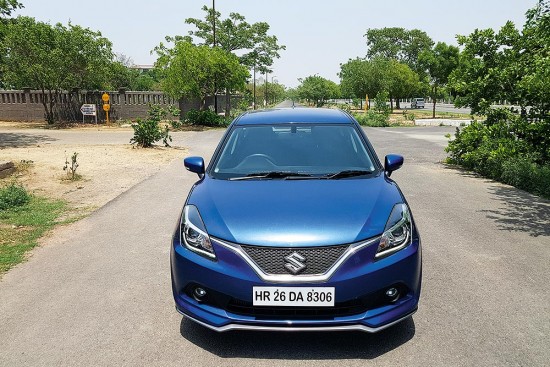 Maruti Suzuki, the car of the masses for India, has done the unthinkable by breaking away from its legacy of, well, sluggishness. It has offered a hot hatch to Indians, who find comfort in thinking like their neighbour and mimicking their docile choices.

With the Baleno RS, Maruti mated a turbocharger—a magical coconut-shaped fan that helps the engine burn better—to a petrol engine for the first time. Though turbo helped trim the size of the 3-pot cylinder to mere 998 CC, it amplified the engine output to 101 bhp—a healthy pump of 17 bhp more than the naturally aspirated 1.2 litre engine of the standard Baleno. The torque too, has been scaled up from 115Nm to 150Nm, which you will appreciate if you have ever struggled to reverse your petrol Swift up any L-shaped inclination.

The Baleno RS’s main competitor, and the only other petrol hatchback to have a turbocharger in India, is the Polo GT TSI, the German car which costs a nominal Rs 50,000 more than the Rs. 8.69 lakh sticker price of the Baleno RS (Delhi). You need to stare hard to tell apart the normal Baleno from the RS, which comes with a redesigned grille, a protruding lower lip, blackened-out wheels and an RS badge to the boot. But it’s hardly the design that will make you go weak in the knees, Maruti is still to come out with one such. Yes, the Swift was quite trendy compared to the other Maruti cars of the time. But if you look closely at the car, you can see a lot of other cars, prominently, the Mini Cooper.

So, why are you shelling out Rs 1.4 lakh extra for the RS as against the standard Baleno?

To find out, let’s close the hood and buckle up. Press the start button and the three-pot engine purrs. It sure feels more refined than the regular three-pots in town. Tickle the accelerator and the car rolls out silently, insulating the cabin from noises. As the RPM needle teeters somewhere between 1,700 and 2,000, the turbo fires up. Your back is suddenly pushed back to the seat as the car bolts till it maxes out at 6000 RPM. The boosterjet engine never says no to your request for power and takes you past 150 km without panting for breath. The stiffened suspension of the RS ensures that you don’t roll like a boat, as in a Swift.

But, the steering kind of lets you down. Above 80 km/hr, the wheel begins to fumble in your hands and you will struggle to hold the light steering to a line. It doesn’t give the driver the confidence or precision that the GT offers. You can make the GT stick to the median line with ease, but not the RS. 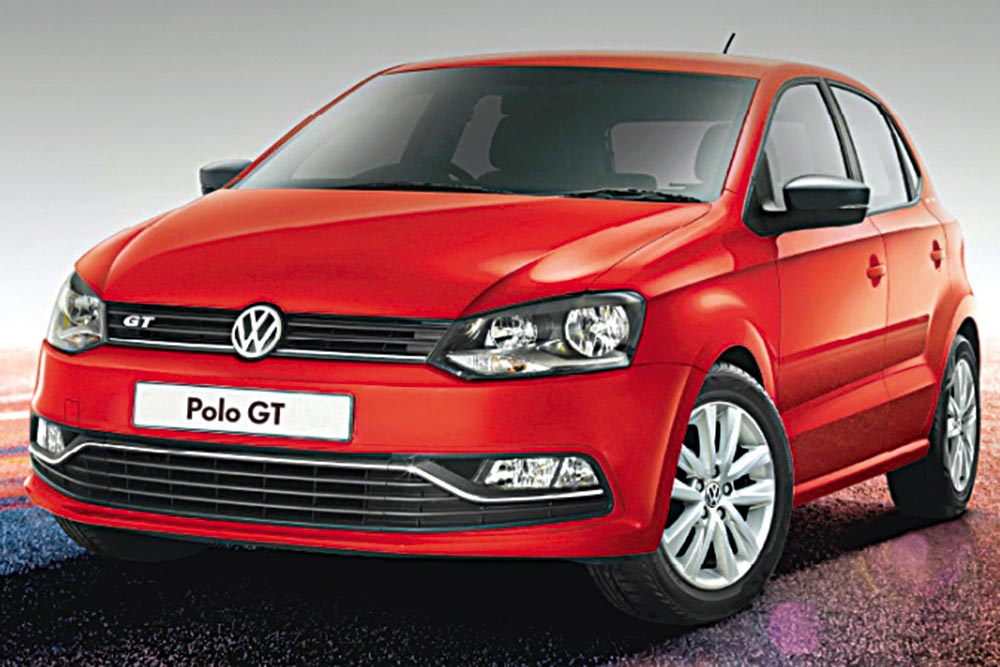 The gear shift is smooth, masking the torque, but what’s that in front of a gem of a transmission in the GT—a 7-speed DSG automatic gearbox with dual clutch, one each for quick upshift and downshift.  While the RS upshift is followed by a slight jerk, which is felt from all three-pot engines, the crass example being the 1.2 litre Polo. However, the GT’s transmission, with a nil rubberband effect, deserves a muaah.

The RS is a lighter car compared to the GT, which results in better power to weight ratio for the Maruti. But the flipside is, with better weight comes better stability. Engaging the RS clutch is as smooth as inserting a knife into a slab of butter due to its smaller clutch pack, but it could vibrate in the long run due the struggle in transmitting the power fully to a smaller clutch plate compared to that of Polo. People who have driven the Swift for long will tell you.

The RS is longer, wider and taller, with a better boot and cabin space than the GT, but the German scores with a slightly higher power and ample torque of 175 Nm. The GT benefits from ‘Electronic Stability Control’, the lack of which makes the RS prone to tail-wagging while taking corners or on uneven roads. The GT also comes with a hill-hold function, which stops your car from rolling back into another while you’re crawling up an incline in stop-start traffic. 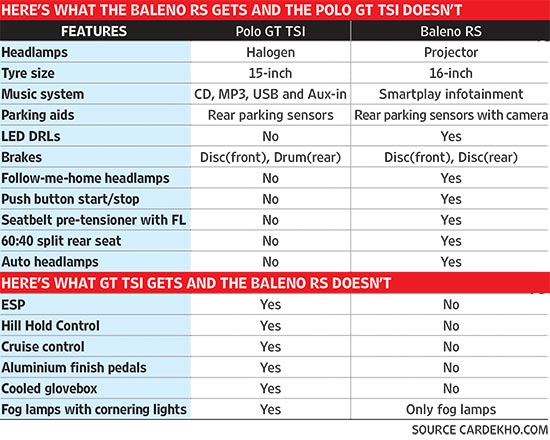 The RS is available only in the top-end alpha trim, just like the GT. Compared to the standard Baleno, the RS gets certain extra features such as projector headlamps, LED daytime running lights, LED tail lamps, reverse camera, auto climate control and an Apple CarPlay-compatible infotainment system. But it misses out on a cooled glovebox, cornering lamps and cruise control. It’s still a mystery as to what good a flat steering wheel is except on racecars, where getting in and out can be torturous. Furthermore, the plastic quality in the RS is a notch below the GT and the seats are covered in tacky fibre.

The RS engine sips its drink slowly compared to the GT, and not to forget the ease of ownership that comes with a Maruti. The Germans will rip you apart if you want a part replaced. For example, if the cable of GT’s automatic window snaps, they will ask you to replace the entire assembly, which will cost you Rs 8,000. Also try locating the service centre of Volkswagen in Delhi, your GPS will run into trouble.

Go for the RS if you like to drive a stick which is a powerhouse, want ease of maintenance and can live with the quirky design.

Go for the GT TSI if you are the one who likes to take-off when the signal turns green and look back with contempt at others struggling at the zebra crossing and if you like the adrenaline rush with every downshift. Only then, you won’t mind spending an extra 50k. But, beware, if the car breaks down, the roadside mechanic will just be like Alice in Wonderland making sense of an unfamiliar environment.

Go for Baleno RS if you like to drive a stick which is a powerhouse, can live with the quirky design, want more cabin space, like a lot of goodies upfront and can’t spend the extra 50k for a quicker gearshift. And also, crucially, if you want ease of maintenance. Even if the car breaks down, a roadside ‘jugaad’ mechanic can get it running.

An Eagle Eye Over The Farm