My arrest is an attempt by PM Koirala to muzzle the pro-active press, says Yubaraj Ghimire 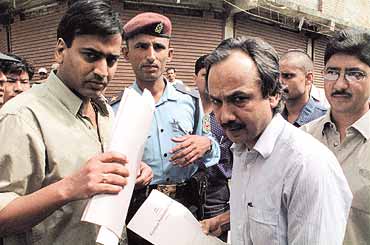 outlookindia.com
-0001-11-30T00:00:00+0553
It was Thursday, June 7. The night-long curfew had been lifted and Kathmandu seemed to be limping back to normalcy, a week after the royal massacre. I had just finished writing my editorial, critical of the views underground Maoist leader Baburam Bhattarai had expressed in the article my newspaper Kantipur, a Nepali publication, had published the day before. Bhattarai's piece had echoed the prejudices of the underground guerrilla outfit and, typically, perceived the royal massacre of June 1 in contrast to what was then considered to be the 'official version' of the tragic incident.

Considering the editorial's tone, it was indeed ironical to find a posse of plainclothes policemen at my office, armed with orders to arrest me and my two colleagues—Kailash Sirohiya (managing director) and Binod Gyawali (director)—on the charge of treason. (Our chairman Hemraj Gyawali wasn't arrested because he wasn't in Kathmandu.)

We had to wait for a week—for the courts to open after a week-long state mourning—before the police recorded our statements separately in the presence of a government lawyer. Indeed, the charge of treason had been pressed against us because we had published Bhattarai's article.

Did the newspaper transgress propriety or law in publishing the opinion piece? The crux of the Maoist leader's argument was that Prince Dipendra wasn't the killer and that there was a deep-seated international conspiracy to wipe out King Birendra—largely because he was a nationalist and liberal democrat and someone who had steadfastly resisted Indian and American pressure to use the army against Maoist guerrillas. Such eulogistic perception of the king was an interesting turnaround for a political formation that had vowed to convert Nepal to republicanism and abolish the institution of monarchy. I thought the change in opinion was significant enough to be communicated to the Nepalis. The underground movement, after all, has claimed 2,000 lives in four years.

But then this wasn't all what Bhattarai had written. The Maoist leader claimed that the cia and India's raw had a role in the palace massacre, stung as the two countries had been at King Birendra's decision to move closer to China. He also portrayed Prime Minister G.P. Koirala as a mere puppet in the tragic episode.

Incidentally, Bhattarai wasn't alone in perceiving a foreign hand in the massacre. Shiv Sena supremo Bal Thackeray, for instance, claimed that Pakistan's isi had a hand in the killing of the royal family, and that at least 120 people perished on the night of June 1 in Narayanhiti Palace. Thackeray's comments were frontpaged in almost all Indian newspapers and The Asian Age, the paper I read during detention, printed it in bold. The Asian Age editor M.J. Akbar, whom I consider my guru, criticised the Nepal government for arresting me but simultaneously thought that printing Bhattarai's article was an example of 'bad journalism' and branded me 'anti-Indian'.

Ironically, in printing Bhattarai's article I had been guided by what I had learnt from MJ. With the Maoist movement emerging as one of the most significant political factors in Nepal, it would have been bad and biased journalism to have not published its views on the most serious crisis to have gripped modern Nepal. Like The Asian Age or The Telegraph during MJ's days, I printed Bhattarai's opinion only because journalistic ethics demanded it, and not because of anti-Indianism.

The authorities in Nepal, obviously, seem to subscribe to Akbar's judgement.Even though I took the entire responsibility for publishing Bhattarai's article and explained the reason why I had decided to print it, the police officer who had come to arrest me wasn't convinced. My anti-Indianism seemed to bother him unduly. He repeatedly asked me: "Will it not spoil Nepal's relationship with India?"

The police officer was articulating what seemed to have suddenly become a sensitive issue for the Nepali establishment. When visiting Indian journalists asked Nepal's foreign minister Chakra Prasad Bastola the reason and justification for my arrest, he replied promptly: "How could we tolerate the Kantipur giving space to an article which accuses raw of such a crime."

The government, in fact, tried to portray that Bhattarai's views, printed on the opinion page, were the editor's and the newspaper's and that the Maoist leader had nothing to do with it. It is now the onerous task of the three-member special court, before which we are scheduled to appear on July 16, to decide whether or not we are guilty of treason. The Constitution that Nepal adopted in 1991 to usher in democracy, incidentally, doesn't have a provision on treason. In other words, the government decided to book us under a vacant law (legalese for the government's right to frame a law by invoking an option it hasn't exercised), a plea that our lawyer and one of the framers of the constitution, Damannath Dhungana, repeatedly made before the court.

The legality (or illegality) of our arrest isn't much of a concern for the current G.P. Koirala government, whose predicament is similar to Rajiv Gandhi's post-Bofors. Tainted, hated, booed and yet sticking to the prime ministerial chair, his venality and tendency to promote family interests have few parallels. Our newspaper has exposed many of his misdeeds, including the leasing of an aircraft from Lauda, an Austrian company. The constitutional authority investigating the deal found the country suffered a whopping loss of over Nepali Rs 390 million because of the deal. Prime Minister Koirala, among others, was questioned by the authority and later 'warned' for his role in pushing the deal. Koirala hasn't forgiven the Kantipur for exposing him, as also its opposition to his periodic attempts to impose press censorship.

Koirala came to power in April 2000, for the fourth time, dislodging his senior colleague K.P. Bhattarai and pledging to provide good governance, tackle corruption and solve the Maoist problem within a year. The reverse has happened: the problems have only worsened, provoking the press to relentlessly criticise his government. Koirala is intolerant of such criticism, more so from us. For, our newspaper is the biggest in the country and enjoys tremendous credibility. Bhattarai's article was only a pretext to curb our freedom of expression.

This is borne out by the executive order, published in the Gazette on June 4, which gives sweeping powers to the chief district officers (cdos) to curtail the fundamental rights of the individual, including the right to appeal to a court of law. The aggrieved person, instead, can only approach the home ministry for the restoration of his rights—a shocking case of the executive appropriating judicial powers. The cdo is also empowered to suspend publication of any newspaper on apprehension or anticipation of any objectionable piece appearing in that paper. What is reprehensible is the fact that the government didn't publicise the June 4 order and published it precisely during the week the nation was in mourning.

But the June 4 order will be bitterly opposed. The Opposition, the media and the human rights groups have decided to mobilise public opinion as well as challenge it in the court on the plea that it's ultra vires of the Constitution. Even the ruling party members were opposed to our arrest. Two senior leaders and former prime ministers—K.P. Bhattarai and Sher Bahadur Deuba—asked Koirala to apologise and drop the case against us.

But deputy PM R.C. Poudel countered their request claiming the case couldn't be dropped because the order came from "above", consequently implicating the secretariat of King Gyanendra in the government's brazen attempt to muzzle the press. But the palace took the unprecedented step of issuing a denial, claiming it had come to know of the arrest only through media reports.

Indeed, like all those who demonstrate authoritarian tendencies, the prime minister chose to ignore the international pressure for releasing us. All that he and his loyalists did was to repeat their charge of treason and declare us to have been guilty of committing crime against the state. Twenty-six years after Indira Gandhi imposed the dreaded Emergency on India, there are a handful of leaders who don't shy of declaring slogans like Koirala is Democracy, or GPK is the Congress. Our arrest is a crucial test for Nepal's fledgling democracy and free speech.

(The author is Editor, Kantipur (Daily), a Kathmandu-based Nepali daily; he was an Assistant Editor with Outlook)

The Art Of Graft