Blotch On The Maple 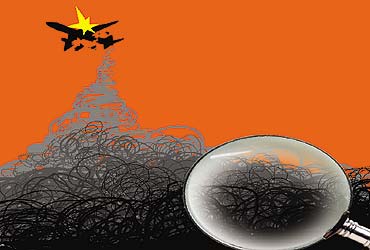 outlookindia.com
-0001-11-30T00:00:00+0553
We are a smug lot, we Canadians. We're taught that ours is a kinder, gentler, somehow more competent nation than the place along our southern border. No more. Last year, a newly elected right-wing Canadian government announced a judicial inquiry into the Air India bombings of 22 years ago that left 331 dead, most aboard the 747 Kanishka when it blew up off the south coast of Ireland. (The other explosion occurred at Japan's Narita airport in a Vancouver suitcase tagged for an AI flight, killing two.) The revelations that have poured out of the opening weeks of the judicial inquiry have been breathtaking, shocking, eye-opening. There's been testimony that points to rampant racism in the police and spy service, their ineptitude on a grand scale, and a cynical cover-up of all this—and probably more.

At least half a dozen credible witnesses have told the inquiry that there was ample evidence that Sikh separatists allied to the Canada-based Babbar Khalsa had their eye on Kanishka and were primed to plant a bomb on board. Others have said the plane took off from its last Canadian stop, Montreal, despite official knowledge that there was suspicious baggage on board. There were no sniffer dogs available that night on June 23, 1985, because a canine conference had them all in Toronto in meetings. Really.

The Royal Canadian Mounted Police knew about the bomb plots. Spies in the newly created but incompetent Canadian Security Intelligence Service had been tapping phones and talking to informers for months. AI's security chief was blamed for nixing a thorough search of Kaniskha before it took off because it would cost too much.

Much of this wasn't known before. Some of the people who've given the most alarming testimony have just come forward, ending 22 years of what, I hope, was difficult silence. I fear it may not have been as uncomfortable as it should be, at least for some. Because something we have known about the AI bombings almost since the dreadful news began to trickle in was the massive role of racial indifference, if not outright racism, in the tragedy.

This is true at every level. Then Canada's prime minister, Brian Mulroney, called Rajiv Gandhi in Delhi to commiserate over the bombing. Never mind that nearly 300 of the victims were Canadians. What's now known as the largest mass murder in Canadian history was believed for years to have affected only Indians and therefore less worthy of concern than if white Canadians were involved.

In fact, a Canadian prime minister didn't even go to Ireland to join the annual commemoration ceremony held by victims' relatives until 2005. Governments prior to that stonewalled and refused to meet families of victims or take their concerns seriously. The Canadian media, except some, delved into the story occasionally, emphasising the foreignness of it—turbaned fanatics bombing planeloads of brown people over a territorial spat in a land far away.

Bal Gupta, a Toronto man who lost his wife on the Kaniskha flight, told me in 2005 that he endured over a decade of neglect and, occasionally, nastiness from Canadian politicians. I met him as two men went on trial in Vancouver, charged with buying bombs and putting suitcases on planes; both were acquitted after Canada's most expensive criminal trial. The judge expressed utter disdain for the prosecution and investigating agencies, censuring them for mishandling of evidence. Gupta later said he wasn't surprised, having met the policemen and spies in question and finding them to be petty, ill-informed and close-minded.

Justice John Major's inquiry wasn't supposed to be this way. It was expected to conclude that Canada in 1985 wasn't equipped to deal with a vicious terrorist organisation. Instead, what's emerging is evidence of almost criminal negligence. Many in India think the Rajiv Gandhi government may have known much more than it should have about plans to bomb AI, thanks to informers in the Babbar Khalsa. Moderate Sikh opinion in Canada and India was sickened by the outrage, which did no harm whatsoever to the long battle for hearts, minds and political opinion in Punjab.

Canadian officials have long insisted that much about the Kanishka affair is top secret. Justice Major even threatened to suspend his inquiry when government documents arrived heavily censored on the opening days. A Canadian official I once knew in New Delhi used to boast about destroying documents related to Canada-India spy contacts. I later found out he was the spy-on-duty in Vancouver the week of the attacks. That may be one for the conspiracy books, and not anything we can expect to be clarified in the coming months. But I know one thing for sure, Canadian smugness has taken a hit in recent weeks. So, I hope, has official racism, incompetence and secrecy.

Barbarians At The Gates