With the government firmly opposed to the Cairn sellout, Vedanta has hit another roadblock 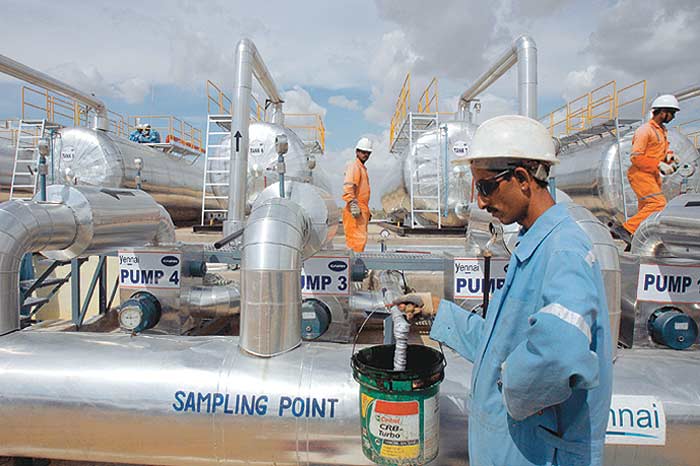 A prized foreign investor who’s selling out, a controversial business baron that’s buying in, and a government in full sulk. The UK-based Cairn Energy’s “quiet” bid to sell a majority stake in its Indian entity to the in-the-news Vedanta Resources early this month has stirred up a right royal storm. Even if petroleum minister Murli Deora tells Outlook he’s “neither happy nor unhappy” about the deal, he does add that “there are several points which can be of concern”. But he’s unwilling to say more “till we make up our mind which side we will go”. This deliberate ambiguity and equivocation has to do, naturally, with realpolitik.

Till the story first broke in early August, neither the government nor state-run ONGC—which is a 30 per cent stakeholder in Cairn India’s largest oil-producing asset in Rajasthan—had “even a whiff” of the deal. Before they could react, on August 16, Cairn Energy made public its intended stake sale of up to 51 per cent (valued around $8.5 billion to $9 billion) to Vedanta. This naturally upset the Shastri Bhavan mandarins. “Specific permission on transfer of ownership or participation interest is required,” stresses petroleum secretary S. Sundareshan, adding that the ministry has written to Cairn Energy seeking “clarifications”.

“There are several points of concern. But we still have to make up our mind which side we will go.”
Murli Deora, Petroleum minister

Remember, this comes soon after the Supreme Court verdict on the Ambani brothers’ row, establishing the government’s “sovereign right” over the country’s natural wealth. As industry experts point out, this is not a usual company stake sale—it involves the sensitive hydrocarbons sector. Cairn’s counter-argument is that it doesn’t need government approval for the deal, as it has not changed the ownership of the prized Mangala oil fields in Rajasthan’s Barmer region, which holds the potential to produce one-fifth of India’s crude oil production by 2011. While this is technically correct—ONGC clearly hasn’t negotiated this pre-NELP (New Exploration Licensing Policy) contract properly—the petroleum ministry is stressing the “spirit and not the letter” of the law.

“The deal planners should have taken  GoI into confidence. It appears the government is concerned about the potential sidetracking of its role as the trustee of mineral resources,” says Venkatesh Raman Prasad, partner, J. Sagar Associates. Pointing to grey areas in the deal, experts say the government could well claim that there is a change in operator because of Vedanta becoming the ultimate parent of Cairn. That’s why it has sought more information on Vedanta’s credentials in upstream operations.

Complicating matters is the political twist. Seen as a beneficiary of the NDA government’s disinvestment drive, Anil Agarwal’s Vedanta is currently viewed as a political ‘hot potato’. Particularly as Congress heir apparent Rahul Gandhi has used the denial of environmental licence to Vedanta’s bauxite mining project in Orissa as a platform to take up the cause of tribals. “Anil Agarwal has people in all parties. If he has a support base, he also has enemies in all parties as Vedanta’s success is marred by malpractices,” says a bjp political leader.

Despite its corporate successes, Vedanta Resources is not necessarily the government choice for taking over assets like Cairn’s prized oil fields. But it would be tough to knock out Vendanta on grounds of “inexperience”. As energy and environment expert Probir Sengupta points out, in the mid-’90s, Reliance had picked up 30 per cent stake in Panna-Mukta-Tapti with no prior experience and later acquired many exploration blocks. Today, its KG basin block has nearly doubled the country’s gas production.

Also, Cairn’s plans to monetise its assets in India to raise funds for exploration in other parts of the globe was not unexpected, point out experts. “Exploration is Cairn’s USP, not production, as it requires deep pockets. Surely they would like to take new risks in places like Greenland,” says energy expert V. Raghuraman. Former petroleum secretary S.C. Tripathi points out that as early as 2005, soon after the oil discovery in Rajasthan, Cairn indicated plans to dilute its stake in its Indian subsidiary.

“The contract with Vedanta is at the shareholder level. We will seek GoI’s consent and endorsement.”
Bill Gammell, Cairn CEO

But even then, based on an expert panel report, ONGC found the price too high. At a review meeting held by the petroleum ministry, it was felt that ONGC should not block funds in a producing field within the country and instead focus on overseas acquisition for energy security. Moreover, there are historical anomalies with the Rajasthan block, resulting in a skewed royalty payout by ONGC.

Official sources admit “at the heart of the issue are procedural matters, besides pending issues of cess and royalty (totalling around Rs 400 crore annually at current 125,000 barrels/day), which is falling totally on ONGC despite it having only 30 per cent stake in the Rajasthan block”. With Vedanta announcing plans to double production at the Rajasthan oil field, this royalty burden on ONGC will only increase. Expect a change in this status quo with Cairn/Vedanta paying a “generous” share.

And what about the perceived pressure from homegrown major, Reliance, which has plentiful clout with the government? While competition from PSUs can easily be knocked over, experts feel “with a big entity like Vedanta, Reliance may be feeling a bit threatened” as their expansion plans through diversification are similar. That said, it’s unlikely that Reliance will step in to place a counter-bid.

As the petroleum ministry continues evaluating Cairn’s move to ensure there are no production sharing contract violations—as it could lead to Cairn losing out in NELP blocks—it’s a waiting game in anticipation of a counter-bid. So far, the PSUs have shown no signs of any such move (the “inflated” price Vedanta is paying is a deterrent). On the face of it, there is little to hold back a clearance to the Cairn stake takeover by Vedanta. Of course, there’s that matter of a price to be paid to soothe those ruffled feathers.