Do we, the Indian middle class, see the corruption within us?

More from Sheela Reddy
View All

I was too busy being corrupt to join Anna Hazare’s camp last week. For four days, I heard nothing but stories of our Tahrir Square-like revolution against the corrupt unfurling right under our noses in Delhi’s Jantar Mantar. But it was school admission time and I had some serious palm-greasing, document-fudging, string-pulling, weight-throwing and tout-chasing to do. I had to get my maid’s seven-year-old boy into a public school under the special EWS (economically weaker section) quota for the disadvantaged. He didn’t get in—there were a couple of hundred other candidates (none of them more genuine than my boy, let me add) who had got there before us, all of them armed with documents procured at a price, and with recommendation letters from either a minister or an archbishop, or maybe both. It made me angry—the corruption, of course; but also because others were better at it than me.

Which was why it wasn’t hard to figure out where this collective rage against the corrupt was coming from—the filmstars who waved flags with an enthusiasm oblivious to how many times they have dodged taxes or paid off authorities from customs clerks to firemen and cops; the holy men who shouted themselves hoarse about the nation being looted before retiring to their multi-crore ashrams; the salaried ranting against politicians, forgetting their own fudged travel bills and house rent receipts; the doctors who have forgotten how many unnecessary tests they make their patients undergo; the lawyers, equally amnesiac about charging Rs 1 lakh for an appearance and Rs 10 lakh for a non-appearance; housewives, so morally indignant now but who don’t blink an eyelid before paying off a telephone linesman or a cop at a traffic light; even the auto-driver, who doesn’t choose to remember now how many times he has refused to go by the meter. And the students—were they too young to remember how their dads and uncles stacked up the envelopes of cash at the beginning of every month—the haftas for petty clerks of each of the score of government departments that could put a spanner in running a factory or business? Do they want to look closely at how dad can afford to send them to business school abroad before shooting their mouths off? 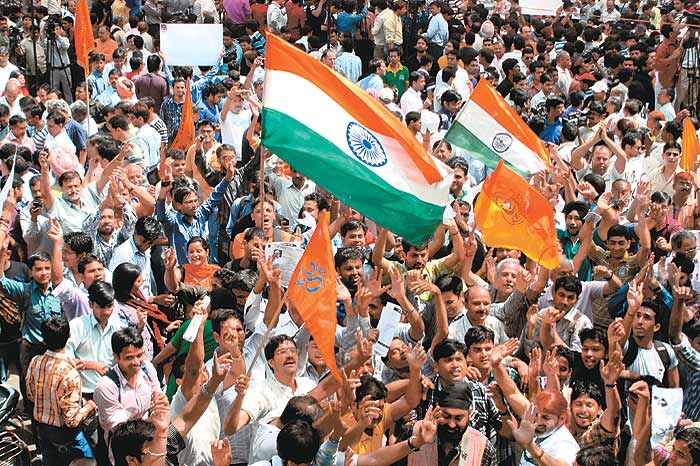 Anna For All Participants in the Jan Lokpal Bill march in Delhi. (Photograph by Tribhuvan Tiwari)