Weavers’ looms have fallen silent in Etawah. They now await the death blow from a cashless economy. 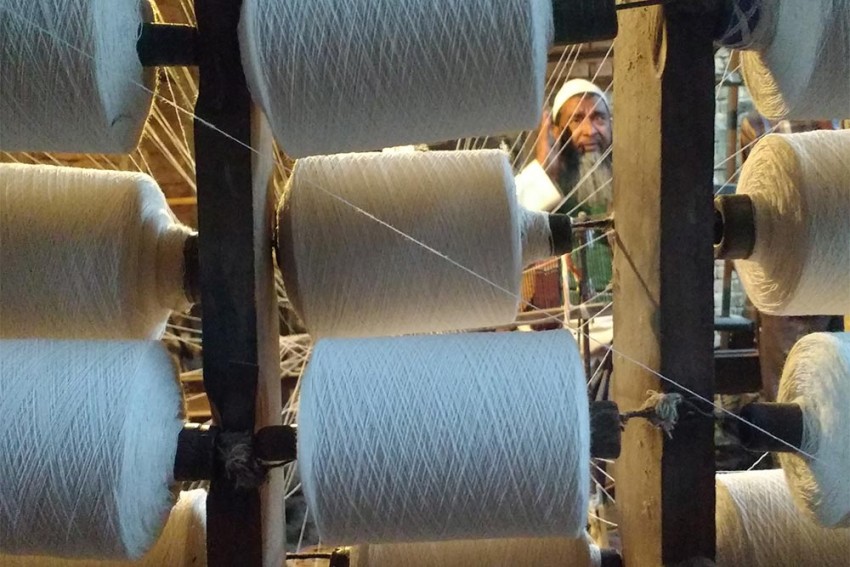 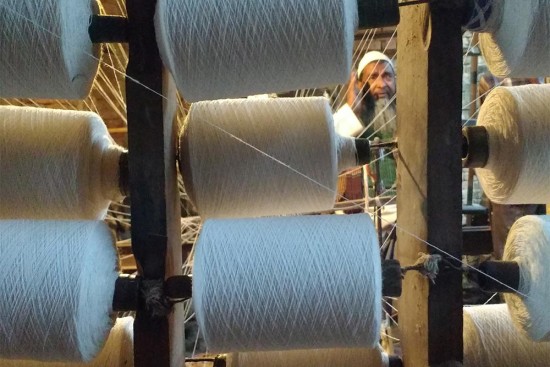 Sitting atop a white gunny sack filled with spools of cotton thread, Mohd Salim counts the days since he last handled cash. “I don’t understand why the fight against black money is being linked with us having no cash. It is ten days since I handled Rs 5,000. Ab Rs 100 ka note bhi gayab hai—now even the Rs 100 note has vanished,” he says.

Salim is a weaver in Etawah town of central Uttar Pradesh, a trade plied by more than 40,000 here. Their principal product is the gamchha, a traditional, diaphanous cotton towel widely used in eastern and northern India. To make  gamchhas, a weaver first buys cotton thread, sold in the form of spools, by the sack-load. The smallest sack, weighing  60 kg, costs Rs 6,500-7,000.

Salim is at a tiny store-cum-godown run by his supplier in one of the town’s narrow by-lanes. A few other weavers are hanging around too, trying to get, on  credit, a few sacks of the thread.

All of the weavers work on power looms, far more efficient than the ones their fathers or grandfathers used. These looms require a steady supply of thread, which have only been bought, so far, in cash. Now, nearly three weeks since the government stopped the supply of Rs 500 and Rs 1,000 notes, the city’s weavers are afraid of getting pushed out of business.

Initially, Etawah’s weavers were willing to brazen out inconveniences, happy to play a part in weeding out black money. But ever since the Mann Ki Baat address in which PM Modi gave the spin of modernisation and cashlessness as a permanent state of being, there are murmurs of concern. At first, the weavers felt demonetisation would hurt only the rich, but now feel their survival is at stake too. Put another way, in this shifting terrain of narratives, the weavers of Etawah are not oblivious to subtle shifts in political messaging. This is because both demonetisation and the shift to a ‘cashless society’ have direct bearing on them.

“We are not the ATM-Paytm type,” says Salim, whose family is feeling the pinch  in the attempt to manoeuvre everybody away from cash. “We use cash because cash is free. With ATM, I am told, people pay extra for each transaction. I can either feed my family or pay extra charges.”

Three decades ago, there was a massive shift of weavers to power looms, which had displaced thousands. In a situation where a dyer can live off savings for 8-10 days, things are equally dire.

As a home-based weaver, Salim has less access to credit and fewer resources to fall back on in rough times like these. But Mohd Ansar, another weaver, has five-six weavers working for him on four power looms. He has better chances of accessing funds. “Small gamchha weavers are affected most by the withdrawal of big notes,” he says. “We hear cash supplies will be hit for four-six months. If that happens we’re all doomed, big or small.”

In the first couple of days after big notes were sucked out the system there was great enthusiasm at the weaver’s colony in Etawah, Jagannathpura, home to about 15,000 weavers and their looms. Till two weeks back, these looms were producing chequered gamchhas late into the night; now, everyone stops work at sundown. “We get paid based on how much work we do, so we often worked evenings, but now that there’s no money we work less,” says Mohd Akbar, a middle-aged weaver, whose faith in the great exercise to weed out black money is rapidly fading. “We don’t have any black money, so why are we suffering?” he asks, as looms lie idle in the vicinity, many with threads spooled in.

Jagannathpura also houses dyers, and their red, blue and green dyes have  permanently scarred the floors of their living quarters. Most of them are away, too, on this late Tuesday afternoon. “The dyers cannot work unless the thread is brought here by the weavers,” says Mohd Zubair. “They’re all at home.” Indeed, even normally, dyers and weavers can barely make ends meet. That is why, unlike the rest of Etawah city, which has moved into concrete-and-plaster houses, they live in semi-finished brick homes along unpaved streets, with only a dim bulb or two hanging atop their looms. 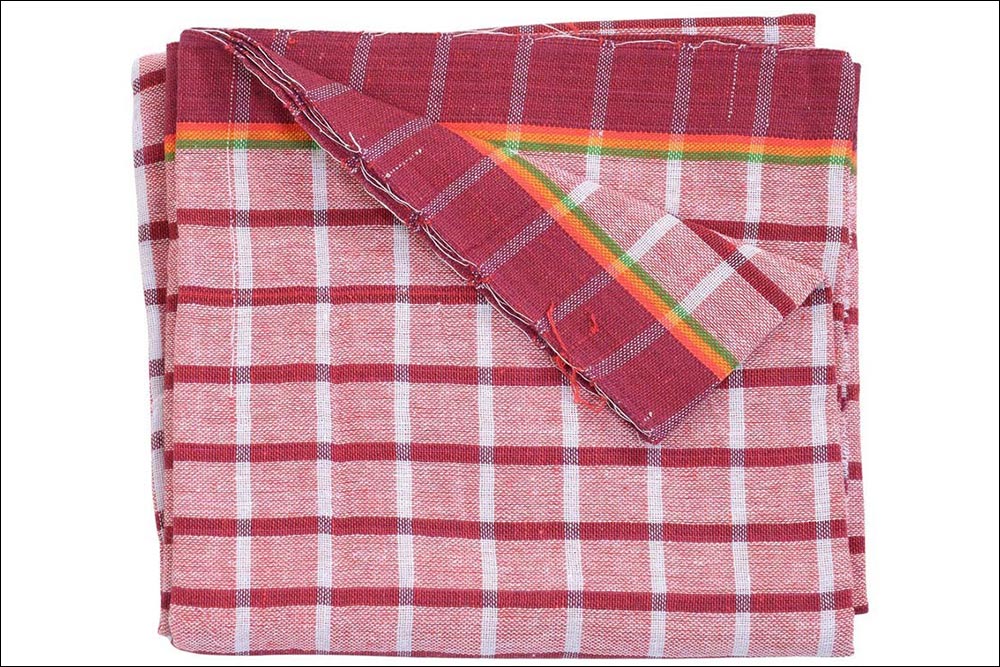 Zubair estimates that the average dyer can live off savings for roughly 8-10 days. “After that, they get desperate for work. The way the campaign against black money has been implemented, it is proving deadly for lower classes. And the situation is worsening every day,” he says.

On an average, workers here earn Rs 90 to Rs 140 a day, for eight to 12 hours of work. Few, therefore, have bank accounts. Should they start paying the transaction fees by using debit or credit cards, their businesses would collapse, for as these wages indicate, the gamchha business is a low-cost, high-volume and low-margin business. The cheapest towel made here can sell for Rs 30 a piece. In any case, the weavers have no buyers these days, for the middle class and wealthier sections are also strapped for cash, or hoarding their Rs 100 notes.

The last time there was a crisis in the weaving community was three decades ago, when there was a massive shift of weavers to power looms, displacing thousands. “Today’s crisis reminds me of that time. Then, jobless weavers had gone into cities to find work,” says Sultan Mohd Ansari, 62. “In the roti, kapda and makaan trinity, we weavers handle the kapda, a necessity for all, yet we face crisis after crisis without warning or help. In three months even these power looms will start closing.”

Ansari isn’t alone in feeling trampled upon by the sudden demonetisation. The  general sense of unease stems from the awareness of the impact cashlessness can have on their bare bones livelihood. Nervous weavers have taken to gathering around tea shops in the evenings, where they discuss the fallout of everything going cashless. Discussions get loud and heated, with weavers shouting incomprehensibly over each other. The chaiwala grimaces: “Have you noticed? So many are sitting here since an hour, but not one bought even a cup of tea. They don’t even have chillar (loose change in coins) for chai.”

Around 150 km away, in western Uttar Pradesh’s Agra city, Bhagat Singh and Mukesh, both employed in a firm that sells sewing machines, are anxious. The company, located in Agra’s crowded Mantola area, have seen not a single customer come in, nor, ominously, does the telephone ring. “There’s no business worth even a paisa, though Diwali to Holi is the most active season,” says Mukesh, a mechanic.

Bhagat, a fitter, earns Rs 500 to Rs 1000 a day (he also does repairs). “I have five children and never saved any money. My malik is supporting me, but even he is making no sales,” says he. Ask Mukesh and Bhagat what they make of the fight against black money and both look away in distress, refusing comment, like many others in the city and villages around.

“Saturday is pay day for Agra’s leather workers and most of them were sent home with old notes. I, too, have shut my factory, for I have no cash. Almost everything is closed,” says Mukee­mu­ddin Qureishi, a Samajwadi Party leader and shoe-factory owner. Agra has over 20,000 small and large shoe units, which meets 60 per cent of India’s domestic shoe demand and roughly half of its leather exports, employing around 3.5 lakh people. Now, it’s not just the liquidity crunch that traders talk about, but also the impending shift to permanent cashlessness.

The problem is not just that there’s no ATM or Paytm in some places or that people don’t know how to use bank accounts. The bigger issue is that many industries, including shoes, glass, textiles and agro-based industries, work on such low margins that doing everything the way a big business does, with debit and credit cards, would push smaller players out of work, pushing lakhs of poor Indians into penury. “Modi is also pareshaan,” says Qureishi. “He calls it kadak chai but knows it’s election time and that he took nobody’s permission for any of this.” Indeed, a dread, voiceless rebuke might be in the offing.

Modinomics On A Roll