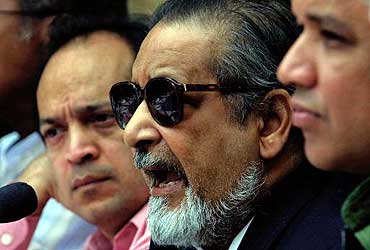 outlookindia.com
-0001-11-30T00:00:00+0553
Packing 60 writers and literary critics into two buses for a three-day outing to Neemrana Fort Palace didn't seem like a very good idea. Writers and their egos make notoriously bad travelling companions. But three hours later, when they trudged up the rugged path to the picturesquely restored 15th century fort hotel, some 150 km from Delhi, they shared at least two things in common: an urgent desire for cold beer and a disinclination to argue with their "drill master" Himachal Som, the genial and overwhelming iccr chief and coordinator of the International Festival of Indian Literature. Himachal cajoled, bullied, browbeat and humoured the celebrity writers into the docile submission of a school party.

"Who can say no to Himachal!" remarked an unexpectedly affable Vikram Seth at lunch, when someone expressed surprise at him being there at all. The famously reclusive Seth didn't want to come for the conference, of course, but having finished with a teaching assignment at Stanford (a course on creative arts and music) and doing "nothing" in London, he could come up with no suitable pretext to stay away from a conference that in a reckless moment a year ago he told Som was a good idea. "Where's home?" I asked him. "Wherever my books are. Right now I'm in London and my books are in Delhi, and I'm wondering whether to shift my books over there, or shift myself here." He's doing nothing right now. And by nothing, he means three hours of Chinese calligraphy, copying his favourite Chinese poets, writing poetry, walking in a London park, taking a swim and toying with story ideas, among other things.

There were others who let themselves be led by the nose into a conference packed with ominous issues. No one was quite sure why they had come, but there they all were: V.S. Naipaul, accompanied by a largish entourage, including his wife Nadira, his literary agent Gillon Aitken and friends David Pryce-Jones, author and former editor of The Times Literary Supplement, and his wife. Amitav Ghosh, Ved Mehta with his young wife, Amit Chaudhuri, Khushwant Singh, Dom Moraes with his friend Saryu Ahuja, Arvind Krishna Mehrotra, I. Allan Sealy, Farrukh Dhondy, Pico Iyer, Nayantara Sehgal, Shashi Deshpande, Kiran Nagarkar and Keki Daruwalla were all there to liven up the party. But it's not as if it was a sombre, old-boys' affair, the young turks of iwe—Githa Hariharan, Ruchir Joshi, Imtiaz Dharker, Mukul Kesavan, Amitava Kumar and Anita Rau Badami—were also there, ready with their lines. The regional writers, on the other hand, looked as if they had just boarded, with some distrust, Noah's Ark in scrambled pairs: U.R. Ananthamurthy, M.T. Vasudevan Nair, Paul Zacharia, Shrilal Shukla and Sukrita P. Kumar, all with their better halves. And, singly: Sunil Gangopadhyay, Ashokamitran, Bhalachandra Nemade—"political representation," as one of them ruefully described it.

The mellowing effects of lunch and a brilliant winter afternoon ensured peace in the first day's session. Or was it because the fiercely outspoken iwe-basher, Marathi writer Bhalachandra Nemade, arrived too late to join the panel on 'Who is an Indian Writer?'. But peace reigned all afternoon—Amitav Ghosh explained how he had never felt more Indian than when he lived in a small village in Egypt and felt compelled to define his Indianness to strangers. Ved Mehta talked eloquently of the advantages of diasporic Indian writing—the advantage of dealing with crystallised memories that are undiluted by new experience, a point that struck V. S. Naipaul strongly enough to mention at the closing session, but left writers like Shashi Deshpande a little indignant: "Not all Indian English writing is by expats? What about me? My publishers are here, my readers are here and I am writing in a language that is as Indian as Marathi or Hindi," she declared to writers who dozed, listened, rolled cigarettes, passed each other irreverent messages and doodled (Seth in beautifully indecipherable Chinese letters with music notations in the margins, while Imtiaz Dharker sketched the faces around the table).

Yet another angry writer was greeted with the same, beer-induced impassivity. "What is the point?" Gujarati poet Sitanshu Yashaschandra snapped at an unsuspecting iwe who asked him, either out of courtesy or curiosity, to read aloud his poem in Gujarati in the poetry-reading session. "If you really want to read Gujarati poetry, learn Gujarati."

Session over, the party moved with a concerted sigh of relief to a moonlit open auditorium for an Odissi dance by Sonal Mansingh. The real business of the day—getting writers to know each other and recognise their common ground—began, as always, with the cocktails. Tongues loosened, wary body postures began to relax and conversation between writers, who had so far only read each other and often not even that, began to flow as fast as the whisky and wine. Paul Zacharia shook Vikram Seth's hand, telling him how much he had liked his travelogue, From Heaven Lake. If Seth was ever a recluse, there was no sign of it: he circulated, exuding charm. "I'm a friendly guy," he insisted, "it's just that I don't see why I have to give interviews when I'd much rather spend my time with my family, or my books." Ved Mehta, circulating with an ease that belies his blindness, wondered why he went on writing—his publisher has just told him that since his books don't sell, they don't want to publish his next book.

At the other end, however, where Naipaul was seated next to Khushwant Singh, the excrement was about to hit the fan. At the best of times, Naipaul's temper is uncertain. He does not suffer fools gladly and it's hard to tell who or what will irritate him. Most writers with a healthy sense of self-preservation kept a wary distance from the irascible Nobel laureate, speaking only when he summoned them for a conversation. But a foreign diplomat's wife, alas, dared not only to join in the conversation uninvited, but committed the added folly of contradicting him. He didn't mince his words: "You are foolish and illiterate," he told her. The lady, instead of slinking away in abject shame, proclaimed her literacy: she taught at universities in two countries. The spat grew into a crisis that almost brought the first Indian literature conclave to an end. Naipaul wanted to cancel all his engagements and go home the next morning. Hours of importuning by Nadira, their friends, an apology from the unfortunate lady had no effect on Naipaul. It was Himachal who saved the day—and the conference—by pleading with him "for the sake of literature". Naipaul stayed and the second day of the conference began in a more subdued mood.

But not for long: the fatal words, "foolish and illiterate" sprang up yet again before the day was done. It was Nemade's turn this time to hurl them at Khushwant Singh for having the temerity to say that regional languages lack the vocabulary for modern literature.

Speaking on 'Unmapped Spaces in Indian Writing', Khushwant bluntly stepped on many toes, mostly regional, when he pointed to the three big gaps in Indian literature: writing on nature, humour, and biographies.

But if it's absent in their writing, there was no dearth of humour outside the conference hall. Paul Zacharia stopped the retiring Hindi novelist Shrilal Shukla as he climbed up the stairs to the tea table set out in the open.Picking a leaf that had strayed onto Shukla's hair, Paul quipped: "Was someone saying there is no bonding with nature? And here you are carrying away a piece of nature on you." The rancour began evaporating in the magical evening air. Amitav Ghosh walked away, chatting amicably to Sunilda, Vikram Seth sat down for a chat with Ananthamurthy, Shashi Deshpande forgave me for "encouraging a rift between regional and English writers", and even Nemade found it in his heart to forgive my daughter for owning no language other than English.

"After all," Paul said to me as we ate cake and sipped tea on the terrace, "we're here because of them." He pointed to the iwes conversing among themselves. "Who'll ever host a conference like this for us?"

It was now time to celebrate—the conference was almost over and no one had yet left Neemrana in disgust or despair. Even Naipaul had consented to attend the last session and was now benevolently smiling at the spectacular Rajasthani dancers who whirled around the room. The high spirits emboldened Nayantara Sehgal to go up to Naipaul with a story: Naipaul and his former wife were visiting them, when Naipaul suddenly said, "Would anyone like to sing?" and when no one did, he volunteered to sing a Jamaican song. Naipaul, however, had no recollection of the incident. But Nayantara returned to our table unharmed. "He said," she reported as she joined us like a conquering heroine, "'it's a charming story. Thank you for telling me. But it never happened'."

But her luck didn't last long. With Sir Vidia cajoled into addressing the first press conference in many years, the tension was palpable. A nervous Himachal paced up and down and Nadira smoked cigarette after cigarette. But it was not, as they feared, the reporters who were in danger from the redoubtable Nobel laureate. The outburst was directed this time against his own co-panelist, Nayantara, the woman who had told him a "charming story" last night. As Nayantara began speaking from her four-page notes about Midnight's Children and the Weight of History, Sir Vidia could no longer endure the banalities around him. "Instead of talking in the air like this," he suggested that the reporters be allowed to ask some questions. "Banal words like gender discrimination irritate me. Words like oppression weary me," he declared. Nayantara collapsed into hurt silence, but Shashi Deshpande had the last word. A reporter asked her how she felt about being one of Naipaul's targets. Shashi replied: "My concerns may appear banal to him, but his are the same to me."