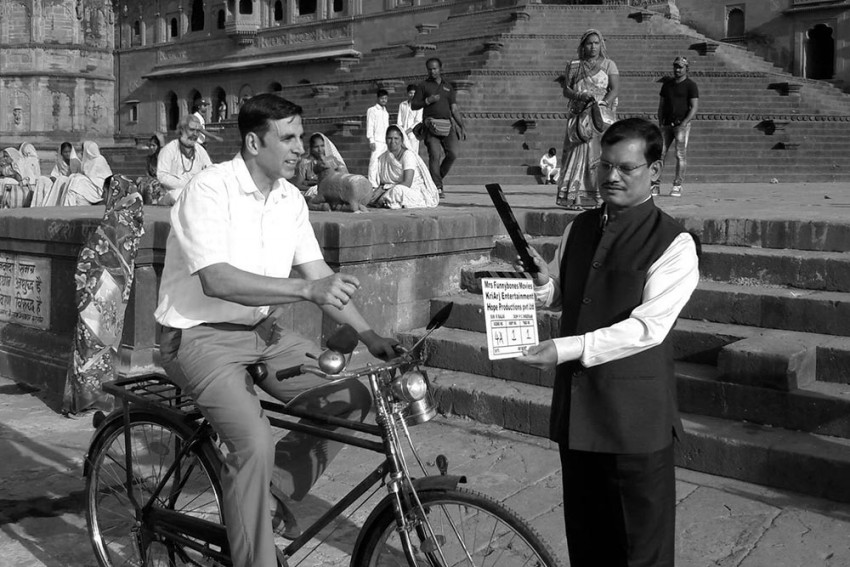 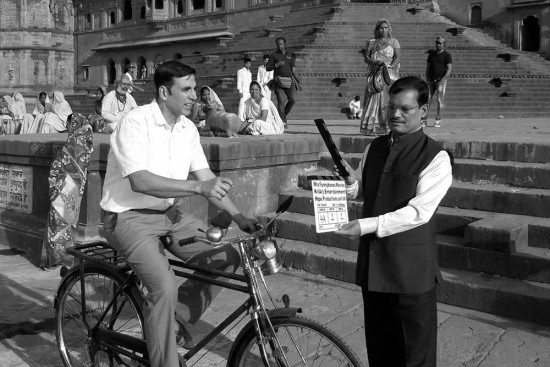 The machine came first, the dau­ghter only later, quips Aruna­chalam Muruganantham, ton­gue in cheek. “All because of my obsession with the sanitary pad.” The 55-year-old is referr­ing to how his daughter was born only ten years after his marriage. For, his wife had walked out on him, protesting against his obsession with his sanitary pad project. Shanthi did ret­urn to live with him, but only after he succeeded and won social recognition.

Not just recognition. Today, even Bolly­wood fame. Actor Askhay Kumar decided to make PadMan, based on Murugananth­am’s mission that has freed thousands of women from the shackles of unhygienic living during their periods. First Muru­ganantham and now Aks­hay have together dared where no Indian man has been before: the sensitive issue of menstruation that comes with tab­oos that confine women to the dark corners of their homes. The absence of a pad used to instil dread in rural women all those three days.

Coimbatore-based Muruganantham, had married in 1998. Once he saw his wife smuggling a dirty piece of rag into the bathroom, and that’s when he realised most Indian women don’t use sanitary napkins. “She was hoarding dirty rags with which I’d hesitate to clean my two-wheeler. She said commercial pads were too expensive. That impelled me to find a low-cost solution,” he recalls.

It took eight years of trial and error for the man to perfect the machine that would make low-cost pads.

Muruganantham’s wife was the first to reject his pad, which was nothing but a wad of medical cotton tightly rolled up and held together by a string. After his own sisters refused to use them, Muru­ganantham enlisted a few medical college students to try out his product. He gave them a feedback form, and found that two girls were filling up the form for the entire group. “So I tried using my napkin by wearing it with a football bladder filled with goat blood to see if it can absorb the blood. The experiment was a miserable failure. At this, I collected the used sanitary napkins of the college girls for closer inspection at home. When my mother found what I was doing, she left me to live with my sisters,” Muruganantham recollects with candid humour, almost laughing at his crazy journey.

But nothing deterred the man. The school dropout finally found out the secret of the sanitary napkin: it was made of cellulose cut into fibres to enable abso­rption. Now he needed a machine to make the pads. So Muruganantham desi­gned one machine to cut the cellulose sheet into fibre, another to compress, cut and wrap them into usable rectangular pads that would be treated with UV light to make them germ-free. Having worked in a welding shop, he had some knowledge about machines. “It took me eight years of trial and error to design the machines that would make low-cost pads: just Rs 2 each, compared to those made by the MNCs that are priced anywhere above Rs 6 to Rs 100,” he says. Since the machines cost only Rs 2 lakh, they could easily be purchased by self-help groups part fina­nced by NGOs. And he now uses cellulose from wood pulp to make the pads biodegradable.

Making the pads was only the lesser challenge; getting the unschooled women to use them was next, Muruganantham realised. “I had addressed affordability, but what about availability and awareness? So I decided that only women can do these two jobs, since in a village only a woman can talk to another woman about periods. And if a collective of women could make these pads and distribute them they would gain greater acceptability and also remain affordable. The women were also excited about a steady income by making and selling these pads,” explains the social entrepreneur. But first the men of the village had to be convinced.

So when Muruganantham visited villages to speak about the business opportunity, he had to take the permission of the woman’s husband, father and brother and even the village sarpanch to demonstrate the machines and the business model. At the last count, his pads have reached 40 million women, still a long way from the 90 per cent uncovered population. Nearly 5,000 of his machines are working across the country, including the Andaman and Nicobar Islands and the Northeast. “When we installed a mac­hine at Sar Saria village in Uttarakhand, a 70-year-old woman held my hands and thanked me for providing dignity and convenience to her granddaughters, something that was denied to her,” he rec­alls. “Such moments keep me going.”

Muruganantham exhibits an amazing grasp of the market forces dominated by just two big names: Unilever and Procter and Gamble. “Before informed audiences, I openly address these companies by names as I have nothing to be afraid of them. In fact, I told Uni­lever executives (while speaking on rural marketing) that they posed me no threat since they were concentrating only on ten per cent of the women in cities. I had the remaining 90 per cent of the market all to myself,” he shrugs. “In effect, I did not snatch anyone’s market share; INS­tead I created a new market. They cannot compete with me because my costs are low and my reach is far greater. Also theirs is a profit-oriented product, but mine is entirely a need-based product created for social awareness,” he opens up in broken English, peppered with anecdotal truisms.

“When I tell a foreign audience that 90 per cent of Indian women have no access to sanitary napkin, there is a visible disbelief. But there is hardly a ripple when I say the same thing to an Indian crowd. So I have to ask our Indian brothers and sisters, ‘Do you know what our rural women use during their periods? Rags, sawdust, dry leaves and even hay.’ Only then they are shocked.” Such awe tactics are needed to stir up society’s conscience, he believes. For Akshay, wearing an artificial uterus while riding a cycle was tougher than any of his stunt scenes.

Muruganantham is nevertheless disappointed that sanitary napkins have been slapped with a 12 per cent GST. He argues that the health benefit costs of cheaper pads would actually surpass the revenue earned through the tax.

Muruganantham’s hum­our comes in handy in his venture. “When I speak a serious subject in an informal and humorous way, it has bigger impact. So much so, when BBC made a small documentary they first thought of having a voiceover for me. The producer liked my English so much (laughs), he said they were retaining my original voice.” So even in a distant north Indian village, Muruganantham will demonstrate the working of his machine in English while a volunteer will translate it into Hindi. “Call it our little revenge against Hindi imposition,” he jokes.

So how did the movie happen? Twinkle Khanna had called him 18 months ago and the padman least knew the persistent lady at the other end happened to be late star Rajesh Khanna’s daughter and the wife of Akshay. But he found the ent­ire team—Twinkle, Akshay and director R. Balki—as down to earth like him. And enamoured of his English as well. With Balki, a Tamil, though, Muruga­nantham could converse in his mother tongue while ironing out the details. The production team spent weeks at his workshop and home studying his lifestyle and meeting the women in his life.

“They involved me in every part of the project right from the script to the sets resembling my factory. Of course I had to help in designing the sanitary napkin with an artificial uterus filled with blood that Akshay Kumar had to wear and ride a bicycle. He confessed later it was more difficult than some of his stunt scenes as he had to ensure it did not break or bleed,” Muruganantham says. He is confident that the message of PadMan and Akshay’s star value would take him closer to his ultimate goal: employment to ten lakh women, who would make and market his low-cost pads. In turn, they would bestow hygiene and dignity to every Indian woman.