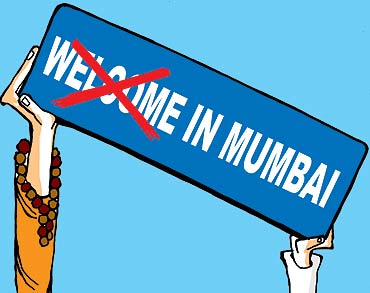 outlookindia.com
-0001-11-30T00:00:00+0553
Raj Thackeray is a painful thorn in Shiv Sena’s flesh. So much so that the party, despite its vintage, just does not know which way to turn. It has been forced into a me-too mode. Indeed, it is said that if Raj and not Uddhav Thackeray had been the successor to Bal Thackeray, he would have run the Sena much the same way the Maharashtra Navnirman Sena (MNS) is being run.

Raj was widely seen as the best choice to succeed the Sena chief. A clone of his uncle’s, he had the words and the style to communicate militantly and connect with the masses. He had assumed that his succession was an event foretold. But when the cousin—less a public person and more a palace intriguer—took charge, the split was natural.

Initially, Raj Thackeray tried to develop a different identity for his MNS. He gathered educated young men, including professionals, and dipped into their minds to devise a constructive, long-term strategy. That, however, was not to be. The party was in the incubator for a long time and the cadre started getting impatient. His detractors even pronounced that Raj’s new party was a non-starter.

That’s when the media, not fate, intervened.

The turning point was his speech at a nondescript function in suburban Mumbai in February. Raj had compared his love for Maharashtra to Amitabh Bachchan’s passion for Uttar Pradesh. But the press distorted his words and reported that Raj had criticised the Big B. The young politician issued denials till he became blue in the face. But the media had found its whipping boy. The spin given was that Raj was against Biharis and UPites. And as this anti-north Indian tag stuck, the MNS chief realised he had found a plank that had resonance among ordinary Marathis.

Raj’s mix was a potent cocktail. Its ingredients: Marathi asmita and fears that migrants from Uttar Pradesh and Bihar were snatching away the sons of the soil’s share of the economic pie. But was this true? Maharashtrians love ten-to-five jobs, not businesses, and are not keen to face the hardships a migrant is willing to endure. The latter is ready to undertake any job, even accept lower wages.

Yes, Maharashtrians are argumentative, even cantankerous, but not violent, though they have been tolerant of the Shiv Sena’s actions. Which is perhaps why Uddhav Thackeray, when he became Bal Thackeray’s understudy, decided on a softer line—militant in speech but not in action. Clearly, the Marathi manoos does not approve of the MNS violence though he/she is vocal about the inroads being made by Hindi-speaking migrants.

The issues at stake are more economic than emotional. As per the 2001 Census, over a quarter of all migrants in Mumbai are from the cow belt. When their leaders demanded that the Municipal Corporation of Mumbai allow partial use of Hindi because 20 corporators were Hindi-speaking, fears that politics would slip out of Maharashtrian hands seemed real. Moreover, Bhaiyas are highly visible; they are increasingly seen in satellite towns around Mumbai. At the same time, with every decade, the Marathi population drops by one percentage point. So the cocktail of asmita and economic fears found a resonance.

The portents of the dangerous politics being played out should be a matter of concern for all Mumbaikars. Right now the Shiv Sena wants to prevent the MNS from running away with its old plank and start—in Manohar Joshi’s words in the Rajya Sabha—a "bigger movement". In fact, the party’s mouthpiece Saamna had to claim that "our boys were also there", beating up the Biharis.

The emerging competition could be potentially ominous. The Shiv Sena may be forced to return to its old ways, which Uddhav abhors.

This, incidentally, is the denouement Raj Thackeray is waiting for.

(The author is former Bombay bureau chief of The Hindu)

A Villain Maybe, But Still A Hero