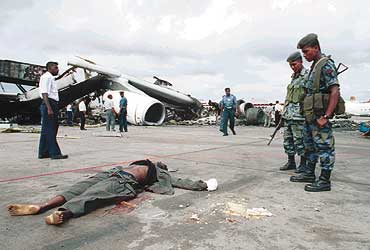 outlookindia.com
-0001-11-30T00:00:00+0553
In the early hours of last Tuesday morning, 14 armed rebels wearing military uniforms cut through the chain link fence just beyond the Colombo International Airport entrance road. Taking off their shoes and lining them neatly, the group walked the two miles to the hangar area which the Sri Lankan air force shares with the island's only international airport. On their way, they passed the quarters of air force officers, fast asleep after a party that had continued beyond midnight.

Soon a series of explosions rocked the airport—within minutes, two Israeli-made Kafirs, one Russian-built mig-27 ground attack aircraft, two MI-17 helicopters and three brand-new K8 trainer aircraft were blown into smithereens. "This does not make any severe dent in the air force's attack capability," says Iqbal Athas, Sunday Times' defence columnist, "but the losses are substantial—they will have to make good the losses at a cost of about $30 million."

The explosions goaded the soldiers into opening fire at the attackers. The rebels retreated towards the international airport across the runway where six Sri Lankan Airline Airbus were parked in the apron, some of them fully fuelled. The rebels blew up two of these immediately. "The attack wasn't aimed at the international airport, but the air force base. The passenger aircraft were just opportunity targets," says Air Vice Marshal (Retd) Anslem Peiris, chairman of the Airport and Aviation Authority.

In an incredible stroke of luck, none of the six aircraft had any passengers. "There was utter confusion. No one told us what to do. Everyone was running around and there were bullets flying all over the place. We ran out of the airport in panic. Outside too bullets were whizzing over our heads," says Astrid De Jong, a Dutch tourist who was at the airport at the time of the attack.

A full-scale gunbattle was now under way. One rebel climbed up to the roof of the terminal building and destroyed another Airbus by firing a rocket-propelled grenade. Three other aircraft were damaged in prolonged gunfire. In other words, half of the Sri Lankan Airlines aircraft fleet had been crippled. By late Wednesday morning, all 14 rebels were dead—two of them committed suicide by exploding bombs wrapped around their waists. Seven soldiers were also killed. Miraculously, there was not a single civilian casualty other than a state television reporter who took a bullet in the leg.

The daring attack took place exactly 18 years after the infamous Black July incident. On July 24, 1983, Colombo was tense after five days of rioting against minority Tamils in retaliation for the killing of 13 soldiers in Jaffna. Late morning that day, a rumour spread like wild fire that Tamil rebels had landed by boats close to the Fort, a thriving business centre. Once the rumour was squashed, the Sinhalese went on an unprecedented rampage, attacking Tamil refugee camps and houses. Such was the terror that thousands of youth crossed over to South India and joined the rebel movement, financed and guided by the Indian government.

Since then, armed forces are placed on alert every year in the week preceding July 24. However, in the past 18 years, the rebels marked the anniversary by either launching an attack weeks before or after. Obviously, this year the Tamil rebels decided to change tactics. Says Opposition leader Ranil Wickremesinghe: "There was enough warning for the government. The rebels had openly said they would retaliate for air strikes launched two weeks earlier.The government should have been prepared. President Kumaratunga, instead of safeguarding the airport and the air base, was busy crushing her political opposition."

The attack has left the nation stunned. Says Athas: "The rebels have demonstrated that they have enhanced their military capability to attack even heavily-guarded installations. The question is whether any place is safe anymore in this country." But military spokesman Brigadier Sanath Karunaratna disagrees: "Luck plays a major role in such operations. They were simply lucky on this occasion. There were shortcomings on our part.... But this does not mean that other security installations are not safe."

Last week's offensive also comes in the midst of one of the worst political crises facing the country. President Kumaratunga's People's Alliance government lost its four-seat majority in Parliament in June when seven members of the Sri Lanka Muslim Congress (slmc) crossed over to the Opposition. Seizing the opportunity, the United National Party (unp) immediately tabled a no-confidence motion against the government. Facing certain defeat, President Kumaratunga prorogued Parliament, calling for a referendum on her proposal to introduce a new constitution.

Without the required two-thirds majority in Parliament to change the current Constitution, Kumaratunga has been talking about invoking the highly questionable 'doctrine of necessity'. "It is a method to justify extra-constitutional means of changing the Constitution," says Dr Paikiasothy Saravanamuttu, executive director of the Centre for Policy Alternatives, adding: "She is doing it at this point to escape the no-confidence motion. If she succeeds, we will have a constitution of dubious legitimacy."

The Opposition responded by taking to the streets. On July 19, tens of thousands of Opposition supporters tried to converge on the city centre. The police burst tear gas shells and opened fire, killing two and injuring 70 others. This was only a prelude to what might follow. For, Opposition leaders have threatened to unleash people's power in case the president continued on her decision to tread the "unconstitutional path." This could only aggravate the woes of the nation, already torn by the separatist war in the north and east.

For the moment, however, there is not a wisp of hope the beleaguered president can sell to the nation.