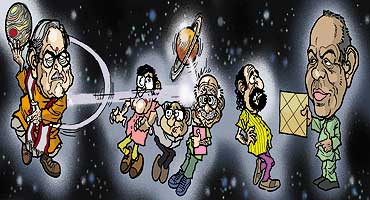 outlookindia.com
-0001-11-30T00:00:00+0553
There are some fights that do neither side any good. Science and technology minister Murli Manohar Joshi and his Sancho Panza, UGC chairman Gautam, have picked exactly one of these in their move to start funding astrology courses at Indian universities. This is brilliant politics—Joshi's market niche in the hyper-competitive world of Indian politics is that of the fearless defender of India's ancient (necessarily Hindu) culture against the "self-hating secular/westernised elite". Being attacked for defending the cause of Vedic Astrology suits him just fine.

There's anecdotal evidence for his tactical brilliance. As his critics inevitably attack a belief in astrology as part of their response, large numbers of Indians, for whom a default faith in astrology is a part of their lives, find their cherished beliefs mocked in public. They will likely respond by digging their heels on the other side of the debate. Perhaps they will even adopt Joshi as their standard-bearer. Indeed, from his perspective, this move had the same compelling quality which V.P. Singh detected in the Mandal Report. Sadly, it also shares with it a feature that all Indians on both sides of the debate would be better off if it had never been invented.

Its political logic notwithstanding, two actual arguments have been marshalled in support of the ugc's move. Let's consider these in turn. The first was nicely summarised by the underemployed K.N. Govindacharya, who said (Times of India, May 28): "This decision has, in fact, triggered a debate as to what constitutes scientific temper. It is well known that gravitational force affects human beings. But just because science is still to evaluate and quantify the impact of planets other than earth on humans, should we dismiss that possibility? Science is a continuous process of learning. Till recently, scientists did not accept the existence of the fourth dimension or black holes. Even now we do not know whether sub-atomic particles are indeed particles, or energy packets, or waves. Science is yet to tell us what exactly life and consciousness are. Just because we do not know about a thing, let us not deny its existence."

This nicely illustrates why Govindacharya is described as an ideologue rather than an intellectual. He is deluded in thinking that science itself offers a basis for defense; au contraire, the worldview of modern science is remarkably complete. To begin with, it is untrue that science is yet to quantify the impact of planets other than earth on humans. It is precisely because the gravitational effects of distant planets are tiny compared to the other forces that shape human biology that scientists are confident we can ignore them. To say that "scientists did not accept the existence of the fourth dimension or black holes" is to falsely imply that the mathematics of Lorentz invariance and singularities in general relativity theory was available in the Vedas or anywhere else and all Einstein and Chandrasekhar had to do was to read them. As for sub-atomic particles, being basis states for irreducible representations of the Poincare group in the Hilbert space of a quantum field theory (Wigner), they have properties that can be characteristic of macroscopic particles or macroscopic waves. It is conceivable that this ontology will be replaced by one involving a yet-to-be formulated "string theory" but it will not change the practical utility of our current formulation for understanding everyday phenomena. The technical basis for this last assertion is the idea of the "renormalisation group" whose spectacular development won Kenneth Wilson the Nobel and this feature of our world is what has allowed the exponential growth of science despite dazzling changes in the "fundamental ontology" along the way. As for life, the basis of heredity was established by Watson and Crick in 1953 and some time in the next decade or two, I expect that the simplest organisms such as bacteria will allow an understanding of their behaviour on the basis of their genetic code and the implied biochemistry. Consciousness is more of a problem, but there seems little reason to think it will not ultimately receive an explanation as an "emergent property" of particular complex systems as opposed to a fundamental ontological element.

Now Govindacharya may say: "But how can you be absolutely sure there isn't more to the story than you have allowed above? After all, I learn from Karl Popper that science contains no true statements, only falsifiable ones." The answer is: if I can't be absolutely sure that there isn't anything else, neither can anyone else. For instance, Govindacharya can't be absolutely sure that tomorrow Vajpayee won't dismiss Jaswant Singh to make him external affairs minister. But he isn't planning on this improbable event. Likewise, India as a society shouldn't plan on the much greater improbability that something will be found which will, in some sense, validate the conjectured link between individual destiny and the motion of heavenly bodies, when an enormous body of knowledge indicates otherwise.

A second rationale offered by Messrs Joshi and Gautam is that there is a demand for trained astrologers which needs to be met. The government, being the mai-bap of the Indian nation, is duty-bound to respond to this. A kinder version (which is not what is on offer) is that in an open society, people have a right to lead their lives as they see fit as long as they do not actively harm others, and if they want a steady supply of astrologers, why shouldn't they have it?

To this, I have no objection. By all means, let Hindu society nourish its traditional institutions, alongside all other groups in the Indian mosaic. I myself feel that the Nehruvian emphasis on a dry "scientism" as a prerequisite for economic prosperity was misguided and confused the need for an industrial culture with that of a scientific temper. More generally, little was gained by decades of organised disdain for traditional Hindu practices which mostly served to demoralise the country.

But it is crucial to remember that the stifling of Hindu civil society was a product not just of Nehru's intellectual stance, but also of his supreme creation—the Nehruvian-Bureaucratic state. The reforming spirit of the Indian freedom movement was killed off when every argument was forced to take its place in a cobwebbed file. I would cheer on Joshi if he wants to undo this by freeing education and culture from the dead hand of state control. Let a hundred schools of astrology flourish—with private money—alongside a hundred private universities where vice-chancellors can focus on producing excellence, instead of kowtowing before the entry-level desks at the hrd ministry. But this is not what he wants to do. Instead, he wants to perpetuate the Nehruvian paradigm and perhaps set up a second ias (the Indian Astrological Service). I can confidently predict that if he succeeds, this will be the end of a vital Hindu culture.Nothing can survive bureaucratic paralysis.

Oddly, this does nothing for the state's own long-term interests either. As with Mandal, this move has no natural limits—if it is seen as politically successful, every group in India will come to ask for its traditional practices to find representation in public universities and such demands will be met by successor regimes. Perhaps it is worse. With reservations, at least one is forced mathematically to stop at 100 per cent, with courses who is to say how many are enough. The result will be to increase the flight away from public institutions—perhaps to Net-based education from private institutions in other countries.

With a mai-bap like the Indian government, who needs enemies? Joshi is eager to remind people that starting with Nurul Hasan, the Left engaged in exactly the practices he is condemned for today. This is completely correct. For decades, we've had to hear moronic incantations of vulgar Marxism ("all history is the history of class struggles") passed off as social "science". Remember that the "prestigious" Jawaharlal Nehru University was founded with no faculty of mathematics or the physical sciences—and leftist members of its professoriate actually argued against the eventual remedying of this omission, one not seen in any university with pretensions to stature anywhere in the world.

But two wrongs do not make a right. The replacement of left-wing mediocrity by right-wing mediocrity is not progress. Joshi is well within his rights to attempt to displace the left trade union that controls Indian academic patronage (a private conversation with the young gifted scholars that populate Delhi's colleges is all one needs to be convinced of this) but he should do so by opening up the system to genuine, part-international, peer review and by looking for conservative projects that are intellectually defensible and for gifted people to man them. The left litany that there aren't academically talented rightists is ludicrous, and there certainly isn't a shortage of conservative intellectual projects.

With so much to be done, Joshi has chosen to fund courses in astrology instead. Worse, he has brought into the open a conflict between the collective import of contemporary natural science and one minor component of the inclusive Hindu mix, that could've been left well enough alone. It is not as if the Hindu in the street goes around under the delusion that he's a puppet of the heavens. Instead, he does what he can, in common with fellow humans across the globe, to deal with life's complexities. In negotiating life's journey through these shifting sands armed with imperfect information, we all need some articles of faith, a sense of destiny perhaps, and as part of Hinduism's offering on this score, there is the lore of astrology. Certainly, Indian politicians who live in the snake pit that shames all others need all the help they can get!

It's hard to believe Joshi has come to this pass. He's a physicist by training—that makes him one of the very few people with scientific training to hold high public office anywhere on the planet. In an age bristling with technological and scientific issues in governance, he should have been ahead of his colleagues in framing questions and soliciting and synthesising expert opinion needed to confront them instead of playing the philosopher-king in speeches to captive audiences at National Science Congresses. There is a new India headquartered at Infosys and at the Indian Institute of Science in Bangalore that has won respect worldwide and would welcome him as their leader if he would listen to them and would promise to extend to the nation the basis of their success.

Perhaps it is not too late for him to change course by taking a leaf out of the book of his fellow MP from Uttar Pradesh, Prime Minister Vajpayee, who happily traded Gandhian Socialism for liberalisation when responsibility beckoned. He can begin by firing Gautam and blaming him for the astrology fiasco. As he has already fired the heads of the ichr and icssr, he has lots of practice, and this time he'll even have reason on his side.

(The author is a professor of Physics at Princeton University)