An actual story told in the actual, possible way -- no fussing over story/plot conventions. 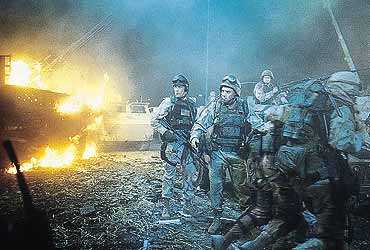 Forget about memorable characters and Oscar nominations. This is an actual story told in the actual, possible way—a long drawn-out focus on the event itself without the mandatory fusses over story/plot conventions. The closest it comes to is a sparring, grimy rugby match: you applaud isolated efforts and moments of brilliance, but the overall action is too huge for any one performance or instant to shine individually.

The fact that Hollywood is finally making films like Remember The Titans and Black Hawk Down—where an episode assumes the shape of a character—shows how things are maturing out there. Ridley Scott's latest takes you to Mogadishu 1993, in the heart of a bitter, urban war between American Delta and Ranger units and the militia of Mohammad Farah Aidid, a local Somalian warlord. The interlude begins when a 45-minute US mission—aimed at capturing Aidid's key aides—turns into a 16-hour ordeal of street warfare.

The '90s mission left 19 Americans and 1,000 Somalians dead; American opinion turned against engagement in Somalia but the heroism of ordinary soldiers, plus the almost old-style nature of the duel, made author Mark Bowden write a gritty account. The film pays homage, in a sense, to both the ground forces and Bowden's vision, which enabled the non-combatant public to feel the heat and the power of a real fight.

The interesting part rests in the way a routine situation turns bad—American Black Hawk choppers are shown flying off to their destination, being looked at by a native kid, who in turn informs the movement through a cordless phone. The information reaches Mogadishu. An insurgent town greets American forces—a Black Hawk is shot down and the general in charge utters the fatal words: "We have lost the initiative."

This kind of a portrayal reminds you about war being a serious game—like a side which has been forced into a defensive position, American soldiers fight desperately to draw the battle. Aidid's forces mushroom from all sides with deadly weapons, forcing the elite forces to battle in alien territory.

They do that with moves and counter-moves, in a bid to outmanoeuvre the enemy—it is as much a thinking match as a bloody one. The process of gore—a soldier performs surgery without morphine in a scene—is inter-cut with bits of humour and the slow burn of real battle. You know that American forces will win, but then you want to see how the Somalians hold them back till they break free.