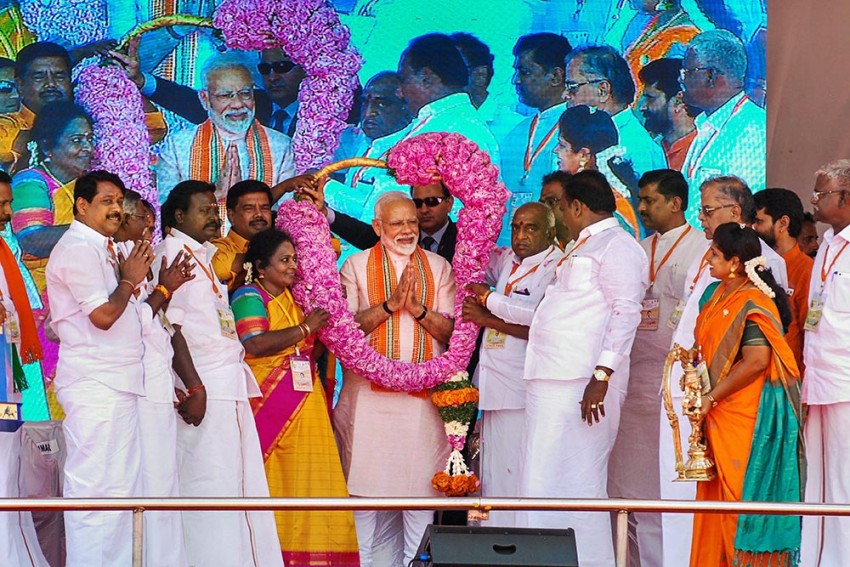 Central ­Emphasis
PM Modi at a BJP rally in Madurai, January 27
Photograph by PTI
G.C. Shekhar January 31, 2019 00:00 IST BJP Needs Allies Or It Would Be Staring At A Big Hole In Tamil Nadu 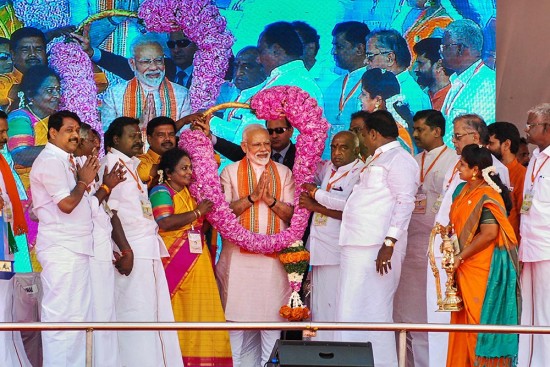 During his one-day trip to Tamil Nadu and Kerala on January 27, Narendra Modi’s chosen medium of expression at two public meetings was English. It was a departure from the past when the BJP strongman had preferred to address the mostly non-Hindi-speaking crowd in Hindi, with an interpreter feeding them the translation in the local language. It has probably dawned on the BJP that in the land that had spawned the anti-Hindi agitation in the 1960s, it was time to bridge the language gap. The realisation might have come a bit late, though, as the Tamil psyche had been laced with shrill anti-BJP propaganda not just by the DMK and its allies, but also half-a-dozen fringe organisations and most Tamil news channels during the past four years.

The principal aim of the anti-BJP narrative was to play on the insecurities of the Tamils that they could be subsumed by the culture and language of North India if the BJP was given even a toehold in the state. In the process, it made the BJP a political unt­ouchable. With the present AIADMK government seen as a handmaiden of the powerful Modi sarkar at the Centre, the picture of the BJP as a big bully from up north was complete. Yet PM Narendra Modi has not given up trying to woo the Tamil voters. 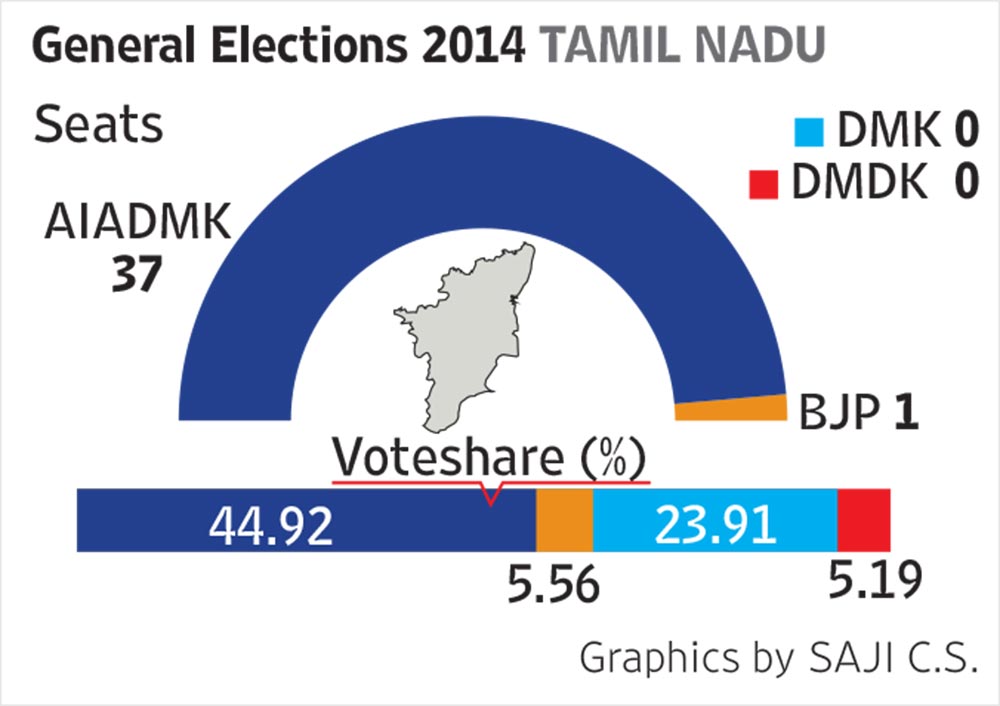 Faced with the prospect of diminishing returns in the north, he needs as many seats from the south. For reaching out to a reluctant AIADMK, he started his Madurai speech by remembering J. Jayalalitha. In Tamil Nadu, the BJP had put together a five-party front for the 2014 general elections, comprising the Paattali Makkal Katchi (PMK), the Desiya Murpokku Dravida Kazhagam (DMDK), the Marumalar­chi DMK (MDMK), the Indhiya Jana­nayaga Katchi (IJK) and Kongu Munnani. The BJP and PMK managed to win one seat each and polled more than 15 per cent of the votes—an imp­ressive figure for a third front. The DMK-led front, which did not include the Congress, came second by voteshare, but failed to win a single set as Jayalalitha swept the remaining 37 of the total 39 seats.

If AIADMK and BJP form an alliance, the smaller parties will join it and leading a front including a national party would give AIADMK a leg-up against Dhinakaran.

The BJP has two advantages in getting the AIADMK to agree to an alliance. The regional party does not have Jayalalitha’s dominating presence that made her project herself as a PM candidate in 2014, resulting in the big win. So having a strong leader like Modi leading its alliance could actually forge some unity within its ranks. And the prospect of sharing power in Delhi if the BJP ­returned to power would be a strong ­incentive for AIADMK cadre. In the past, many pro-BJP voters preferred to vote AIADMK instead of the BJP as Jayalalitha had a greater winnability factor against the DMK and the Congress. Now that Amma is not around, the BJP will actually get its own votes, which, even though miniscule, could get added to the AIADMK’s kitty.

“The AIADMK knows that fighting Lok Sabha elections without a national party and a strong leader could be dicey, especially when the DMK and the Congress have forged a strong front,” says senior state BJP leader S.R. Sekhar. “If we fight separately, both of us would lose badly. So it is better to fight together with other like-minded parties such as the PMK and the DMDK, and try to win at least a dozen seats. The primary aim should be to deny the DMK front the clean sweep it is so confident about.”

If the AIADMK and the BJP do form an alliance, other parties like the PMK, the DMDK, Puthiya Thamizhagam and G.K. Vasan’s Tamil Maanila Congress (TMC)—all with single-digit voteshares—would readily jump on to the bandwagon. Being the largest political outfit in the state and leading a front inc­luding a national party would also give the AIADMK a much-needed leg-up against rebel leader T.T.V. Dhinakaran. Also, only the AIADMK and the DMK know the trick of mobilising votes at the booth level and the secret of delivering cash to voters before polling.

Not everyone in the AIADMK is ena­moured of an alliance with the BJP. “The BJP’s negative image will rub on us,” cautions a senior minister. “It will only further concretise the image that we are their proxy in Tamil Nadu. It is also difficult to forget the insult heaped on us by the central government thro­ugh income tax raids on our ministers and businessmen close to our leaders. Such an alliance may not work at the ground level.” Lok Sabha deputy speaker M. Thambidurai recently voiced this distrust openly: “It is not our job to carry the BJP on our shoulders to help it grow in Tamil Nadu.”

But the big two—CM Edappadi K. Palaniswami (EPS) and deputy CM O. Panneerselvam (OPS)—are keen to have a truck with the BJP as they do not want to be left out of an NDA government if it gets voted back. “If we are not there now, then the DMK will strike a post-poll tie-up as the party has been starved of power in the state and at the Centre,” said an AIADMK functionary. “The BJP’s pockets of support in west and south Tamil Nadu may even help us win there.”

The Congress and the DMK leaders admit they would prefer taking on the AIADMK and the BJP separately. “Dhinakaran may not be a force in the Lok Sabha elections as he would only be concentrating on the 21 assembly seats for which bypolls would be held simultaneously,” points out a senior DMK MLA. “He would also be hobbled by the absence of a common ­symbol since his is not a registered party. Imagine having to campaign for one symbol for each assembly seat, and for a different one for each Lok Sabha seat. Unless he gets a common symbol, most of his votes could mig­rate back to the AIADMK.”

In such a scenario, the AIADMK might actually rediscover some of its mojo. But the BJP has to first neutralise the swagger that the Congress and DMK are presently displaying. The party waited too long, hoping to ride on Rajinikanth’s shoulders whenever he launched his party. But the actor has decided to give the Lok Sabha elections a miss, to keep his ammunition dry for the assembly elections and act in a few more movies. So unless it sews an alliance with the AIADMK, the BJP would be staring at a big hole in Tamil Nadu.