‘BJP Is A Party Representing The Upper Castes... Against Social Justice’ 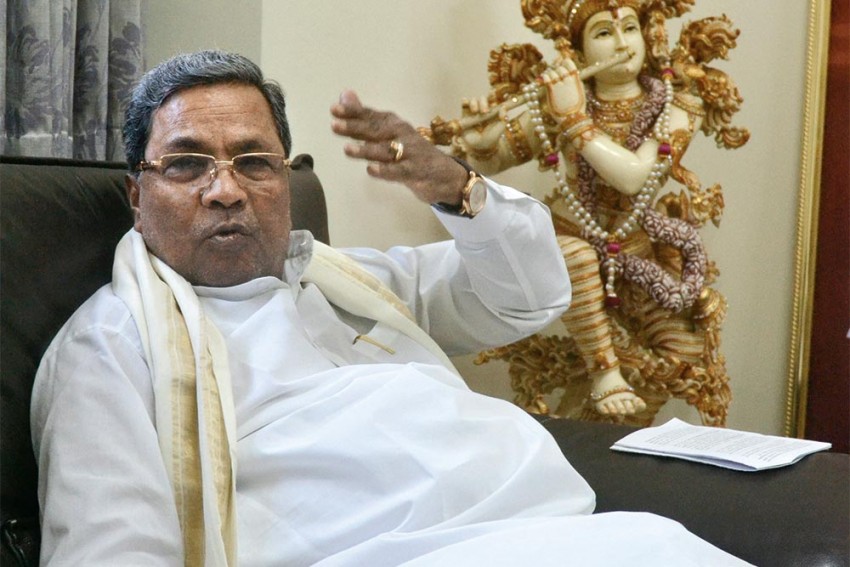 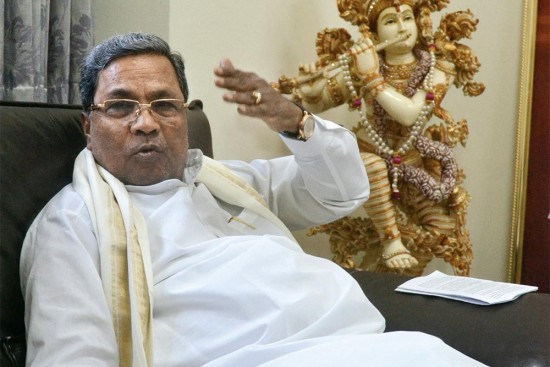 The past couple of months haven’t been easy for Karnataka chief minister Siddaramaiah. He’s had to carefully navigate the emotive Cauvery water-sharing issue—a bouncer that has come hurtling at many CMs in the past. The visual that stood out during the water crisis, however, was Siddaramaiah sitting alongside his one-time mentor and former prime minister, H.D. Deve Gowda of the Janata Dal (Secular)—rem­ember how they had parted ways under unp­leasant circumstances around a decade ago—­discussing a way out.

There have been other challenges too as the Siddaramaiah governm­ent battles one controversy after another in its fourth year in office: the suicide of a police officer whose allegations (in an interview just before his death) caused an uproar in July; the public outcry against a proposed flyover in traffic-­choked Bangalore that has been making news in recent weeks. The controversies are politically motivated, the plainspeak­ing Sid­daramaiah tells Ajay Sukumaran, claiming that his government has delivered on its promises. Excerpts from an interview:

How do you think the legal battle on the Cauvery issue has gone?

I’m optimistic that we will get justice from the court because we have a good case.

You said that the dispute requires a pol­itical solution. Please elaborate.

I meant that the government of India has to make up its mind regarding this. Leaving the matter to the states is very difficult. The Centre should take the lead, intervene and negotiate among the states and come to some agreement. Somebody should take the lead to negotiate. That’s why I requested the Centre to intervene. I requested the prime minister’s intervention in the Mahadayi dispute and also the Cauvery issue. I wrote two or three letters to the PM in this regard, urging him to convene a meeting of all the riparian states. But the government has not responded. We are always for dialogue between the states concerned. We have been arguing and pleading for this but in the past we have failed in the discussions.

Why was there no outcome from the meeting with Union water resources minister Uma Bharti held last month?

During the Cauvery crisis, we saw you meet H.D. Deve Gowda…

As far as the state’s issues are concerned, whether it is the inter-­state water dispute or the border row or the language issue, we are always one.... On the Cauvery issue, I tried to take all opposition parties into confidence. That’s why I met Deve Gowdaji, S.M. Krishnaji and other leaders....to take them into confidence and show to the people that we are facing this problem with one voice.

Does it mean you will be on good terms on most other issues?

I don’t see anything beyond the Cauvery issue...politically. I’m not going to look into it.

Bangalore has a big role in the Cauvery issue. How can its dep­endence on the river for drinking water be reduced?

So far as drinking water is concerned, Bangalore city as a whole is depending on the Cauvery. Earlier, there were tanks to meet the city’s req­uirements, but that is not the case anymore. We have to explore other possibilities such as desalination of sea water and all that.

Scientists have warned that Bangalore will be an unlivable city in five years unless we protect the environment. But there is a proposed steel flyover for which 800 trees will be lost...

We did not prepare this project in any hurried manner. This was initiated in 2010 and I ann­ounced it in my budget speech of 2014-15. A detailed project report was prepared in 2010 and a detailed estimate was done afterwards. We put the details of the ­entire project on a website and solicited the opinions of the citizens. Seventy-three per cent of the feedback is in fav­our of constructing the steel flyover. We are not doing it in a hurry at all.

Why is there so much opposition then?

Whatever the government was required to do, we have done in a democratic manner. And this project was not ­initiated after we came to power. It was initiated when the BJP was in power. Now, for political reasons, they are making an issue out of it...so that our government does not get a good name. The project is totally transparent. We are not hiding anything in this. Whatever information the public wants, we have put it up online. (Since this interview, the Karnataka High Court, hearing a petition by a citizens’ forum and following the National Green Tribunal’s four-week stay order, has imposed a stay on the construction of the flyover.)

You have completed three years in power, but your rivals keep saying that the Siddaramaiah government has not taken off. How do you respond to this?

That is a politically motivated statement. What does it mean when we have launched so many programmes in the social and economic sector—Ksheera Bhagya, Anna Bhagya and Krishi Bhagya? We have also waived off loans of the poor. On irrigation, we have spent more than Rs 40,000 crore in three years, surpassing our promise to spend Rs 10,000 crore every year. In five years, we would have spent more than Rs 60,000 crore on irrigation alone. We had made 165 promises in our manifesto. In four budgets so far, more than 70 per cent of these promises have been fulfilled.

Which of these do you consider to be your biggest achievement?

We are making Karnataka free from hunger. I’m very happy with this programme because the poor need not go to the doorsteps of others for rice anymore. That used to happen in my childhood and that’s why I thought of the Anna Bhagya scheme. There is poverty and everybody cannot get work for 365 days a year. That’s why we launched this.

Within the party, however, you are still facing problems. Many leaders were unhappy after a cabinet reshuffle and senior leader V. Srinivas Prasad even quit as MLA.

See, Srinivas Prasad was in my cabinet for three years as revenue minister. Did he say anything at that time against the government? Was he unhappy at that time? It was only after he was dropped that he started making allegations. How can anyb­ody believe him?

Does the local dissidence worry you?

The party is with us. On the Cauvery issue, the party totally stood by us. Politically also, not only the state unit, even the high command is with us. There is no dissidence at all in the party. Why is Srinivas Prasad leaving the party? Only on the ground that he was dropped from the cabinet. These things happen in any pol­itical party. It is not dissidence.

You have created an identity as a champion of the minorities, the backward cla­sses and the Dalits (the Kannada acronym for this grouping is AHINDA). Your political rivals, especially the BJP, are now taking aim at this plank. How much of a threat is it?

"We have completed 69 years since Independence. There’s no data on each community, their political, economic, social and educational status."

See, it’s a fight between K.S. Eshwarappa and Yeddyurappa. That’s why the former has started this ‘HINDA’ (AHINDA minus the minorities) strategy. It’s for his survival in the BJP. What this means is  that neither Eshwarappa nor the BJP is committed to the welfare of these sections. They are totally against social justice. It was only a fight between these two leaders. The people of Karnataka have understood that the BJP is a party representing the upper castes. It is not for the lower strata of society and is totally against social justice.

The dominant castes are also angry with the caste survey your government has undertaken. What will be the impact?

This is not targeting any community. See, we have completed 69 years since Independence. There is no data or information regarding each community in the society, about their political, economic, social and educational status. We undertook this census to collect this information.

Coming to the Lokayukta issue, Kar­nataka’s Lokayukta was well-­regarded across the country and there was much opposition when you created a separate Anti-Corruption Bureau (ACB). People asked whether it will have the power to investigate fairly or not?

It’s not as if Karnataka is the first state in the country to create an ACB. Both the Lokayukta and the ACB are there in many states—Delhi, Andhra Pradesh and even BJP-ruled states like Rajasthan and Madhya Pradesh.

And yes, they can investigate and regi­ster cases against anybody, including the chief minister. In fact, there are six complai­nts with the ACB against me. Investigations are going on.

What will be your key focus areas in the next two years?

Still, you have faced other controversies. Take, for instance, the suicide of IAS officer D.K. Ravi last year. It did cause quite a public outcry.

See, the D.K. Ravi case has been referred to the CBI and the final report has not been submitted so far. According to us, it was a suicide. The Opposition and the public demanded that the case be ref­erred to the CBI and we did that. Let the report come, then the truth will come out.

What about the police force? In recent months, one woman police officer has quit and two DSPs committed suicide in the midst of allegations of political interference...

No, there is no political interference. These are all baseless allegations. These (incidents) are not because of the state government’s actions. The officer resig­ned on her own. The government has only acc­epted her resignation. Or take the M.K. Ganapathy incident. That matter was referred to the court and the court directed an inquiry by the CID. The CID inquired and submitted a report in which the allegations made by the opposition were found to be not true.

Last year, the opposition also made some allegations against me and K.J. George. It was said that we were involved in a lottery racket. I referred that matter as well to the CBI.

During the BJP’s rule, I was leader of the Opposition. I had demanded that a number of incidents be referred to the CBI. Not a single matter was referred to the agency. Why have we done it then? Because we are clean.

The Last Lap Of A Slow Ascension