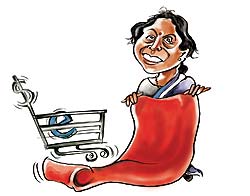 1. Shopping for FDI in e-commerce

The government has taken an in-principle decision to allow FDI in e-commerce, despite it being a contentious issue for the retail trade. Last week, Union commerce minister Nirmala Sitharaman stated that the government was open to reviewing its earlier stand of not allowing FDI in e-retail. More recently, the minister met the stakeholders—including leading Indian e-commerce players—to discuss the issue. Unlike the opening up of physical retail to FDI—which has only seen one entrant, Tesco, into the country—there is a lot of interest from overseas investors in e-commerce in India. A decision could be around the corner.