Bite Before The Balm

The FM has, at last, bitten into tax reforms. It may hurt a while, but it will heal. 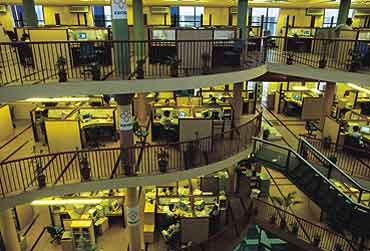 outlookindia.com
-0001-11-30T00:00:00+0553
If there's one area in Budget 2005 where finance minister P. Chidambaram has gone in for sweeping reforms, it is in the realm of personal income tax. In a swoop, it has changed the face of your pay slip and the shape of your wallet. In the run-up to the budget, Chidambaram had given notice that he would be looking to implement these long-overdue reforms. It was universally known that these would be directed at two problems: one, the number of taxpayers was way too low; and second, there were too many escape routes—in the form of exemptions that enabled people to get away with paying much less tax. The Kelkar task force on tax reforms had already set out a blueprint to address these issues, and the FM used it as his point of reference. Sceptics had doubted his ability to garner political support to pull off these reforms, but he seems to have taken a bold gamble.

First, of course, the income tax slabs have been recast. Now, those with annual incomes up to Rs 1 lakh will pay no tax; the exemption limit is higher for women (Rs 1.25 lakh) and senior citizens (Rs 1.5 lakh). There are three other tax slabs—Rs 1.0-1.5 lakh (with a 10 per cent tax rate), Rs 1.5-2.5 lakh (20 per cent) and above Rs 2.5 lakh (30 per cent). The 2 per cent education cess remains in place, but the 10 per cent surcharge now applies only to incomes over Rs 10 lakh (against Rs 8.5 lakh earlier). In his budget speech, Chidambaram said the rejigging of tax slabs would prove a boon to taxpayers in all the income categories. Illustratively, if you have a taxable income of Rs 2.5 lakh, you will save about Rs 24,000 in taxes.

The restructuring of tax slabs and the resultant lowering of tax liabilities, an inducement to get people to pay their taxes, came along with another major reform measure: the abolition of two provisions that provide tax breaks—Section 88 (which provided for a tax rebate on eligible investments up to Rs 1 lakh a year), and Section 80L (which provided for a deduction on interest income up to Rs 15,000 a year). In their place, the budget has introduced a new Section 80C, under which investments up to Rs 1 lakh qualify for a deduction. The investments that qualify for the Section 80C deduction are the same as those that came under Section 88, and more may be added. However, there will be no sub-limits on specific categories of investments now.

A deduction is more tax-efficient than a rebate: it lowers your taxable income—and hence your tax liability—more substantially than a rebate. Illustratively, if you're in the 30 per cent tax bracket, under the earlier regime, your investment of Rs 1 lakh would have earned you a Rs 15,000 tax saving. But now, that same investment will translate into a tax saving of Rs 30,000. But there's more to this change.

Since Section 80L has also been abolished, your interest income will now be taxable. The tax advantage that investment options like the post office schemes and a few other some small savings instruments enjoyed are now history. With the removal of the tax bias, you may now be investing in an instrument based on other considerations like liquidity, risk and return, rather than being solely influenced by tax saving.

In terms of long-term direction, Budget 2005 seems to be moving us to a time when very few tax exemptions will be left. Tax breaks will now evidently be linked to end-use and not the instrument chosen. For instance, Chidambaram has retained tax deductions on interest repayments on home and educational loans, on medical insurance premiums, and on medical expenses for disabled dependents and for disabled people.

For the salaried, the proposed fringe benefits tax on companies' perquisite payments bodes ill. Reimbursable cash benefits like telephone, sponsored travel, gifts and club membership, which are effectively income for employees, have been made taxable. Where such benefits are enjoyed by a group of employees, the employers have to pay the fringe benefit tax on the computed value of the benefits. What this will do is make it unattractive for companies to give such benefits, considering that they will be taxed. In the long term, employers are likely to remove these benefits from the pay structure and offer comprehensive pay packages.

So, if you have been enjoying some tax-free perks, say goodbye to them. In future, for the same cost-to-company, employers will probably give a higher basic pay and thus make a higher contribution to employees' provident fund (EPF). As long as the EPF continues to earn higher interest rates, your retirement savings will grow faster, but in the short term, you will have less money in your hand to that extent.

Another important budget announcement influencing your earnings relates to pension reforms. Chidambaram has announced that he will be tabling a bill in Parliament to set up the Pension Fund Regulatory and Development Authority (PFRDA), to replace the ordinance issued in December 2004. When this bill becomes law, pension reforms will finally be kicked off.

The regulatory body will first set up a central record-keeping agency (CRA) that will keep a record of your contributions and retirement accumulations. The PFRDA will also select vendors of investment products to put on its panel. These vendors will provide you with pension products that you can choose on the basis of factors like risk appetite or term. This system is expected to provide better services and greater information about your retirement savings on a regular basis, besides ensuring that your retirement accumulation continues uninterrupted, no matter how many times you change jobs. It promises to do more than this.

Once the PFRDA is in place, it is likely to slowly bring under its supervision all existing provident fund organisations, including the Employees' Provident Fund Organisation (EPFO), which currently functions as a pension player and self-regulates itself. This is expected to bring large changes in the way these organisations function. For one, you can expect them to be more responsive to your personal needs. Second, you will be able to rely on PFRDA, much like irda in insurance, to redress grievances or to seek punitive action on defaulters, including employers, pension companies, and intermediaries.

The good thing about most of these radical reforms is that they are progressive in nature, with features of the tax systems now in use in many developed countries. It will take a while for us to get used to the new realities, but, overall, the long-term outlook is positive.