The biryani boom is upon us. The dish has become a delivery staple. 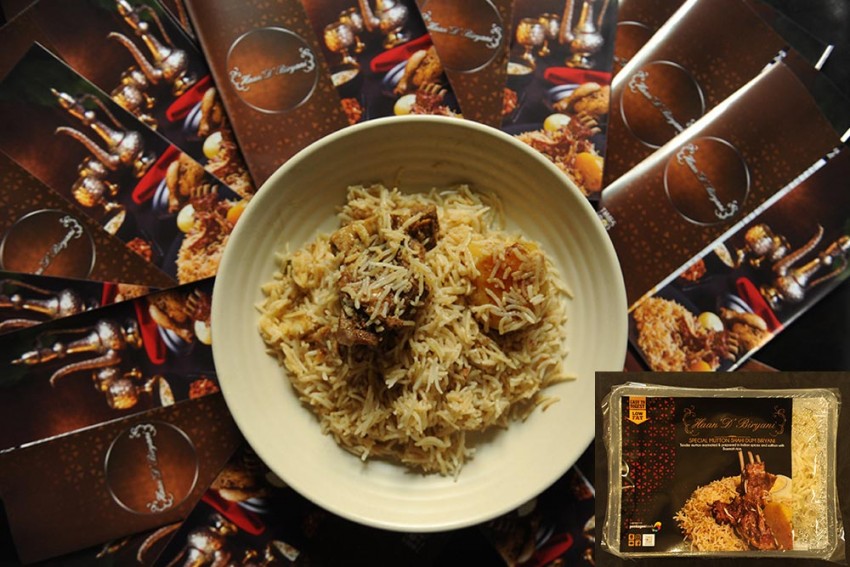 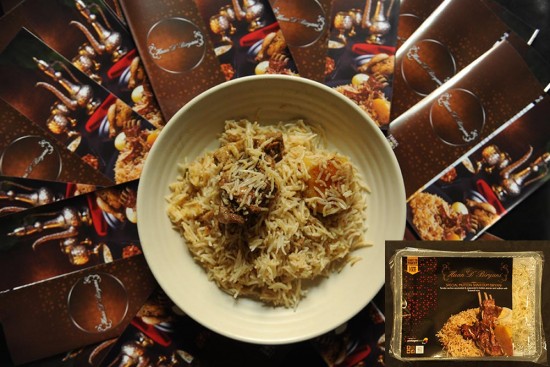 It used to take weeks to procure the right ingredients, days to prepare and many anxious hours of tantalising ant­ici­pa­t­ion to serve. The biryani was  once accustomed to pride of place in the kitchens of nawabs and maharajas, beg­ums and courtesans, but nowadays  it has beco­me egalitarian. Gone are the days when one would look for special occ­asions to have biryani, which would be few and far bet­ween. As the number of places selling and delivering it slowly catches up with the purveyors of pizza, burgers and noodles, the biryani, with its rich and myriad flavours, seems to have found the recipe for a new kind of popularity.

It’s of course lip-smacking, but in addition, “The biryani is a complete meal in all forms. It contains carbs, proteins and vitamins,” says Ashfaque Qureshi, chef and managing director at Grande Cuisines of India, a leading food consultancy. Qureshi, who’s seen the revival of the dum pukht style of cooking from close quarters at the hands of his father, master chef Padma Shri awardee Imtiaz Qureshi, feels that the sudden proliferation of exclusive biryani delivery joints is only “helping the biryani”. “There is a demand for this…The reason for these home ­del­ivery joints coming up is the young boys and girls who are working late nights in offices which are practically twenty four-seven, and they need to eat at odd hours,” he observes. With pizza, rolls and fried chicken having ruled the roost for years now, biryani seems to be slowly, but surely, inching past them in the fast-food race. And why not, asks Prateek Jajodia, a Bangalore-based data scientist, who feels that a plate of biryani is an obvious choice over a bowl of pasta. “Indians are predominantly rice-eaters and they feel full after eating something rice-based rather than a pasta or salad. It’s also value for money. The quantity of biryani you get for 200 rupees would be much more than pasta for the same price,” he remarks. 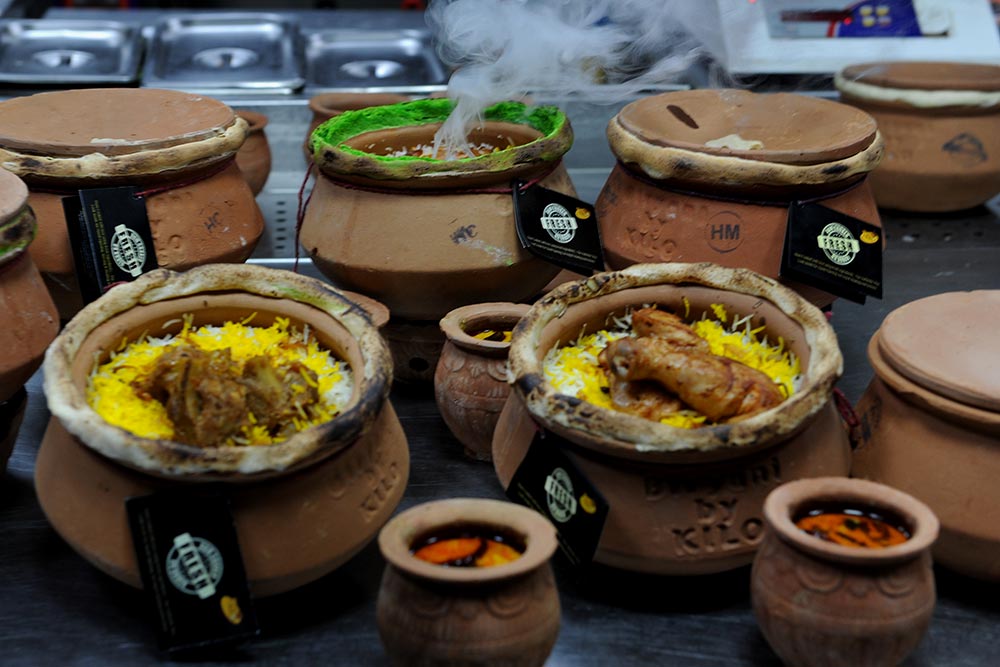 Gurgaon-based Biryani By Kilo delivers its fare in earthen pots

However, being “value for money” is just one of the many factors enticing millennials into ordering a packet of biryani while sitting in the comfort of home or the office. Even when several eateries are just a stone’s throw away, long work hours and longer travel times demand the luxury of enjoying a meal without having to step out. As e-commerce platforms like Swiggy and Zomato brought people’s favourite restaurant dishes to their dining tables, cloud kitchens upped the ante by focusing on delivering quality food to the Indian gourmand’s work desk. And this only means that there’s a new stage for the royal biryani to conquer. “Behrouz sells one packet of biryani every two seconds,” says Sagar Kochhar, group CMO of FFSPL, the parent company for food-tech brands like Behrouz, Faasos and Oven Story among others. Behrouz, one of the most well-known names for ­biryani in the food-tech sector, was ­established in 2016 and has its headquarters in Mumbai. It already operates in 15 cities across India, with multiple kitchens serving each location, including tier-two cities like Nagpur, Vadodara, Indore and Bhopal.

“Indians are rice-­eaters and feel full after eating ­something rice-based rather than pasta or salad. Biryani is also value for money,” says data scientist Prateek Jajodia

“Biryani is not considered junk food. There are other options like pizza and burgers, but biryani is closer to your daily meal,” Kochhar says. However, this close proximity to the daal-chawal that the biryani enjoys on the familiarity scale does not make it an ordinary dish by any standard. The slow-cooked, or dum-made, delicacy—in which the meat leisurely simmers in its own juices—is pregnant with flavours and aromas that change and adapt themselves according to the region. While some are heavy on spices, like the Hyderabadi variant, the Calcutta incarnation prefers an egg and a potato to go with the meat and rice. But no matter what the variant, taking shortcuts with the method and time is “not an option”, according to Kaushik Roy and Vishal Jindal, the founders of Biryani By Kilo, a delivery joint headquartered in Gurgaon.

Founded in 2015, Biryani By Kilo cat­ers to Delhi-NCR and Mumbai, and del­ivers its fare in handis or earthen pots, sold by weight. Their website comes with a disclaimer: “Orders take 1.5 hours to two hours to be delivered as we do fresh dum cooking in individual handis once the order is received. You will love the fre­shness of the biryani once you open the sealed lid before the celebrations.” For Roy and Jindal, succeeding in a race against food items moving in the fast lane cannot come at the expense of the quality of the food they are selling. “Biryani can be India’s answer to pizza, burger and chow mein…it is a versatile and wholesome dish. But there are a lot of places which don’t make the biryani according to the dum method,” Jindal says. Roy goes on to add that the “tra­ditional food” is “made in a very hygienic fashion” in their kitchens—a feature that he feels is missing in the traditional ­establishments selling biryani in the older parts of town.

When it comes to the range and varieties in which the biryani is available today, there’s no dearth of space for chefs and restaurateurs to innovate. “Just like language changes every 17 kilometres in India, the flavours and components of the biryani change every five kilometres,” says Dr Izzat Husain, a celebrated Awadhi chef who’s a consultant at Spellbound restaurant in Noida. Husain’s lineage can be traced back to Wajid Ali Shah, the last Nawab of Awadh, who was also credited with popularising the Awadhi, or Lucknowi biryani as we know it today. “Biryani is a gypsy food. People who would travel in the camel caravans would use lamb meat, rice and different spices to prepare it. Biryani moved to different regions and changed a lot over time. Local ingredients were included as it started travelling,” Husain says. While many have traced its roots to Iran, its evolution has made it equally popular in the Deccan region of India. “Hyderabadi biryani is our best-selling biryani,” says a Freshmenu employee, corroborating the fact. Freshmenu, a food-tech chain set up in 2014, boasted of only a ‘global’ cuisine until August last year when they added a range of biryani to their repertoire. Unique names like ‘wings biryani’, ‘lollipop biryani’ and ‘steak biryani’ feature alongside the more traditional-sounding Calcutta biryani, Mughlai biryani and Rajkot biryani, among several others. With kitchens loc­ated within a five-kilometre radius of the delivery site, Freshmenu currently serves Bangalore, Mumbai, Delhi and Gurgaon. The company has to imp­rovise on a dish that is widely popular for its traditional recipes in order to keep their promise of delivering a ‘fresh menu’ every day. On the other hand, Behrouz claims to be tapping into the dish’s Persian roots and serves a variety of biryani cooked the ancient way. 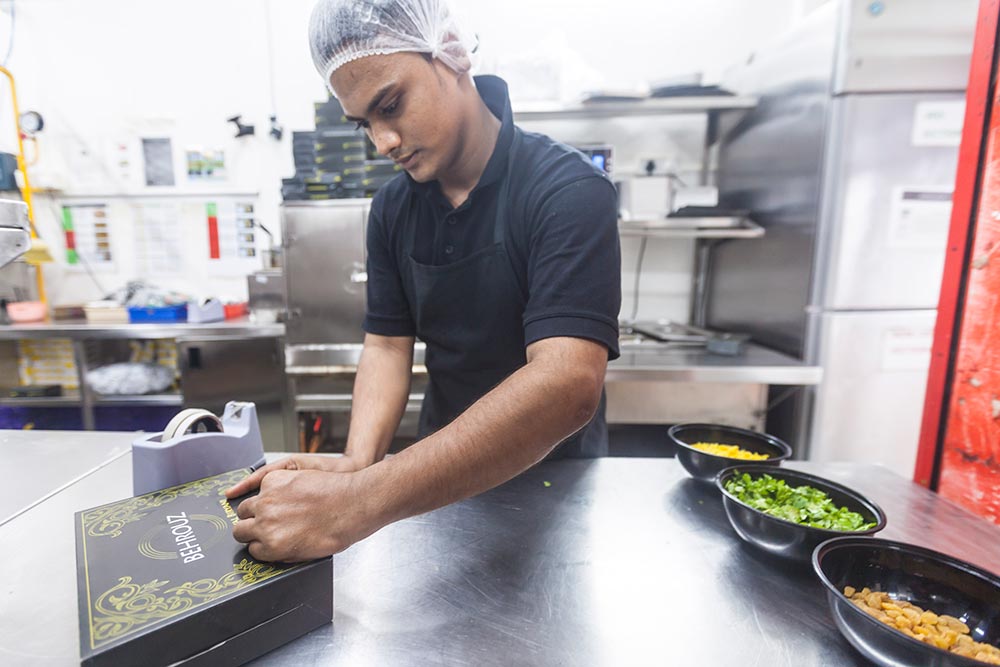 A Behrouz kitchen in Andheri, Mumbai.

Biryani Blues, another Delhi-NCR based delivery start-up, seems to be gathering a loyal following in the capital. “I absolutely love the mutton biryani by Biryani Blues,” says Shruti Roy, a marketing professional living in Delhi. “I eat biryani once or twice a month and I always order in,” Roy adds. The increase in demand for deliveries has pushed traditional restaurants across the country into tying up with food aggregators like Swiggy, Zomato and Uber Eats. “Forty to fifty per cent of our sales now come from deliveries,” observes Ishtiaque Ahmed, a partner at Shiraz Golden Restaurant in Calcutta. Serving the erstwhile second city of the empire since 1941, the restaurant has had patrons like Amjad ‘Gabbar Singh’ Khan and the Pakistani cricket team, among countless others. “Earlier people would have biryani during festivals or weddings, but now they prefer having it at home while watching an IPL match. Who wants to step out then? The money spent on travelling to a restaurant also costs more and inc­reases the bill!” Ahmed laughs. The traditional biryani giants down south weigh in on this ­observation. According to Omer Adil, managing director of Shadab Hotel in Hyderabad, “approximately seventy to eighty per cent” of their orders are placed online. However, the 28-year-old establishment employs over a hundred people and continues to serve tourists, market workers and IT professionals at their dine-in through the day. “Most people still prefer our traditional ­biryani. Our takers have not reduced in number,” Adil says.

“It has gone back to being an easy, one-pot meal for the common person. Nobles had their fine pulaos, but biryani was food on the move, food for the masses,” says food historian Pritha Sen.

The popularity of biryani has remained largely unscathed. It has not only braved the scorching rise in prices of goods but has also managed to win the hearts of a growing ‘health-conscious’ population. Sparing a thought for such ‘healthy eaters’ is Kolkata’s family-run Haan ‘D’ Biryani, a delivery joint started in 2015. “The recipe we follow was first cooked at our place keeping in mind our grand­father, who loved biryani but couldn’t eat it because he was diabetic. Even though our biryani was low-fat, people loved it and that’s how we decided to start selling it from home,” says Abhijit De Sarkar of Haan ‘D’ Biryani.

As this iconic dish of Indian royals bec­omes increasingly accessible to more and more groups of people, one finds biryani being made not only in exp­ensive restaurants and new-age cloud kitchens, but also in roadside stalls with big handis wrapped in red towels. “It has gone back to being what it was—an easy, one-pot meal for the common person,” says Pritha Sen, former journalist and food historian. “The aristocracy had their fine pulaos, but biryani was food on the move, and that’s why it was food for the masses,” Sen says. With the dish coming full circle in terms of popularity, what lies ahead for the beloved biryani? “Its popularity in dep­artment stores—in frozen form—might increase!” predicts an optimistic Ash­faque Qureshi. But until then, let the magic cooked in the humble handis take over the world, one grain at a time.

This Planter Doesn’t Stop The Elephants