Birds Of A Feather Flu Together 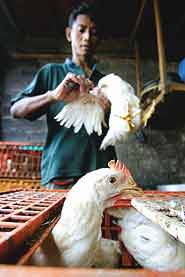 It may not be time to panic yet, but it is certainly time to prepare. The current strain of bird flu—also known as virus H5N1—which started out in South Korea in 2003 is now endemic in many parts of Indonesia and Vietnam, also Cambodia, China, Thailand and maybe Laos. H5N1 only affects birds at present—and humans who come into direct contact with the infected birds. Although millions of birds have caught the disease, only 117 people have caught it in Southeast Asia so far. Of these, 60, or over half, have died.

WHO officials are now warning that H5N1 could mutate to become more easily transmissible among humans. The rapid spread of bird flu over the last two weeks has also increased the probability of a human pandemic. This week, it was confirmed that the H5N1 strain had been discovered in Romania and Greece—and in a tropical bird imported into Britain. Over the last five years, the High Security Animal Diseases Laboratory in Bhopal has screened over 17,000 poultry for the presence of bird flu viruses. "There is no evidence of H5N1 so far," says Dr H.K. Pradhan, joint director. But with the migratory season picking up—India is on the flight path of birds from the Mediterranean, Central Asia, East Asia and the East Atlantic—infected migratory birds could mingle with the local poultry population, spinning the situation out of hand.

Pandemic fears have also sparked a pharma war. While Swiss pharma giant Roche—the only producer of the anti-viral drug, Tamiflu—has approached the Indian government to sell the drug in the Indian market, there are reports that Roche will not be able to produce enough Tamiflu to go around in the event of a worldwide pandemic. Indian drug firm Cipla has also announced that patents be damned, it will supply a generic version of Tamiflu more cheaply by early next year.