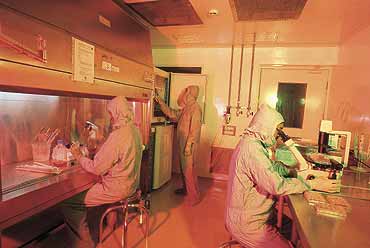 It's here that Koduru Ishwari Varaprasad, 52, achieved with panache what bigpharma couldn't. In 1997, he and his argonauts created India's first genetically-engineered (GE) hepatitis B vaccine: Shantha Biotech's Shanvac B. It captured 40 per cent of the market and unleashed a price war that four years and more competitors later has resulted in the vaccine being available for Rs 50 per dose!

Shanvac was the first stone that dropped into India's placid biotech waters, setting off ripples that are now waves. Start-ups are mushrooming, with venture funds from banks, financiers and governments. The department of biotechnology (DBT) has announced an ambitious 10-year vision—vaccines for cholera, malaria and TB, biofertilisers, biopesticides, transgenic crops, gene therapy trials against cancer. State governments—notably Karnataka, Tamil Nadu and Andhra Pradesh—are bending over backward to lure firms into their "genome valleys". Foreign firms and research institutes are rushing in. The Tamil Nadu Industrial Development Corporation (TIDCO) and US firm Genome Technologies are collaborating to set up a Rs 4.5-billion genomics and bioinformatics project in Chennai.

India's biotech boom could even dwarf software in coming years, if you trust the most optimistic projections. Much of our $2.5 billion (Rs 11,750 crore) biotech market currently relies on low-end products like vaccines, but experts predict that as more start-ups come up, that could change dramatically.

Indian biotech received its strongest shot in the arm when the US National Institutes of Health (NIH) announced that Reliance Life Sciences (RLS), along with the National Centre for Biological Sciences (NCBS), Bangalore, would be among the 10 institutions worldwide eligible for federal funding for stem cell research. Embryonic stem cell research is hot because these are nature's blank slates, capable of evolving into any human cell type. They are thus vital to replacing dysfunctional cells to treat debilitating diseases like Alzheimer's and multiple sclerosis.

Labs around the country are abuzz. RLS expects its work on skin grafts to move the fastest. Skin has application for burns, ulcers, cosmetology. "We've invested US $5 million already, going up to $25 million," says spokesperson K.V. Subramaniam. Research on adult stem cells is also hot. Damage to the limbus, which generates the ocular surface of the eye's cornea, causes blindness. Doctors at Hyderabad's L.V. Prasad Eye Institute have succeeded in culturing the tissue and grafting it on to a diseased eye. This treatment is available only in the US and Taiwan.

The unravelling last year of how our 30,000-odd genes are spelt has created huge amount of data. Scientists need to make sense of this genetic Tower of Babel—which genes make what proteins and what duties these proteins perform. Hyderabad-based Centre for Cellular and Molecular Biology's (CCMB) Rs 8.5-crore research facility, the first of its kind in Asia, will hunt for new genes and proteins that may help identify the genetic root of diseases like cancer. Says CCMB director Lalji Singh: "India offers a unique storehouse of clinical samples of unparalleled diversity in terms of dietary habits, genetics and the spectrum of diseases."

Delhi's Centre for Biochemical Technology (CBT) too is in hot pursuit of such a dictionary. Early this year, it tied up with the Nicholas Piramal group to exploit human genome data for the development of next generation medicine.Says CBT director Samir Brahmachari: "The Piramal Group will couple these with their own resources to develop drugs for diseases like diabetes,asthma and schizophrenia."

The need to dive into this ocean of genetic data for hidden treasures has created a whole new discipline—bioinformatics, the science of using information technology to decipher the genomic jumble. Thanks to a flourishing IT industry, bioinformatics is today the darling of venture capitalists, drug firms and, of course, IT majors. So, Satyam Computers has signed a five-year alliance with the CCMB to create, store and annotate genetic databases, and is angling for contracts from global bigpharma to sequence genes and build protein catalogues. Strand Genomics, a Bangalore-based bioinformatics start-up, is designing tools to accelerate drug discovery.

The ultimate products of these efforts are still some years away. Meanwhile, companies like Shantha are working on several other recombinant-DNA drugs. In February, Shantha hopes to launch Shanferon, an interferon (an anti-cancer drug), at one-fourth the imported price. Other products to come are human insulin, streptokinase (for heart patients) and monoclonal antibodies for treating cancers.

Another promising start-up is Hyderabad-based Bharat Biotech International, which, in 1998, launched its GE hepatitis vaccine Revac. Bharat, according to its vice-president M. Kuppuswamy, now plans to set up a Rs 100-crore biotech facility to "produce at least 10 new products in the next three-four years". Wockhardt's hepatitis B vaccine, at Rs 50 a dose, is the cheapest in the market and has the largest sales after Engerix B. Another Wockhardt product is EPOX, a GE erythropoetin used to treat chronic kidney failure and cancer. Future products: recombinant human insulin and interferon.

But much before Shantha, Reliance and others jumped into the ring, Bangalore's Biocon was blazing a successful trail. Founded by Kiran Mazumdar Shaw way back in 1978, Biocon today claims a quarter of the world market for pectinase, an enzyme used in fruit juice and the bread industry. Biocon has now branched out into high-growth pharmaceuticals like statins—a cholesterol-lowering drug—whose sales are today more than twice those of its enzymes. The profits are pouring in. Biocon's turnover has soared from Rs 1 crore to Rs 150 crore in the last decade. Last fiscal, Shantha made a cool Rs 16-crore profit on Rs 32 crore of sales. It plans to tap US capital markets in 2002. Last year, 4 per cent of Wockhardt's sales came through biotech; this will double this year. "We'll go global by 2003. After four years, biotech will drive our growth," says CEO Habil Khorakiwala. There are some, though, who feel there is too much hype about India's biotech revolution. Says P.M. Bhargava, who founded CCMB and now advises biotech aspirants: "Lalji and I meet at least one company per week, and most haven't the faintest idea what it's about. All just want quick returns. They think BT is like IT." Virender Chauhan, director of the Delhi-based International Centre for Genetic Engineering and Molecular Biology (ICGEB), is blunt in his analysis: "Almost all the biotech products so far have been indigenous versions of existing products. It is beyond any Indian drug firm to even think of bringing out a novel product, let alone new drugs." Clearly, Indian biotech has to innovate to attain the CII-projected $4.5-billion (Rs 21,150 crore) market in 2010.