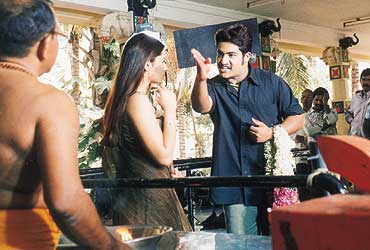 outlookindia.com
-0001-11-30T00:00:00+05:53
Move over Chiranjeevi, Venkatesh and Soundarya, debutants are the toast of the season in Telegu cinema today. But among the hot nyts (new young things), one is more special than the others. This swarthy hero doesn't have the chocolate looks to set the box office afire. But his face and name are tickets to instant fame. For one, the young man shares an uncanny resemblance to his famous politician grandfather. He even has the same name. In Andhra Pradesh, where movie stars are demi-gods and sons inherit their father's fan clubs, Nandamuri Tarakarama Rao, or NTR Jr as he's better known, is being touted as the natural heir to a staggering celluloid legacy. Six years after his death, NTR remains the undisputed king of Telegu cinema—India's largest movie industry after Bombay. Now his fans are looking to his favourite grandson to recreate the magic.

It didn't begin that way, though. The child of a second wife of NTR's son Harekrishna, NTR Jr grew up on the fringes and didn't even get to see his grandfather till he was well past his fifth birthday. One day the grand old man himself asked to meet the child, who everyone claimed looked just like him. The boy had been named Tarakarama, after his paternal grandmother, but NTR reportedly took one look at him and decided to give him his own name. "From that day onwards, grandpa and I...we shared a special bond," claims the teenage hero. He says NTR insisted he spend every Sunday with him, no easy task given the fact that the latter's day began at four in the morning. "Sometimes I would feel lazy or I had to study for my exams but tata (grandfather) always had his way and made sure that I was there by 4.30 every Sunday morning." And he claims he's in the movies because of a promise made to his grandfather to keep the NTR name alive.

So it is. At 19, NTR Jr is already a veteran of five films. The trained Kuchipudi dancer began as a child actor and did bit roles in two movies, including NTR's doomed pet project Vishwamitra. His first real break came a year or so ago when Ushakiron, an influential banner in Telegu cinema, launched Jr as a hero in Ninnu Chudalani (Waiting To See You). The movie didn't do too well but it paved the way for his next venture, Student No. 1, a college romance. Made on a budget of Rs 1 crore, the film went on to gross Rs 30 crore. His next film, Subbu, bombed. But Student No. 1's success and the NTR name helped him sign up six more films. Father Harekrishna insists the teenage hero will gross "more than Rs 100 crore, what all his grandfather's films could have grossed together".

Producers agree that NTR Jr has a headstart. But they warn it will take more than the halo of a legacy to keep drawing the crowds. "There's no doubt the NTR charisma is still a big draw. But in the end, it doesn't matter who the star is. The movie has to be good to draw crowds," confesses R. Raghuvendra Rao, a veteran director who has directed all three generations of the NTR family.

Rao believes the race for the true heir to the NTR legacy is still wide open. The patriarch had a formidable brood of seven sons and four daughters. Films are generally a hereditary business here, so it's not surprising that at least four of his sons joined the movie trade: two as actors and one as cameraman, while the fourth manages the family-owned studio. However, though Harekrishna and brother Balkrishna have both been acting, there's been no 'direct' sibling rivalry so far. Balkrishna cast himself as the hero and projected himself as the heir to his father's legacy, while the more amply endowed Harekrishna satisfied himself by dabbling in character roles.

However, the family's Generation X is turning the old equations upside down. The 42-year-old Balkrishna is in no hurry to retire, but is feeling the heat from the newfound success of his nephew.He tries to avoid all questions about him. Meanwhile, yet another teenage NTR grandson has just changed his name from Oblan to a more saleable Nandamuri Taraka Rathnaa and is all set to begin shooting his first film. "NTR is a brand name. Everybody wants to cash in on it," grumbles Balkrishna, who was the first to benefit from it. Clearly, the battle for NTR's celluloid legacy is not finished yet.