In a 550 km Awadh stretch, the Modi wave is yet to be realized 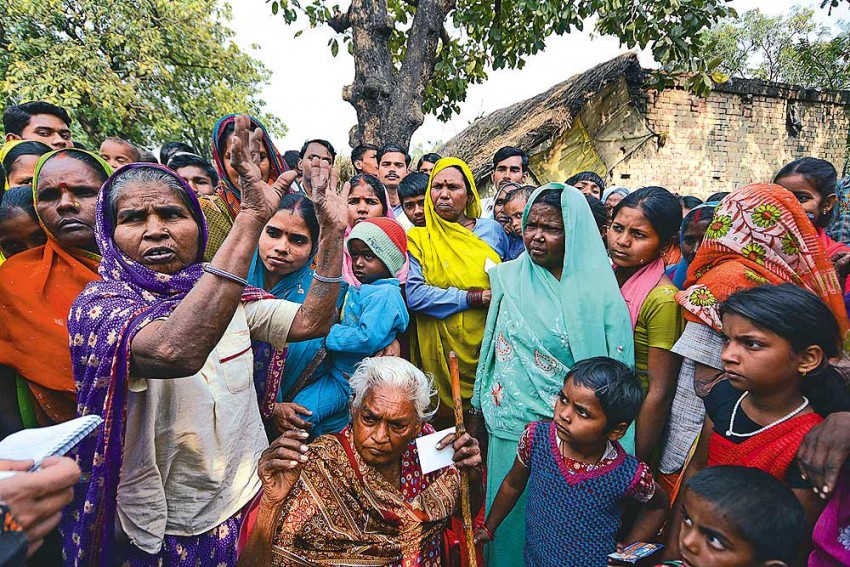 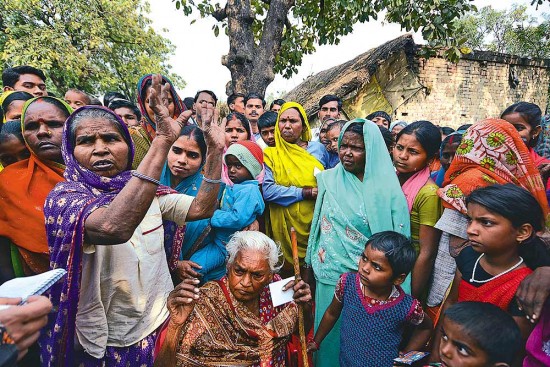 When one hunts for a wave in the heart of Uttar Pradesh, one comes up against impediments such as caste, community, villages without electricity, entrenched local parties. The ‘Modi wave’, if it does reach the shoreline where people speak the lilting Awadhi dialect, will be no tsunami but at best an arithmetical pro­pos­ition that clicks because of votes divided among opposing parties and anti-incumbency against both the Centre and the state.

Enter the villages of Gonda and Basti districts and you find people talking not about Modi but about the electricity they do not get. In a 550-km journey across the Awadh belt, there are also many complaints about the poor sugarcane support price and the government’s failure to make payments on time. In rural areas, the fight appears to be between the traditional state players—the Bahujan Samaj Party and the Samajwadi Party. It is only when you stop at a market town or a kasba, and strike up a conversation around any tea shop, that you’ll find Modi enthusiasts. Ask their castes and they are likely to be Brahmins, Thakurs, or in Gonda district, quite a few Kurmis. (The seat is currently held by Kurmi leader Beni Prasad Verma of the Congress, but people think the ruling party isn’t a serious contender this time).

At Chapia Mod in Basti district, a little kasba off a winding and potholed road that leads to a nati­o­nal highway, a crowd gathers in the bazaar on seeing a visiting media team. Quick to state their support for Modi, they declare. “BJP nahin, hum Modi ko vote denge (not BJP, we’ll vote for Modi).” The sitting MP from Basti is from the BSP but it was the SP most of the forward castes had voted for in the assembly polls. Disillusionment, though, has been quick to set in with the regime in Lucknow. Says Hariram Pandey, a teacher in the local school, “Lehar bhi hai, vichar bhi hai (there is a wave and an idea)” that the support for SP should shift to the BJP. Peshkar Singh, a Thakur farmer, concurs with enthusiasm. Those conducting surveys will have no problem finding Modi supporters; they are waiting to be quoted, unhesitant in their choice, free of any fear.

Was it crowd psychology or the desire to belong that led 24-year-old Abdul Ansari also to tell this corres­pondent that he too would vote for the BJP? A choice he declared loudly enough for all those at the chai shop to hear. Ansari says he is training with the Sony company in Mumbai but will vote from his village home. He says he is young and sick of traditional parties. He wants growth and he believes Modi can deliver that. A booming voice interrupts him. “They’re all talking nonsense,” thunders Raj Kishore Singh, a Kurmi farmer. “What will Modi do for them from Gujarat or Delhi? I am voting for the SP because the local MLA is accessible and listens to our problems.”

At this very point, a most interesting visitor joins us. Madho Ram Verma, from the Kurmi community, is wearing a saffron scarf and carrying a pitcher of ganga jal. Part of the RSS-VHP cadre, Verma is working hard this election. “We must work for Modi because that is one way of realising that we are a Hindu nation,” he says. He reveals that the cadre has come not just from UP but other places too. “No one else bothers about the Hindu samaj. They’re just running to please Muslims who keep gro­wing in numbers. People here are saying Modi but I say BJP is the party that’ll at the right time make our dreams come true.”

In Lucknow, residents show SMSes citing two ‘facts’: how many Muslim legislators there were in 1947 and how many there are now. The other is the usual figure bandied about before any mobilisation about Muslims “breeding” and taking over India and their men seducing “Hindu kanyas” (damsels). Such muck is now par for the RSS/VHP course, but it is cert­a­inly worth noting at a time when the BJP is at pains to claim that Modi’s ‘India First’ campaign is all about development and nothing to do with communal polarisation. Clearly, the project is on to stoke the old faultlines but present them not as a campaign to demolish an old mosque but to build a leader posited as the ultimate strongman. Do they know of Arvind Kejriwal in these parts? They have heard about the man with the jhadoo but “what is his caste?” asks a villager in Gonda. 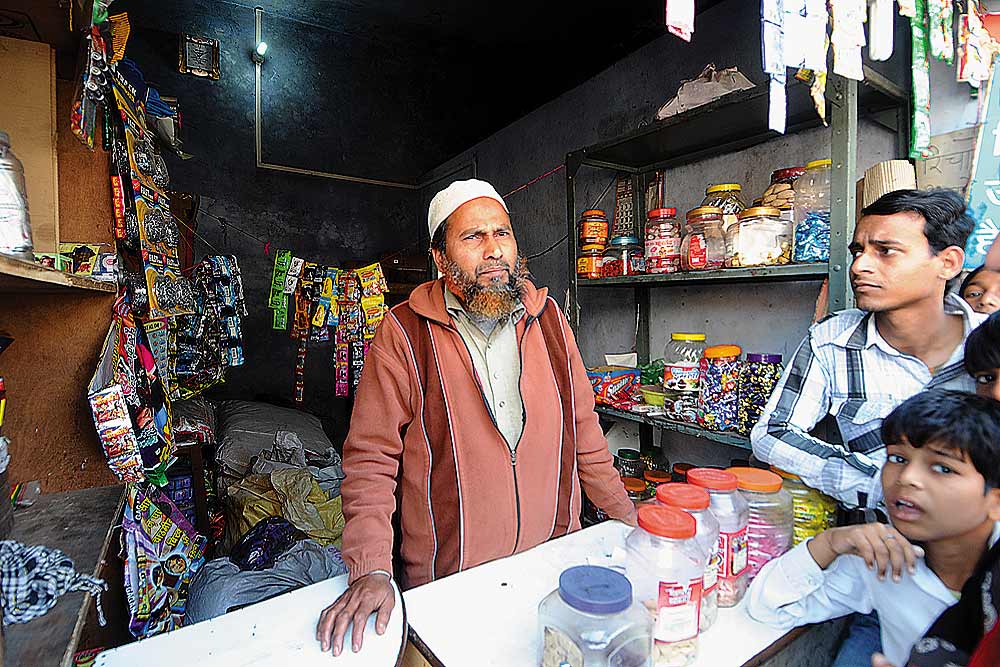 For Vakil Ahmad, a small shopkeeper in the Teer Battawan area of Barabanki, the choice is clear: “First choice Congress, then SP.” (Photograph by Nirala Tripathi)

Birpur village in Gonda gets just a few hours of electricity. Shahabuddin Ansari, a farmer here, says there is not even an electricity pole in his village, just off the road from Birpur. He has come to hear the big candidate from the city, Akbar Ahmed Dumpy, who has the BSP ticket from Gonda (he had won the Azamgarh seat in 1998 and in a byelection in 2008). Logically, things should work for him now. There are 4.5 lakh Muslim voters in Gonda, plus three lakh Dalits, in an electorate of about 11 lakh. A crowd largely made up of Dalits and Muslims has gat­hered to hear him make an aggressive pitch about how “koi mai ka lal” cannot stop Mayawati from becoming the PM.

The villagers here do not talk of any Modi wave but say that the local raja of the nearby estate of Mankapur is trying for the BJP ticket. They are mostly loyal BSP voters here. Says Pyari, a farm worker: “Chaahe maati khodein, mazdoori karein, bheekh maange, haathi pe chhaap lagawenge (whether I dig earth, do labour or beg, I’ll put my stamp on the elephant symbol).” The women gather to laugh and say that they kept voting for the elephant in the assembly polls but the machine kept registering the cycle (the SP symbol). Sharjahan, a Muslim widow, too supp­orts the BSP. They can at least be approached to share their problems, she says, although she grumbles “they do nothing as I have no land and three daughters to marry off”.

The SP conversely is fast losing support in the Awadh belt—largely due to the power situation and the belief that they have not delivered on sugarcane prices. Even supporters from the minority community say they’ll vote for the SP only if the local candidate is strong and best positioned to defeat the BJP. Says a lawyer in Lucknow, “Let us face the simple fact that there may be a section of society that is hoping for good things under Modi. Muslims too would like to be in that position but what can they do? They say Modi made us run and then killed us in Gujarat; Mulayam and Akhilesh let us be killed in Muzaffarnagar. The Congress does not count in most places. As for Behenji, she may not do any good for us but at least she will not get us killed.” 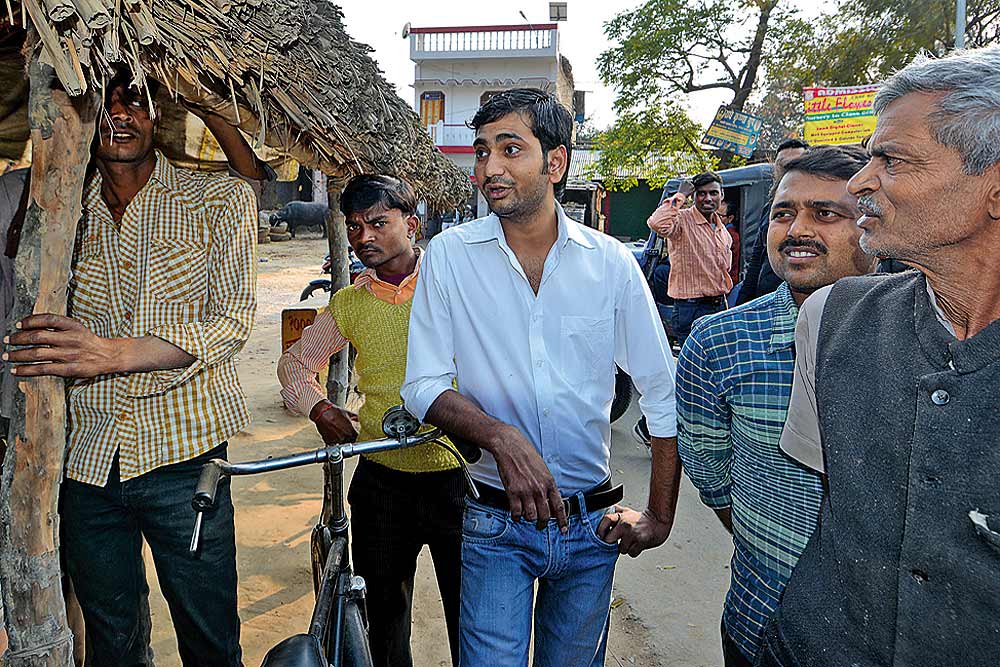 Twenty-four-year-old Abdul Ansari says he is young and sick of traditional parties. He wants growth that he believes Modi can deliver. (Photograph by Nirala Tripathi)

It is early days yet to predict whether the Muslim vote will shift en masse to the BSP as Mayawati too is perceived as someone who can align with the BJP in a post-election scenario, particularly in an atmosphere when small Dalit leaders are joining the NDA front. Yet, a senior BSP leader contends that Mayawati will not do that now as her eventual goal will be the next assembly election and she would want to hold on to minority support. Meanwhile, a former BSP minister says, “2014 is the year (2014) that Mayawati began to refer to the community as Muslims. Earlier she would always say alpsankhyak samuday (minority community). These are significant changes for a leader such as her who has a particular ideology.”

The Congress, it is no secret, is a fast-depleting force in UP. A senior party leader has told the high command that they should be prepared for the worst-ever performance in the state since 1977, when they drew a blank in the poll held after Indira Gandhi’s Emergency. Yet there are seats where the party can win on the strength of its candidates. In Barabanki, for instance, Dalit bureaucrat-turned-politician P.L. Puniya could still pull a turn or two. This is a typical UP seat, changing hands with each poll—held by the BJP in 1998, the SP in 1999, the BSP in 2004 and the Congress in 2009. In the Muslim-dominated Teer Battawan part of Barabanki, many are still inclined to vote for the Congress candidate. Vakil Ahmed, who runs a small shop, says: “First choice Congress, then SP.” What about the Muz­affarnagar riots? “It is far away. I would rather trust the SP than the BSP.” Clearly, minority opinion is divided.

Puniya, meanwhile, reveals that the BJP sounded him out since it does not have good candidates of its own. Indeed, while all BSP, and most SP and Congress, candidates are known, there is a great mystery about who from the BJP will stand where. “The Modi wave,” says Puniya, “has been created by the media that has given Modi events live footage. Now they are hunting for candidates to turn the hype into reality.” Congress leader Rita Bahuguna says that “caste politics in UP is very strongly polarised with regional outfits, so it will be difficult for the BJP to crack it, though they can do better in urban pockets.”

If Modi does indeed stand from Benares and were AAP leader Arvind Kejriwal to stand against him, most observers say the battle will get media attention, but will be a one-sided affair. However, as a BSP minister says, “given the nature of Benares, it will be the cadres shouting Har Har Mahadev who will take over, though Modi can keep talking about India First.” Although AAP and BJP workers clashed in Lucknow, the new party really remains unknown outside the metros.

Benares is considered a safe BJP seat besides having symbolic importance for the cadre. But despite all the bloodshed over Babri, they have never been able to control Faizabad, which includes the Ayodhya assembly segment. The Lok Sabha seat is currently held by the Congress and there is no clarity on how the battle will pan out in 2014 as the BJP candidate remains unknown. The BSP won Faizabad in 2004, the BJP in 1999, and the SP in 1998. On the ghats of the Saryu in Ayodhya, pilgrims continue to take a holy dip but there is no clear consolidation behind the BJP. The party even lost the Ayodhya seat to the SP in the 2012 assembly polls. Modi defini­tely needs a wave and the entire parivar is working hard to generate it.

Lucknow and Faizabad, both capitals of the Awadh court, were once known for the culture of a tiny elite. That refinement is long gone in the stretch of the heartland that will be remembered in contemporary times for the high pitch of “Jai Shri Ram politics” and the low depths of deadening criminalisation. There are also many elephants in the room.

By Saba Naqvi in Lucknow